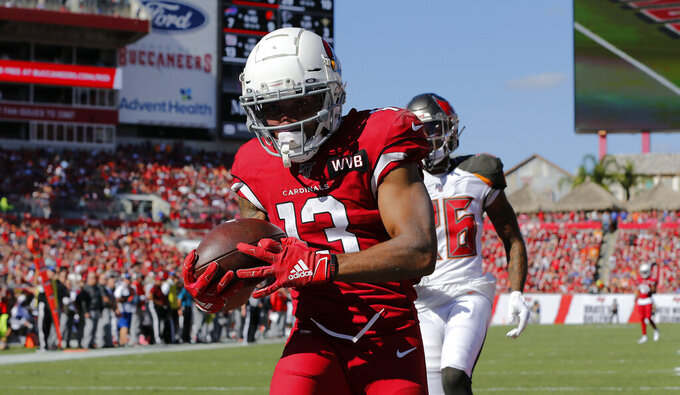 Now optimism has given way to frustration as the Cardinals' rebuild has hit a bit of a snag.

Arizona's latest setback — a 30-27 road loss to the Tampa Bay Buccaneers — might be its most maddening. The Cardinals (3-6-1) did a lot of things right, but a handful of mistakes proved too much to overcome.

"It is what separates the really good teams and the average teams," coach Kliff Kingsbury said. "We had a bunch of those mistakes that make you an average team."

Rookie quarterback Kyler Murray completed 27 of 44 passes for 324 yards and three touchdowns, but he also threw a crucial interception in the fourth quarter that helped Tampa Bay rally for the win.

He wasn't the only one who made a made a big mistake.

A fumble by David Johnson killed one drive. Tight end Maxx Williams lost a ball in the sun and dropped a potential touchdown. Cornerback Patrick Peterson was called for a defensive offside penalty on a missed Tampa Bay field goal and the Bucs made the field goal on the next play.

It all added up to another loss.

"These young guys, they work at it," veteran receiver Larry Fitzgerald said. "It's not like they are just loafing around. The way they go about it is the right way.

"Obviously, to be able to win consistently in the National Football League, it's learned and you know we just have to continue to improve in these type of situations when we get in there. There will be more opportunities as the season goes on."

Arizona continues to move the ball and get lots of players involved. Christian Kirk had six catches for 138 yards and three touchdowns. Rookie Andy Isabella is becoming a bigger part of the offense, with three catches for 78 yards. The 36-year-old Fitzgerald continues to put up good numbers, eight catches for 71 yards.

The defense is giving up a lot of yards, especially through the air. Tampa Bay's Jameis Winston threw for 358 yards on Sunday. The Cardinals got a slight bump a few weeks ago when Peterson came back from his six-game suspension for violating the NFL's policy on performance enhancers, but he hasn't looked like the same player and the rest of the secondary has been inconsistent.

Kirk. The second-year player looks fully healthy after an ankle injury sidelined him for three games. He played with Murray in college and it's obvious the two are comfortable with each other on the field.

"He is a dynamic player," Kingsbury said. "He can play inside, outside, works his tail off and doesn't come off the field. When you work that hard, good things happen to you on Sundays."

Johnson. Injuries and ineffectiveness have derailed what looked like a promising season for the running back through the first month. He was supposed to be healthy for the Tampa Bay game but finished with five carries for two yards.

"He's obviously been hampered by some of his injuries and he's still working through those and getting a feel for it," Kingsbury said.

Kingsbury said Peterson has a calf injury and is day to day.

"Hopefully he's able to go this week," Kingsbury said. "If not, we have the bye and he'll definitely be back the next game."

211 — Murray set an NFL rookie record with 211 straight pass attempts without an interception over seven games before his costly mistake in the fourth quarter.

It doesn't get any easier for the Cardinals, who travel to San Francisco and face one of the NFL's best teams on Sunday before an off week. Arizona's path to victories probably will depend on two things: defensive improvement and cutting down on crucial mistakes.