Loyd has 26, sends Storm over Aces in WNBA semis opener 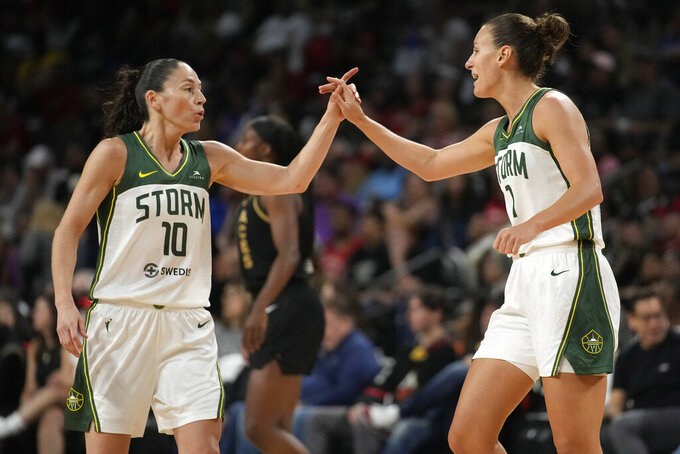 Seattle Storm guard Sue Bird (10) and forward Stephanie Talbot (7) celebrate after a play against the Las Vegas Aces during the first half in Game 1 of a WNBA basketball semifinal playoff series Sunday, Aug. 28, 2022, in Las Vegas. (AP Photo/John Locher) 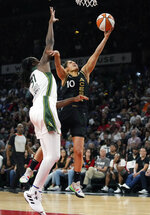 LAS VEGAS (AP) — The Seattle Storm are the lowest remaining seed in the postseason and came in looking to steal at least one of the first two road games against the top-seeded Las Vegas Aces in the WNBA semifinals.

Jewell Loyd scored 26 points, including Seattle’s final six, and the Storm edged the Aces 76-73 on Sunday to take a 1-0 lead in the best-of-five series in front of a Las Vegas playoff-record crowd of 9,944.

Loyd made a go-ahead free throw with 1:16 to play, then a jumper for a three-point lead with 34 seconds remaining before the Storm held on for the win. She had 10 of Seattle’s 16 points in the fourth quarter.

“It wasn’t just me, it was a team effort for sure,” Loyd said. “It helps when you have really good teammates ... you believe in them, they believe in you. That’s the biggest thing for us, is that each of us have to stay confident in what we do and what we can bring to the team. That’s been the key for us.”

“We knew that this was going to be tough. These games against Vegas have been tough all regular season and previous seasons, and we have a lot of respect for their players and what they do,” Stewart said. “We knew that coming here to their home court, we wanted to obviously try to steal one, we wanted to get one and get our momentum going in the right direction.”

Chelsea Gray scored 21 points for the Aces. Kelsey Plum added 20, but missed a tying 3-point attempt with 2.9 seconds to play.

Jackie Young finished with 11 points but Aces star A’ja Wilson was held to just eight on 3-of-10 shooting.

Seattle controlled much of the game, leading through the first 3 1/2 quarters after building a 12-point lead in the first half.

Las Vegas didn’t enjoy its first lead until the fourth quarter, when veteran guard Riquna Williams’ 3-pointer from the corner made it 65-64 with 6:09 left.

The Storm wasted no time in attacking early, as they built a 15-4 lead midway through the first quarter. Seattle got balanced scoring, with five players contributing, including Ezi Magbegor coming off the bench to add four.

Las Vegas struggled to find any sort of rhythm, as a pop-and-shot approach left them with a paltry 5-of-18 (27.8%) shooting performance in the first quarter. Both Wilson and Plum went scoreless while the Storm held a 26-15 lead after one.

“I thought we played tight, especially in the first quarter,” Aces coach Becky Hammon said. “We played like the world was on our shoulders.”

The Aces responded with a much better defensive effort and seemed to be much more comfortable attacking the rim to climb back into the game.

Led by Wilson, the Aces used a 12-4 run to cut Seattle’s lead to 30-27. Stewart took over from that point, scoring nine of her team’s points during a quarter-ending 13-9 run to send the Storm into the locker room with a 43-36 halftime lead.

In addition to Charles’ record-breaking night, retiring Sue Bird had 12 assists and no turnovers. Her final assist gave her a WNBA-record 342 in the playoffs. Lindsay Whalen had 341 in 82 games. Bird broke the record in 57.

NOT SO FAST, VEGAS

Taking a page out of the Aces’ playbook, the Storm outscored Las Vegas 16-0 in fast-break points. Seattle also held the edge with second-chance points, 5-0.

The Storm and Aces play Game 2 in Las Vegas on Wednesday.