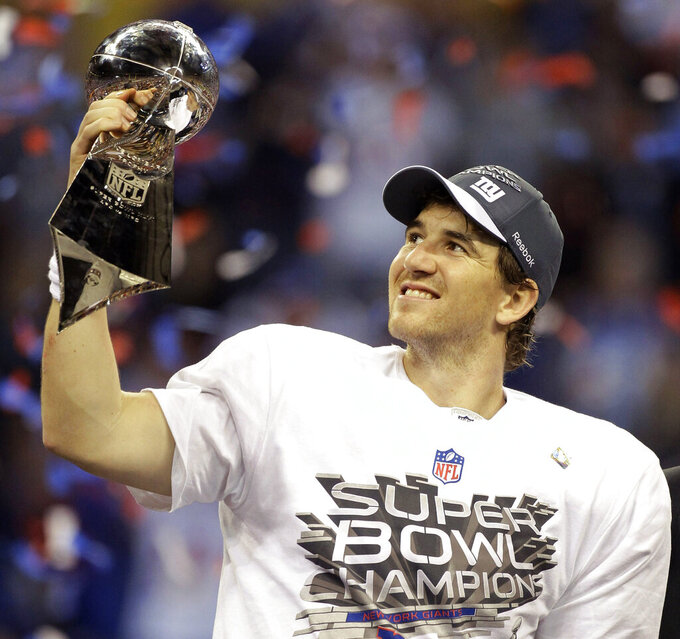 FILE - In this Feb. 5, 2012, file photo, New York Giants quarterback Eli Manning celebrates with the Vince Lombardi Trophy after the Giants' 21-17 win over the New England Patriots in the NFL Super Bowl XLVI football game in Indianapolis. GM Ernie Accorsi got Eli Manning from San Diego in 2004. The deal for the No. 1 overall pick (Manning) saw the Giants send Philip Rivers, the No. 4 overall pick, a 2004 third-rounder, and a first- and fifth-rounder in ‘05 to the Chargers. (AP Photo/Chris O'Meara, File) 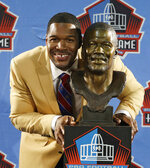 BEST FIRST-ROUND DRAFT PICK: LB Lawrence Taylor. L.T. was the No. 2 overall pick in 1981 behind South Carolina RB George Rogers. In 13 seasons, he transformed the game, his position and the Giants, leading them to two Super Bowls. Taylor left as the NFL's No. 2 sacks leader.

BEST LATE-ROUND DRAFT PICK: LB Jessie Armstead. Taken in the eighth round in 1993 out of Miami. The draft was reduced to the current seven-round format the next year. After three seasons on special teams, he moved into the starting lineup and was chosen to the Pro Bowl for five straight years (1997-2001). An All-Pro 1997, Armstead helped New York to the Super Bowl in 2000, losing to Baltimore.

WORST FIRST-ROUND DRAFT PICK: Clear-cut winner: RB Rocky Thompson, the 18th pick overall in 1971. The kid from Bermuda was a sprinter, not a football player. He played at Hartnell College and West Texas State. Thompson lasted three seasons, playing in 29 games. His biggest contribution was returning two kickoffs for touchdowns and he had one rushing score.

WORST SECOND-ROUND DRAFT PICK: TE Dave Young. GM George Young followed L.T. with a real dog instead of a crazed one. A physical specimen from Purdue, Young had 180 catches for 2,316 yards and 27 TDs in college. But he couldn't block, dropped as many throws as he caught. He kept thumbs in trying to catch passes and hurt them all the time. Young lasted one year (five catches for 49 yards and a TD) as a third-stringer behind free agent Tom Mullady and WFL product Gary Shirk. He also played for Baltimore and Indianapolis in 27-game career.

BEST DRAFT TRADE: GM Ernie Accorsi got Eli Manning from San Diego in 2004. The deal for the No. 1 overall pick (Manning) saw the Giants send Philip Rivers, the No. 4 overall pick, a 2004 third-rounder, and a first- and fifth-rounder in ‘05 to the Chargers. Manning led the Giants to two Super Bowl titles, winning two title-game MVPs. He was the face of the franchise until retiring after last season, started 210 consecutive games from 2004 until 2017. He holds almost every franchise passing record.

WORST DRAFT TRADE: George Young wasted a first-round slot taking QB Dave Brown with a supplemental draft pick in 1992. Brown played six seasons with the Giants and was the starter from 1994-96. He was hurt in ‘97 and lost the job to Danny Kanell. Brown signed with Arizona, finishing his final four seasons as a backup. Those who were available at No. 9 in 1993 included Jerome Bettis and Lincoln Kennedy.

DID YOU KNOW THEY ONCE DRAFTED?: Two late Hall of Fame defensive linemen, Buck Buchanan and Art Donovan. Buchanan was their 19th-round pick in 1963, the 265th selection. He opted to sign with the AFL Kansas City Chiefs, who drafted the Grambling star No. 1 overall. Buchanan won the Super Bowl on Jan. 11, 1970. Donovan was a 22nd-round pick (204th overall) in 1947. He waited three years to start his pro career and never played with the Giants. Donovan played 12 seasons and helped the Colts beat the Giants in OT in the 1958 championship contest, “The Greatest Game Ever Played.”