Luongo's No. 1 jersey goes to the Panthers' rafters 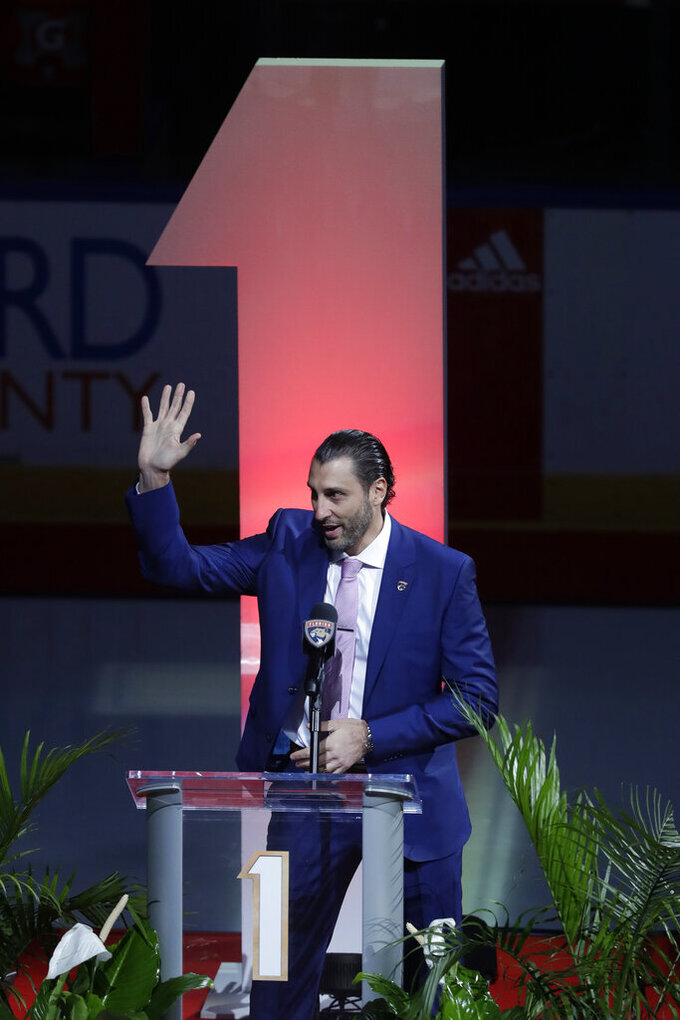 Former Florida Panthers goalie Roberto Luongo waves to fans as he is introduced before his jersey is hoisted to the rafters during a ceremony before an NHL hockey game against the Montreal Canadiens, Saturday, March 7, 2020, in Sunrise, Fla. (AP Photo/Wilfredo Lee) 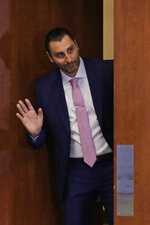 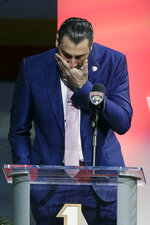 SUNRISE, Fla. (AP) — Roberto Luongo wore the No. 1 jersey primarily because he thought the number signified being the best at everything.

For the Florida Panthers, there was never anyone better.

And now, his No. 1 is the first to hang in the Panthers’ rafters.

Luongo’s jersey was officially retired by the Panthers on Saturday night, the first player in team history to get that distinction. It happened in a pregame ceremony before Florida took on the Montreal Canadiens, the team from Luongo’s hometown and a most fitting visitor for the event.

“I think he is somebody that represented all of the positive values of our game," NHL Commissioner Gary Bettman said. “Perhaps, as importantly, besides excellence on the ice being an important member of whatever community he was living in — this community in particular, which he's made his permanent home."

Luongo spoke for about 12 minutes — showing off English, French and Italian skills — and choked up when talking to wife Gina, who he met after initially coming to the Panthers. Their family has made their home in Parkland, Florida for years and Luongo, now an executive with the Panthers and advocate for those affected by the shooting at Marjory Stoneman Douglas High in Parkland two years ago, says he hopes they never leave.

“Last but not least, I just want to thank the fans,” Luongo said. “Thank you, everybody. It’s been a great ride. It’s been amazing. It still is amazing when I walk in the community and talk to you guys and see you in the grocery stores. You guys have been behind me from Day One and I’m truly humbled to have been through this journey with you guys and thank you for the support over the years.

Luongo wanted a Stanley Cup banner to be hoisted in Florida during his playing days. That never happened, so now he’s vowed to see it occur as a member of the front office.

“We will do that together,” Panthers owner Vincent Viola said.

Luongo walked onto the ice as Frank Sinatra’s “My Way” blared — fitting for many reasons, one being Luongo’s Italian roots, another being that he truly went out on his own terms with three years left on a contract that would have paid him more than $9 million.

There were several speakers during the ceremony, including longtime Panthers goaltender coach Robb Tallas. He had been alongside Luongo for many of his biggest moments — and was 200 feet away from him for another, when he was the opposing goalie for Boston when Luongo and the New York Islanders beat the Bruins 3-0 on Dec. 27, 1999.

That was the first of Luongo’s 82 career shutouts, including playoffs.

“Over the past 20 years Lu was relentless in his pursuit of being the best,” Tallas said.

Another speaker was former goalie Jamie McLennan, who appeared in 17 games for Florida as Luongo’s backup in the 2005-06 season. McLennan spoke before Luongo, saying it would be the only time he would be ahead of his former teammate.

“You’re one of the greatest goaltenders in the game of hockey. ... You’re a great man, a lifelong friend and you deserve this amazing recognition,” McLennan said.

“South Florida’s my home,” Luongo said. “I’m going to be here a long time. I did what I could not only on the ice, but off the ice and I look forward to keep doing that.”