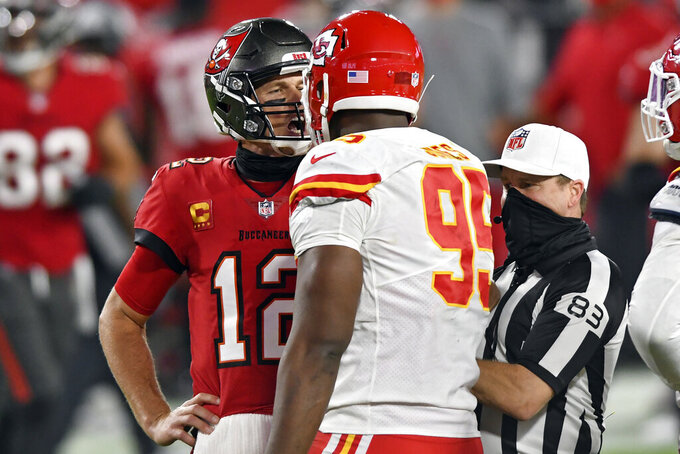 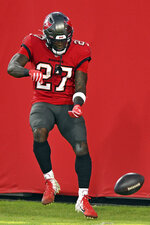 TAMPA, Fla. (AP) — When Tyreek Hill draws single coverage, Patrick Mahomes is going to find a way to get the ball to the Kansas City Chiefs' most explosive receiver.

Mahomes threw for 462 yards, including touchdowns of 75, 44 and 20 yards to Hill, who finished with 13 catches for 269 yards in the reigning Super Bowl champions' 27-24 victory over the Tampa Bay Buccaneers on Sunday.

“It feels good, you know, but I feel like there's still a lot of work for me to do,” Hill said after going over 1,000 yards for the season.

“I'm always trying to get better, got to be consistent with what you do,” Hill added. “Those same people showing you love this week, you make a bad play next week, they're going to hate you.”

Mahomes outplayed Tom Brady to win the fourth career matchup between the MVPs, completing 37 of 49 passes and holding the ball for more than 10 minutes without scoring on Kansas City's last two possessions to put the game away.

Hill benefited from Sammy Watkins' return to the Chiefs lineup after being sidelined since Week 5 with a hamstring injury and got the best of a matchup with Bucs cornerback Carlton Davis, who often had no help trying to contain the speedy receiver.

“We don't get that a lot, especially with that guy and his ability,” Mahomes said. “So when we do, we try to take advantage of it.”

The fifth-year pro's last catch — an 8-yarder on third-and-7 in the final minute — gave Mahomes an opportunity to run out the clock.

“The last one, I learned a long time ago, you don't give Tom Brady another shot,” Chiefs coach Andy Reid said. “That's why he's the G.O.A.T. So, don't give them the ball back. That was the mindset there.”

The Chiefs (10-1) won their sixth straight game and clinched their seventh 10-win season in eight years under Reid.

The defending champs improved to 6-0 on the road and have won nine straight away from home going back to last year.

“Very very few guys that I’ve seen in this league or any league that can backpedal eight, nine, 10, 11 yards in the pocket and throw a dime 25 yards down the field," Bucs coach Bruce Arians said of Mahomes. “And he can read the defense as he does it. That makes him more explosive.”

Brady was 27 of 41 for 345 yards, three touchdowns and a pair of second-half interceptions in falling to 2-2 against Mahomes, who built an early 17-0 lead and also had the Chiefs up by 17 entering the fourth quarter.

Tampa Bay, which has lost three straight home games, never got the ball back.

“We battled back but we left ourselves a big deficit," Brady said. "When you play a good offense we’ve got to do our job offensively and keep them off the field.”

The Chiefs led 20-7 at halftime. The Bucs were fortunate they weren’t in a bigger hole.

Three drives inside the Bucs 20, however, only netted a pair of short field goals. Shaquil Barrett sacked Mahomes, forcing a fumble that William Gholston recovered at the 14 with the Chiefs looking to build on a 17-0 lead.

Bashaud Breeland and Tyrann Mathieu picked off Brady. The Chiefs hurt themselves with a pair of roughing the passer penalties on the 10-play, 73-yard drive the six-time Super Bowl champion put together to close the gap to three points.

The loss comes on the heels of home defeats to New Orleans and the Los Angeles Rams, games in which Brady played poorly and left his new team searching for answers about the offense's inconsistency.

Brady isn't listening to critics, who feel the Bucs aren't tailoring their scheme to what he's done best during his career.

“Just external noise. When you’re losing that’s what you deal with," Brady said. "I love playing with the guys, and the whole organization is unbelievable. I’ve just got to do a better job in the final four games.”

The Chiefs beat Tampa Bay for the first time since Sept. 5, 1993, when Joe Montana led Kansas City to a 27-3 victory. The Bucs had won five straight in a series the Chiefs lead 8-5.

Chiefs: LB Dorian O’Daniel suffered a right ankle injury in the first quarter and did not return.

Buccaneers: LG Ali Marpet returned to the lineup after missing three games because of a concussion. LT Donovan Smith was active after not practicing all week and being listed as questionable with an ankle injury suffered last week against the Los Angeles Rams.