Mahomes listed as questionable for Chiefs' game vs Vikings 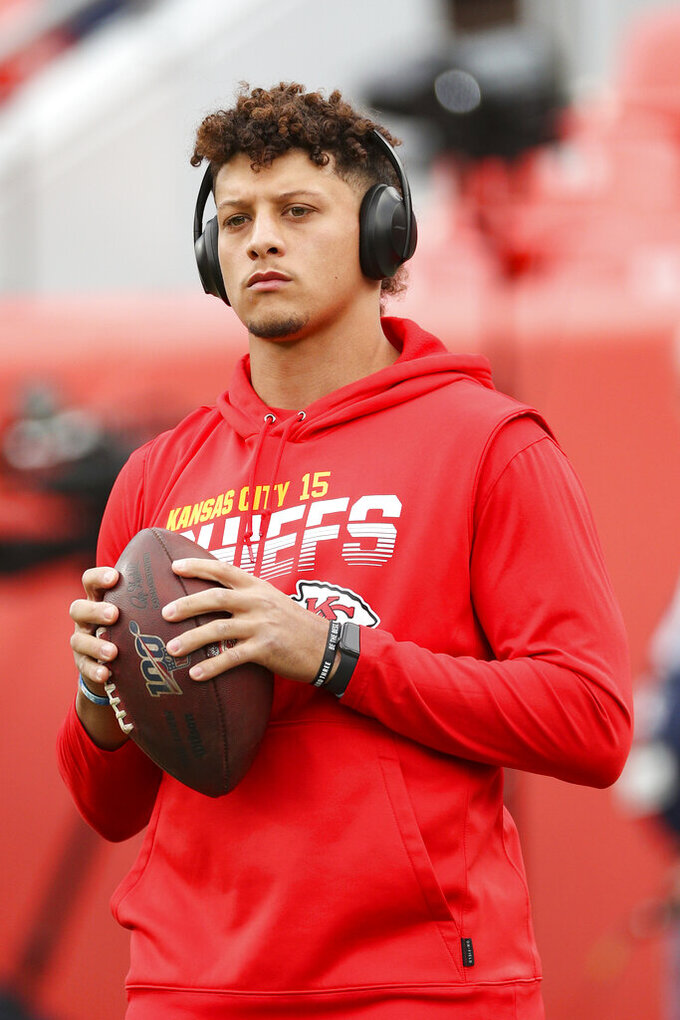 Kansas City Chiefs quarterback Patrick Mahomes (15) throws the ball during warm-ups prior to an NFL game against the Denver Broncos, Thursday, Oct. 17, 2019, in Denver. The Chiefs defeated the Broncos 30-6. (Margaret Bowles via AP)

KANSAS CITY, Mo. (AP) — Chiefs quarterback Patrick Mahomes is questionable against the Minnesota Vikings, raising the possibility the league MVP could return after missing just one game to a dislocated kneecap.

Mahomes practiced on a limited basis throughout the week, just as he did last week. But rather than being listed out, as he was for the Green Bay Packers, he was given the official injury designation that means it is uncertain whether Mahomes will play.

"He did good this week. He added quite a little bit to it," said Chiefs coach Andy Reid, who added little more during the roughly 3 minutes that he spent speaking to reporters Friday.

When asked how Mahomes was moving in practice, Reid replied: "He's doing some good things."

Mahomes split reps this week with backup Matt Moore, who played well against the Packers in a 31-24 loss and would start in his place. But also entering the equation is Chad Henne, who is on the injured list after breaking his ankle in the preseason but could be activated in a pinch.

"Same thing. You go out, you prepare, you get ready to play a game, you value the reps you get and use those to your advantage," Moore said. "You move forward with that mindset. Again, this is nothing new. I've been in this situation before. I'm used to it."

"It's a unique situation right now that we're sitting in," Reid said. "Everyone got ready to go and they're ready to go if they're out here practicing."

The Vikings are preparing for both Moore and Mahomes because each has a unique skillset.

"Sometimes it can be over-talked about: 'Well, they were missing this or that guy.' I mean we lost Adam Thielen in Detroit and we had to keep going, keep moving the football and scoring points," Vikings quarterback Kirk Cousins said. "You don't throw in the towel. "Whether (Mahomes) is out there or not, it's going to be a very, very tough game against a really good team. He certainly is one of the best players in football, and if he's out there, he really gives them a spark."

There were only three players listed as out: left tackle Eric Fisher, who appeared to have a setback with his return from groin surgery; right guard Laurent Duvernay-Tardif, who hurt his ankle against the Packers; and defensive end Alex Okafor, who also has an ankle injury.

That represents an improvement over a week ago, but the Chiefs are still in a precarious situation.

That's because along Mahomes, the Chiefs have several other stars listed as questionable: defensive end Frank Clark returned to practice on a limited basis Friday after missing last week's game with a neck injury; cornerback Kendall Fuller was limited all week after surgery on his broken thumb; and top defensive tackle Chris Jones was a full participant Friday as he comes back from a groin injury.

"He has been out for a little bit," Reid said of Jones, "so I think just getting him out there and moving around a little bit will be good."

Off the injury report entirely was cornerback Bashaud Breeland, who didn't practice Wednesday with a shoulder injury, and left guard Andrew Wylie, who had missed a couple weeks with a sprained ankle.