Mahomes turns things around, Chiefs get back in playoff mix 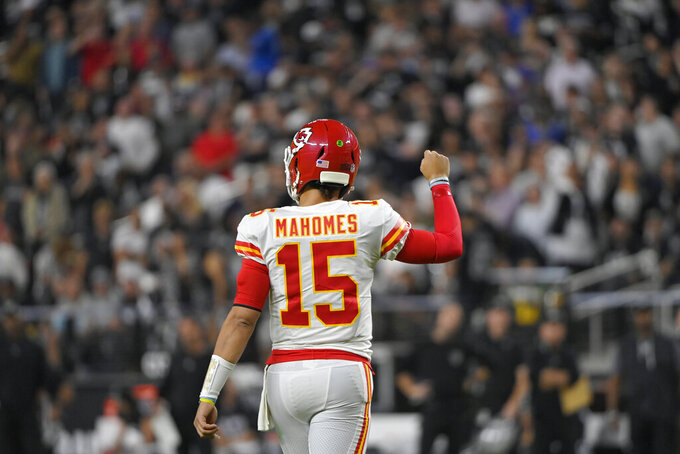 KANSAS CITY, Mo. (AP) — Patrick Mahomes followed three of the worst games of his professional career with one of his best, throwing for 406 yards and five touchdowns as the Kansas City Chiefs rolled to a 41-14 victory over the Las Vegas Raiders.

It was the third time Mahomes had thrown for at least 400 yards and five TDs since he was picked in the 2017 draft, and he became the first player in league history to have at least two of them without throwing an interception.

Here's some more: Hall of Famers Peyton Manning, Dan Marino and Joe Montana are the only other quarterbacks with three games of 400 yards and five touchdowns.

“We obviously hadn't offensively played the way we wanted to,” Mahomes acknowledged, “but we found ways to get wins. Guys have just been steady with the process of getting better and better. I thought pregame we felt that energy and guys wanted to be on ‘Sunday Night Football’, playing in a stadium like (Las Vegas) and against a team like that."

The performance by Mahomes wasn't stunning by itself; he's had five games with at least five touchdown passes, and he's thrown for thousands of yards. But the fact that it followed a few straight duds certainly raised some eyebrows.

The streak began against the Titans, when ended his long touchdown streak ended while throwing an interception and getting sacked four times in a 27-3 rout. He followed with a dink-and-dunk performance against the Giants that included a TD pass and another pick in a narrow win, then a win over Green Bay in which he threw for just 166 yards with a score.

Some people were wondering whether the 2018 league MVP had lost his mojo. His confidence was shaken, his footwork was a mess. Some even suggested he was irreparably broken and that the Chiefs' championship window had closed.

Mahomes put those naysayers to rest on Sunday night in Las Vegas.

“He comes to work every day, trying to get better, and this was when things were smooth and when we were winning a lot of games,” Chiefs coach Andy Reid said.

The result was another vintage performance by Mahomes in a victory over a bitter AFC West rival, one that put the Chiefs (6-4) back atop the division with the Cowboys coming to town on Sunday.

Not surprisingly, Mahomes was chosen the AFC offensive player of the week Wednesday for the seventh time in his career.

“He gets here early, stays late and meets with the offensive linemen. He gets in there and gets everybody together," Reid said, “and they do their thing besides what the coaches are demanding from him. That's what he does.”

NOTES: Reid said it's possible Clyde Edwards-Helaire (ankle) could return for the first time since Week 5 on Sunday, but the Chiefs also have a bye the following week. The Chiefs could elect to give the standout running back extra time to get back in the mix. “If we feel like he's not ready,” Reid said, “we won't put him in there.” ... RT Mike Remmers (knee) returned to practice Wednesday. His backup, Lucas Niang, remained out with a rib injury. ... The Chiefs promoted QB Shane Buechele to their 53-man roster after Cardinals coach Kliff Kingsbury — Mahomes' coach at Texas Tech — attempted to sign him off the Kansas City practice squad. “I had to tell Kliff to stay away from my guy,” Mahomes said.