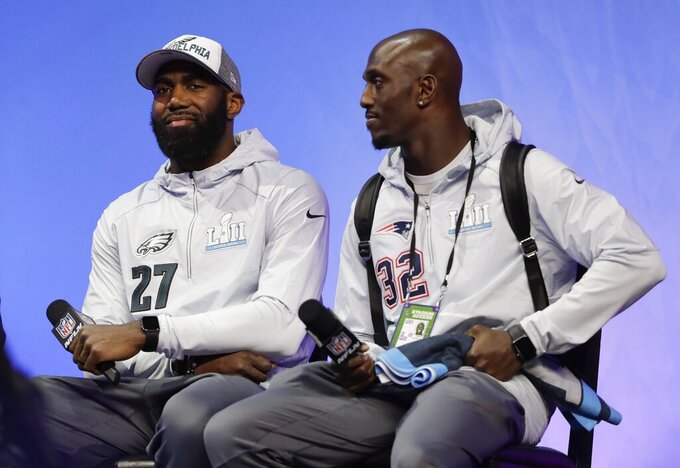 Malcolm Jenkins is passionate about many subjects, including mental health awareness. Going to weekly therapy helps him cope with stress and he wants young men to know it’s not a weakness.

Jenkins, a two-time Super Bowl champion with the Saints and Eagles, spent time Tuesday with students in New Orleans talking about the importance of mental health and psychological effects of racism.

“I don’t think I have overcome (racism),” Jenkins told The Associated Press. “I think it’s something that I deal with daily. I just have learned the tools to maintain and cope. For me, the more I try to deal with these issues and try to face these things head on, the more stress that comes along with it. And one of the things I had to insert into my weekly routine is therapy. And so mental health, anxiety, depression, all things that I had to deal with, every week for the last three years, I speak to my therapist just to be able to have a place to process my own feelings, my own stress, because it’s real.

“And these things sometimes we can suppress them because they’re not as overt as we think. But it’s in policies and the way you walk into a room and people address you or people look at you. All of these things have an effect on you. And so it’s just important that we create some awareness around that, dialogue around it, and create safe spaces for Black boys to be able to explore who they are unapologetically.”

Jenkins is the executive producer of “Black Boys,” a film that focuses on social and emotional effects of racism against Black men and boys. Jenkins, Tennessee Titans star running back Derrick Henry and Baltimore Ravens defensive end Calais Campbell are partnering with Old Spice to bring the documentary to students who will participate in virtual class discussions about the film’s exploration identity, opportunity and equity in America. Old Spice recently launched a 10-year program to increase high school graduation rates in underserved communities.

“We’re using the film `Black Boys' to really create some more dialogue among Black boys and be able to create spaces where they can feel comfortable in their own skin,” Jenkins said. “We had some conversation around what they took out of it, what are some things that resonated. And to hear these young men talk about the importance of mental health and talk about the psychological kind of effects that it has on them or how it makes them feel when they walk into a space and can tell that people are afraid of them without even knowing who they are, what they’re about.

“The biggest thing is we need to be able to encourage Black boys to see themselves as more than just athletes and entertainers, see themselves more than what they can do with their bodies but what can they do with their minds. What can they do with their creativity and showing them that it is OK to be emotional, it is OK to laugh, to cry, to feel just as much as human as anybody else, and to encourage them to boldly walk in that regardless of what the world or society might tell them.”

Jenkins spoke to students a day after the Saints defeated the Los Angeles Chargers 30-27 in overtime. In the third quarter of that game, Jenkins wasn’t on the field for a third-and-1 play that the Chargers converted. The three-time Pro Bowl safety had played 2,651 consecutive snaps, dating to Week 17 of the 2017 season when the Eagles rested their starters in preparation for the playoffs.

“You’d have to ask Dennis Allen about that,” Jenkins said, referring to the Saints defensive coordinator. “It was a package that I just wasn’t in. I take a lot of pride in being available and being on the field as much as possible, but it made me feel a lot better that we won the game.”

Jenkins’ ironman streak is even more impressive considering all the work he does off the field, from fighting for social justice and racial equality to building several businesses.