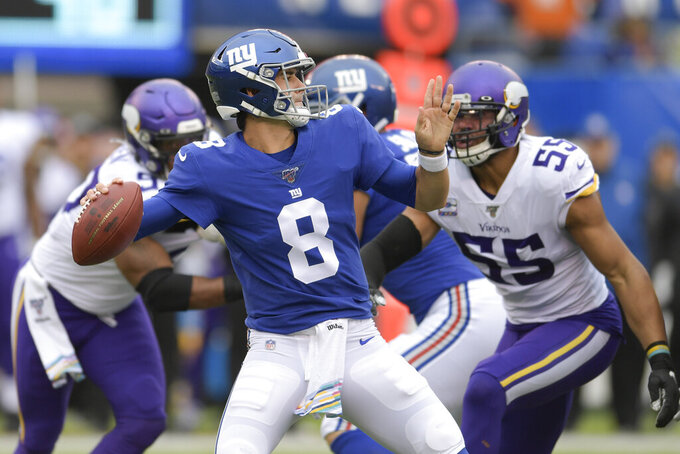 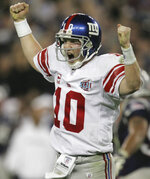 FOXBOROUGH, Mass. (AP) — Few quarterbacks have outdueled Tom Brady and the New England Patriots the way Eli Manning has during his career.

Twice Manning has been under center to help the Giants lead fourth-quarter comebacks in the Super Bowl over New England.

In 2007, Manning spoiled the Patriots' bid for an undefeated season by leading a game-winning drive in the final two minutes that included his pass to David Tyree and his now infamous helmet-pinning catch. It set up Manning's TD pass to Plaxico Burress to give the Giants a 17-14 victory.

But when the teams meet on Thursday night, Manning likely won't get the chance to add to his past heroics against the Patriots (5-0) .

After being benched following the Giants' 0-2 start this season, the quarterback who Belichick thinks will "absolutely" be in the discussion for the Pro Football Hall of Fame will again be in a backup role when rookie Daniel Jones makes his fourth straight start.

The Giants (2-3) have gone 2-1 with Jones as the starter, but the 22-year-old will be walking into a matchup with the NFL's top-ranked defense without three top playmakers. Running back Saquon Barkley will miss his third straight game because of a sprained right ankle. Tight end and leading receiver Evan Engram is dealing with a knee injury and receiver Sterling Shepard is in the concussion protocol.

Jones said he's ready to take on the challenge, regardless of who suits up for New York.

"We're confident in the guys we've got," he said. "I think when you look at how some of those guys have played and stepped up, I think we've got guys who are ready to go and ready to make plays. ... I know those guys will be ready."

Jones will also be up against some recently unfavorable history for young quarterbacks when they match up with the Patriots.

New England has won 18 straight games against a first or second-year quarterback, the longest streak in NFL history.

While the Patriots are preparing for Jones, safety Devin McCourty said they're also ready if Manning does make an appearance.

"Obviously, we know, if anything, they probably have one of the best backups in the NFL," McCourty said. "There's been a lot of legends that I've gotten the opportunity to play against, some to play with. Those guys, sometimes they retire or different things, younger guys come up, they start over them. So, those things always happen. But I think one thing we have to be ready for is, if he does get in the game, knowing that he'll be prepared and he'll be ready to go."

Some things to watch for during Thursday night's matchup:

There was so much talk about the Giants' three first-round draft picks — Jones, defensive tackle Dexter Lawrence and cornerback DeAndre Baker, it was easy to overlook the other draft picks. One who has stepped up in recent weeks is fifth-round choice Darius Slayton. The speedy wide receiver missed a lot of training with hamstring issues. He was inactive for the first two games of the season. In the past three, the Auburn product has been targeted 12 times by Jones. He has caught nine passes for 157 yards, a 17.4 yard average. He had the only TD last week, a diving 35-yard catch.

The biggest difference between the teams — besides talent — is turnovers. The Patriots lead the NFL at plus-7. They have intercepted 11 passes and recovered one fumble. The offense has thrown three interceptions — only two by Brady — and lost two fumbles. The Giants are close to the bottom, tied for 29th at minus-5. They have had five passes intercepted and lost six fumbles. The defense has five picks and recovered its first fumble Sunday.

PASS AT YOUR PERIL

The Patriots' defense is ranked No. 1 against the pass this season, allowing just 160 yards per game. It's also the only defense in the NFL yet to allow a passing touchdown.

One thing that may complicate both teams' ability to throw is the weather. The forecast calls for temperatures in the low 50s, with a 100 percent chance of rain. Winds are expected to be between 20 and 30 mph, with gusts possibly reaching more than 40 mph.