Manning not worried about having Jones waiting in the wings 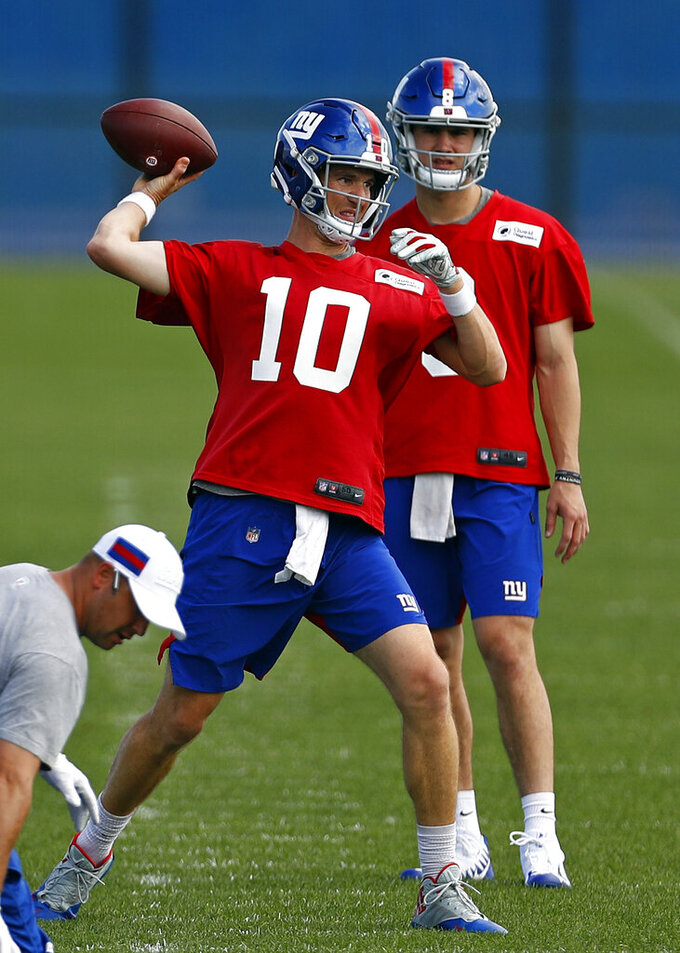 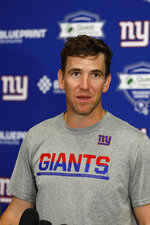 The 38-year-old Manning is always focused on what he can control and right now that's being the Giants' quarterback in 2019.

There seems to be no doubt the kid from Duke is going to replace him some day. The question is when it will happen.

On the opening day of organized team activities Monday, coach Pat Shurmur said Manning is his starting quarterback. The goal for Jones and fellow backups Alex Tanney and Kyle Lauletta is to be ready to play on opening day if something happens to the two-time Super Bowl MVP.

Manning, who has led the Giants to the playoffs just once since the 2011 season, refused to say Monday he wants to be the starter as long as possible.

"I understand that I am the quarterback on the Giants and it is my responsibility to go out there and do my job to the best of my ability," he said. "I want to be in this position and be the quarterback. I want to go win games and have a great year."

Manning, who has led the Giants to eight wins over the past two seasons, said he has not worked any harder in the offseason or he is more concerned because Jones is waiting behind him.

"I don't think this has changed that," he said. "I understand the circumstances that I am in and sure, I need to play well and play well early. Just do my job. You want to do that. You have to be careful not to press and do too much when things aren't there and force things. Just have to play to the best of my ability and make good decisions. Lead this team to wins."

Manning intends to take Jones under his wing. That's not a change though. He has done that for years with every quarterback who has joined the team, whether it was Ryan Nassib, Davis Webb, Geno Smith, Tanney, Lauletta or now Jones.

"Whoever is in the quarterback room, (we) talk football," Manning said. "If someone is confused about something or not sure about something, we have a great communication system and a relationship."

While Manning lost his biggest offensive threat in the trade that sent Odell Beckham Jr. to the Cleveland Browns, other upgrades have been made.

Right guard Kevin Zeitler was acquired in a second trade with the Browns and the Giants recently signed veteran Mike Remmers, who should take over at right tackle. Center Jon Halapio is back after breaking a leg early last season and left guard Will Hernandez should improve after a decent rookie season.

Left tackle Nate Solder had minor surgery to clean up his ankle, but he is expected to be ready for training camp.

That should improve the line, which gave up 47 sacks last season. And the offense as a whole should also benefit in its second season in Shurmur's system and having Offensive Rookie of the Year Saquon Barkley.

"Guys get lined up and are playing fast. They know what to do," Manning said. "They know plays, adjustments and different things. Just a few new spots here and there at receiver or offensive line. For the most part, a lot of the base guys are returning. They have that second year and will be able to play fast. It is just not thinking as much early on. It should help out on both sides of the ball."

Shurmur believes he has a good quarterback room.

"Eli is getting ready to play winning football and Daniel Jones is trying to learn the offense and get himself ready to play Week 1, like all the quarterbacks in the room," Shurmur said. "Because they have a general respect for each other and because that really is a healthy quarterback room, they can improve and get better. I think that is good."

NOTES: Rookie CB Corey Ballentine was at the OTA. The sixth-round draft pick was shot in the buttocks on the night he was drafted. His best friend was killed. "He is making progress," Shurmur said. "I think it is still going to be a little bit of time, but he is getting better." Ballentine did not speak to the media ... Remmers had back surgery and is getting ready to play. He said he felt fine. .. Lauletta has his knee cleaned up and is working his way back, too. ... The coach said some players missed the workout because their flights were delayed by weather.