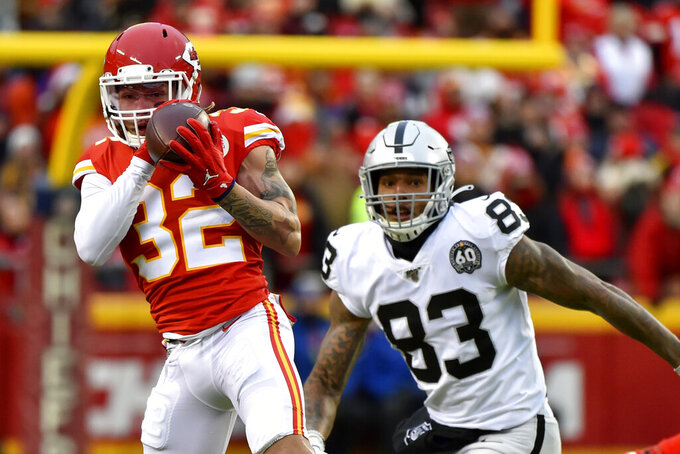 KANSAS CITY, Mo. (AP) — Tyrann Mathieu and Frank Clark were watching the AFC championship game on television a year ago, their teams knocked out of the playoffs, never thinking for a moment what the following 12 months might bring them.

But after the Chiefs watched their defense fold in overtime against the Patriots, costing them a chance to reach the Super Bowl for the first time in nearly five decades, coach Andy Reid embarked on a massive overhaul of the unit. He replaced longtime coordinator Bob Sutton with Steve Spagnuolo, jettisoned aging and unproductive players, then asked general manager Brett Veach to bring in some legitimate playmakers to better fit their new scheme.

That's how Mathieu and Clark wound up in Kansas City.

The Chiefs signed the ball-hawking safety to a $42 million, three-year deal to bring his talent and swagger to the back end of their defense. A month later, they traded a package of draft picks to the Seahawks for Clark, then signed him to a $105.5 million, five-year contract before the bruising pass rusher had even played a down for them.

Now, the pair not only reside in Kansas City, they're playing for an AFC championship there.

“A great opportunity to play in Kansas City and in front of the world,” Mathieu said Wednesday, before their first practice to prepare for Sunday's game against Tennessee. “To be on this stage is everything you work for, especially myself, being in my seventh year, going through what I've gone through in my career. To be in this position is a blessing.”

Mathieu is making more money per year than in any other season of his career, and Clark is now among the highest-paid defensive players in the league, yet they both seem like wise investments for a club with a lousy history of big contracts.

Eric Berry never lived up to the $78 million, six-year deal the safety signed in 2017, playing three games total over the next two seasons due to injuries. Justin Houston appeared in only 32 games over three seasons after signing a $101 million, six-year contract in 2015, at the time the second richest for a defensive player in NFL history. Wide receiver Dwayne Bowe had 117 catches but just five touchdowns in two seasons after his $56 million, five-year contract in 2013, and quarterback Matt Cassel went a mere 19-28 in four years as the starter after his $63 million, six-year deal in 2009.

No wonder the Chiefs are so happy with the production Mathieu and Clark have provided.

Yet their road to Kansas City — and all those riches — was fraught with obstacles.

Mathieu was a standout safety at LSU before a series of drug arrests torpedoed his college career. At one point, after an arrest in 2012, he told an Arizona television station that he contemplated suicide. And when Mathieu got his life in order, and the Cardinals had taken a chance on him, injuries threatened his professional career.

He turned that around, too. Mathieu helped the Texans reach the playoffs last season, then landed his contract in Kansas City, where he immediately became the go-to leader not only of the secondary but the entire Chiefs defense.

“That's who he is,” quarterback Patrick Mahomes said. “He doesn't have to be anything other than himself. He goes out there every single day and just by his attitude, his mindset, he's leading other guys. His play speaks for itself, but the way he's every single day able to be great, it spreads through the team.”

Clark has a remarkably similar story in finding his way to Kansas City.

He also was kicked off his college team, though Michigan did so following a domestic violence incident. And when Seattle gave him a chance, Clark avoided drama until an ugly social media incident involving a female TV reporter.

The Chiefs insist they did their due diligence before trading for him, though, and Clark has steered clear of trouble while helping Mathieu steer their revamped defense deep into the postseason. Clark had three sacks of Deshaun Watson in their comeback win over Houston last week, including one in which he whiffed twice and ran about 40 yards before he finally brought down the Texans quarterback from behind.

“He's relentless. That one sack kind of tells you the whole story,” Chiefs coach Andy Reid said. “He was running around chasing him, missed him twice, got back up and sacked him. That's how he is wired.”

That's how Mathieu and Clark are both wired. It's a big reason they have bucked the NFL trend — so far — by living up to their massive contracts, and in doing so, helping the Chiefs return to the AFC championship game.

This time, they won't be watching it on TV.

“It's awesome,” Clark said, “but our goal isn't just to make it there, it's to win it all. It's one game at a time. But it would feel good to go ahead and bring home that trophy, the AFC championship trophy — that would mean the world to us.”

NOTES: Pro Bowl DT Chris Jones (calf) did not practice Wednesday, though Reid said he was improving. Jones missed last week's game against Houston and is likely to be questionable Sunday. “He's a tough kid," Reid said. "It's not a pain thing. It's however he can play to the best of his ability. That's what we're looking at.” ... RB LeSean McCoy and QB Matt Moore also did not practice Wednesday because of illnesses.