Maye sorry for DUI arrest, wants to remain with Jets 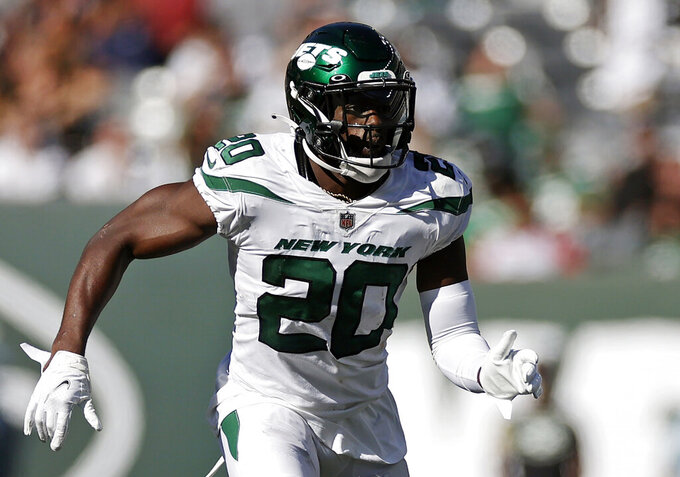 FILE - In this Sept. 19, 2021, file photo, New York Jets free safety Marcus Maye plays in the team's NFL football game against the New England Patriots in East Rutherford, N.J. The star safety, a team captain last season and its longest-tenured player, declined to explain why he opted to not tell the Jets until after the news of his DUI arrest in February was reported in October. Maye acknowledged coach Robert Saleh seemed blindsided by it when Maye told him. (AP Photo/Adam Hunger, File)

FLORHAM PARK, N.J. (AP) — Marcus Maye knew where to go once the news of his DUI arrest from February became public.

He went straight to the coach's office, seeking out Robert Saleh to explain what happened and why he kept it from the New York Jets for more than seven months.

“It’s just an adult thing to do,” Maye said Thursday while speaking to reporters for the first time since his arrest was reported on Oct. 4. “Just own up (to) my situation, tell him about it and talk about it and we handled it and we kept going.”

Broward County court records show the 28-year-old Maye was charged with three misdemeanors — driving under the influence, DUI/damage to property, and leaving the scene of an accident — after a car crash on Feb. 22 in Fort Lauderdale, Florida. He's also facing a civil lawsuit “in excess” of $30,000 filed by the driver of the car he hit, according to court documents.

Maye said he wasn't allowed to comment on his legal situation, but was remorseful.

“Oh, yeah, definitely,” he said. “I mean, the situation happened, I definitely feel sorry for it. You know, I learned from it, owned everything. Just got to keep going.”

The star safety, a team captain last season and its longest-tenured player, declined to explain why he opted to not tell the Jets until after the news of his arrest was reported. Maye acknowledged Saleh seemed blindsided by it when he told him.

Maye’s arrest could subject him to the NFL’s personal conduct policy and result in the safety being suspended. The league is reviewing the matter under its policies, and Maye could also be subject to discipline since he didn’t inform the Jets when it happened.

“I mean, we’ll cross that line when we get there,” Maye said. “But until then, I’m just going to keep playing football as best as I can.”

Saleh previously said he and the team support Maye while he deals with his legal issues. A Zoom hearing is scheduled for next Wednesday in the case.

Maye doesn't believe he needs to earn back the trust of his coaches, teammates and the organization.

“They know me,” he said. “When I come into this building, I’m all go. I don’t think there’s any trust issue from my end and stuff like that. They know I’m 100% with those guys every time step on the field or walk into this building.”

Maye has been sidelined the past two games with a low ankle sprain. He appears on track to play Sunday at New England after being a full participant at practice Thursday following a limited session Wednesday.

“It’s big,” defensive coordinator Jeff Ulbrich said of Maye's impending return. “Marcus is definitely one of the better guys we have on the back end. He not only has the talent, he has the speed, he has the athleticism, he has all of that. But he heightens everybody just with his awareness and his communication skills.”

Despite missing two games, Maye is fifth on the team with 23 tackles to go with a sack, a quarterback hit and a pass defensed.

He has been one of the Jets' top players since he was drafted in the second round out of Florida in 2017. Maye was looking for a long-term contract extension in the offseason, but the Jets placed the franchise tag on him and the sides were unable to reach an agreement on a deal.

He’s playing this season on the tag amount of $10.6 million, and his name has been frequently mentioned in rumors ahead of the NFL's Nov 2 trade deadline.

“I don’t think about it,” Maye insisted. “I have no control over it, so the only thing I can control is me going out there and playing.”

But fueling speculation that he could be dealt was his agent, Erik Burkhardt tweeting after Maye's ankle injury that the safety "should be back fully healthy just before the trade deadline” and added a handshake emoji.

“I don't have any control over his phone,” Maye said, adding that “I'm healthy now.”

He laughed when he was asked if he was seeking a trade the way his buddy Jamal Adams did last year. Maye has not spoken to the Jets about wanting to be traded. He also made it clear to both Saleh and general manager Joe Douglas he wants to remain in New York, something he also said during training camp.

NOTES: LB C.J. Mosley (hamstring) and TE Tyler Kroft (back) didn't practice for the second straight day, leaving them uncertain to play Sunday. Both worked with trainers on a side field during practice. ... P Braden Mann, who has missed four games with a sprained left knee, appears to be getting closer to a return. He ran sprints during practice and is no longer wearing a brace on his leg.