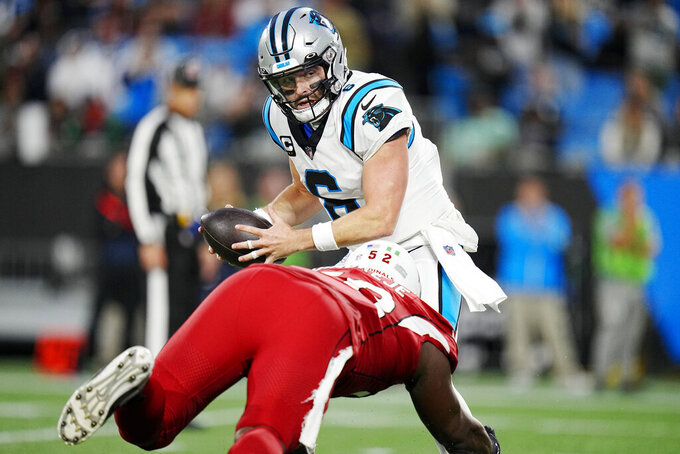 CHARLOTTE, N.C. (AP) — No NFL quarterback has struggled quite as much this season as Carolina’s Baker Mayfield.

The bumpy road isn’t expected to get any smoother on Sunday for the 2018 No. 1 overall draft pick.

Mayfield, who is last in the NFL in ESPN’s total quarterback rating, leads the league’s worst offense against its top-ranked defense when the Panthers (1-3) host the San Francisco 49ers (2-2).

Mayfield joined the Panthers in July after a trade with the Cleveland Browns. He has struggled mightily, completing a league-low 54.7% of his passes while being limited to 186.7 yards passing per game with four touchdowns and three interceptions.

“I pride myself on being a guy that elevates the guys around him and being able to lead at an extremely high level,” Mayfield said. “And obviously, that has not happened yet."

Panthers offensive coordinator Ben McAdoo said he deserves blame too, adding that he needs to put his players in better position to make plays and find ways to get Christian McCaffrey and D.J. Moore the ball more often.

That's easier said than done against the 49ers.

San Francisco has been dominant defensively with Nick Bosa’s NFL-best six sacks leading a fearsome pass rush and playmaking safety Talanoa Hufanga anchoring the back end. The Niners have given up only 37 points to opposing offenses — tied for the second fewest through four games since 2010 — and have allowed 3.81 yards per play, the lowest mark through four games since 2008.

Panthers coach Matt Rhule said “I think they're number one in every category.”

“I think it’s to be best in the league,” Bosa said about the expectations of San Francisco's defense. “It’s kind of our mindset every year and this year we have the personnel to do it. Not that we haven’t in the past, but at all three levels are elite players.”

When the Panthers were considering making a move at quarterback this past offseason, they pursued trades for Deshaun Watson, Jimmy Garoppolo and Mayfield.

Watson wound up in Cleveland and talks with the 49ers about Garoppolo never really got off the ground because of the money involved in taking him on.

“Jimmy, he’s won a lot of games there and got them to the NFC championship last year,” Panthers defensive coordinator Phil Snow said. “He just wins games.”

The 6-foot-1 Mayfield continues to struggle with batted balls at the line of scrimmage. He's had an NFL-high 11 this season, including five last week by Arizona — one of which was intercepted and led to a Cardinals touchdown.

“It's a copycat league,” McAdoo said. “So what you are seeing is teams are rushing and then once they feel that they are blocked or stymied (on the pass rush), they will put their hands up and jump.”

KITTLE ON THE MEND

Niners tight end George Kittle had a monster three-game stretch in late in the 2021 season, but in the eight games since he's been mediocre at best with just 21 catches for 220 yards.

“The more Kittle is out there and healthy, the more he practices, the more he can get back in the routine,” 49ers coach Kyle Shanahan said. “I think that stuff will take care of itself. The plays that went to him, I thought he did a good job on in the game. Kittle affects the game in so many ways, the run and the pass.”

Shanahan said the 49ers want to get the ball to Kittle more, but added, “it’s something we’re not that concerned about. We think it’ll take care of itself as we get going.”

TAKING IT ON THE CHINN

The Panthers will be without safety Jeremy Chinn, who had back-to-back 100-tackle seasons to start his career but was lost in Week 4 to a hamstring injury. The Panthers will turn to Myles Hartsfield and Sean Chandler to fill Chinn’s spot while he's on short-term injured reserve.

The versatile and athletic Chinn almost surely would have been matched up at times against dangerous 49ers wide receiver Deebo Samuel.

The 49ers will stay on the road following the game as they begin their now-annual 10-day stay back East. The Niners will head to West Virginia to practice there before playing at Atlanta in Week 6. San Francisco has done this kind of trip the previous three seasons, including twice in 2019. The Niners are 7-1 in those games.

“There is something when you go on the road, just the distractions are a little less there,” Shanahan said. “The people aren’t there, even in your own house, you’re just kind of locked into a room and I think it just helps guys focus a little bit more. I don’t know if it’s a coincidence, but the numbers have definitely been a lot better.”