McCaffrey trade not nearly enough to lift 49ers past Chiefs 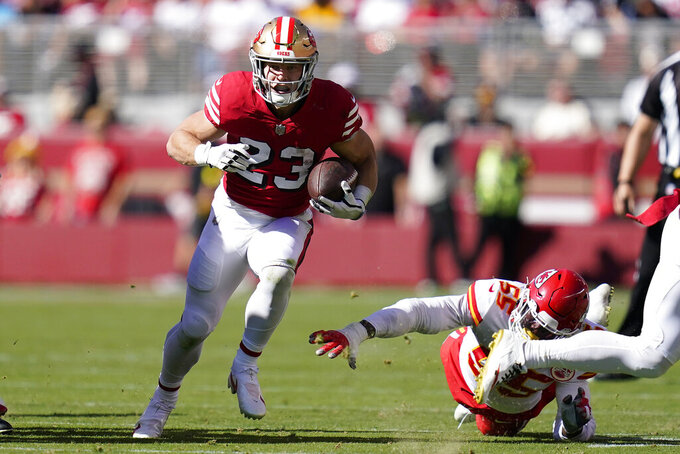 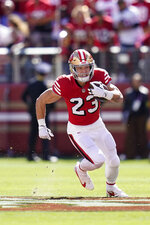 That proved to be prophetic on Sunday.

McCaffrey showed flashes in his debut for the Niners two days after joining the team but a shoddy defense and costly mistakes on offense and special teams sent San Francisco spiraling in a 44-23 loss to the Kansas City Chiefs on Sunday.

“Adding McCaffrey was was a big pickup for us, but at the end of the day it’s the truest team sport that there is,” linebacker Fred Warner said. “It doesn’t matter how many how much talent you got throughout a roster. I hate even talking about talent because at the end of the day, it all comes down to execution, playing with high effort, high physicality and just doing your job.”

Almost none of the 49ers (3-4) did that against Kansas City so it didn't matter what McCaffrey did in his limited action.

The star running back had a package of about 20 plays he had learned since arriving on Friday following the trade from Carolina.

He showed a couple of flashes, rushing for 38 yards on eight carries and catching two passes for 24 yards.

“This was a weird week for me and for them,” McCaffrey said. “I didn’t kind of know what to expect. I had a certain list of plays that were up and for me, mentally, this was just focus on everything I can and control what I can control and get rolling. Obviously, losing’s frustrating but I’m still getting to know these guys. But I’ve got to do my job. I’ve got to make a few more plays.”

It might not have mattered what McCaffrey did the way the rest of the 49ers played. Jimmy Garoppolo threw an interception at the goal line, the kick coverage allowed a long return to start the second half and the usually reliable San Francisco defense was picked apart all day.

“Regardless of the players we’ve added, we have good players I believe, and I believe we added another one. But we got to play better and take advantage of that.”

The biggest issues came on the defensive side of the ball. After getting an interception of Patrick Mahomes on the opening drive, the Niners allowed Patrick Mahomes and the Chiefs to score touchdowns on six of their next seven possessions with the only empty trip coming on a missed field goal at the end of the first half.

The Niners allowed a 34-yard screen pass to Jerick McKinnon on third-and-20 to set up one touchdown, a 57-yard pass to Marquez Valdes-Scantling on third-and-11 to set up another TD and a 45-yard touchdown pass on third-and-6 to JuJu Smith-Schuster.

The Chiefs averaged 10.17 yards per play and had eight gains of at least 20 yards on eight drives with Mahomes in the game.

“We definitely had our chances,” defensive end Nick Bosa said. “It’s a great team and and we gave them too many easy ones.”