McCown with Texans 19 seasons after hoping to join team 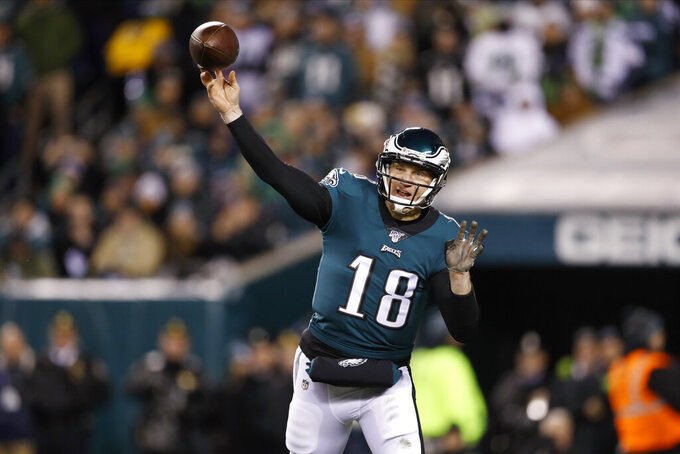 FILE - In this Jan. 5, 2020, file photo, Philadelphia Eagles' Josh McCown plays during the first half of an NFL wild-card playoff football game against the Seattle Seahawks, Sunday,, in Philadelphia. In 2002 the Houston Texans were an expansion team preparing for their first season and McCown had just wrapped up his college career at nearby Sam Houston State. Nineteen seasons and nine teams later the quarterback finally got his wish when he signed with the Texans this month to be their third quarterback behind Deshaun Watson and AJ McCarron. (AP Photo/Julio Cortez, File)

HOUSTON (AP) — In 2002, the Houston Texans were an expansion team preparing for their first season and Josh McCown had just wrapped up his college career at nearby Sam Houston State.

Back then the Texas native longed to play for the new franchise, but he was drafted by Arizona instead.

Nineteen seasons and nine teams later, the quarterback finally got his wish when he signed with the Texans this month to be their third quarterback behind Deshaun Watson and AJ McCarron.

“Going back to pre-draft and everything that went on (in 2002) ... I followed it closely because it was another team in Texas,” McCown said. “The desire to come here was strong. Things just work out funny, but to be here 19, almost 20 years later is crazy.”

McCown joins the Texans after spending the early part of the season on the Eagles practice squad, a job that allowed him to stay at his home in Texas because of the pandemic instead of reporting to Philadelphia.

He last appeared in a game in January when he took over for an injured Carson Wentz in Philadelphia’s 17-9 playoff loss to Seattle.

Interim coach Romeo Crennel liked the idea of adding someone with McCown's resume to his roster in a season where the pandemic has the potential to knock players out at any time.

“If we lose a quarterback to the virus, now then we have a proven, experienced guy in the on-deck circle or in the bullpen so that we can pull from that guy," Crennel said. “He has a tremendous amount of experience. He’s seen a lot, done a lot."

Since McCown has been in the NFL since the Texans became a team, it’s no surprise that at 41 he’s by far the oldest player on the team. He’s seven years older than Houston’s second-oldest players, long snapper Jon Weeks and tight end Darren Fells.

His advanced age has had some players poking fun at him since he joined the team.

“He’s been around for a long time, he’s prehistoric essentially,” linebacker Whitney Mercilus said. “It’s awesome to have him in the building, also to bring his wealth of knowledge to the quarterback room.”

McCown doesn’t remember anyone referring to him as prehistoric before, but doesn’t mind the good-natured ribbing from his teammates.

“It comes with the territory,” he said. “When you have the good fortune of playing this long, I guess it’s a blessing to be made fun of for that reason. Maybe if it was a little less stops along the way, it would be a little bit better story.”

McCown spent last season with the Eagles after playing the previous two seasons for the Jets. He spent four seasons with the Cardinals after they drafted him in the third round and has also played for the Lions, Raiders, Panthers, Bears, Buccaneers and Browns.

While he still has the desire to play, McCown said a bonus of joining the Texans is the chance to work with Watson and share his knowledge of the game with the 25-year-old.

“Any way I can serve and help a young quarterback like Deshaun continue to do what he’s doing, that’s the icing on the cake,” he said. “That’s what I want to get out of this. Just to be a part of an organization, be a part of something, a group of guys coming together to accomplish something.”

And although he’s been in the NFL since most of his teammates were in elementary school, he still believes he could play effectively if called upon. His duties as a father have helped keep him in shape as he’s aged.

“I still feel like I’m throwing it the same way,” he said. “My two sons are 10th and 11th grade high school quarterbacks, so there’s really not a time throughout the calendar year that we’re not throwing the football. That’s served me because it keeps me around and keeps the arm loose.”

When McCown was growing up he figured he’d end up coaching high school football in his home state if he didn’t make it to the NFL. After he was drafted, he put the old dream of coaching on the backburner. But now that his playing career is winding down, he’s started thinking about the possibility of coaching in the NFL.

“The longer I’ve been in this game and been around these guys, I see real value in being able to be a part of an organization and compete at the highest level,” he said. “So... whenever I finally take the cleats off, I definitely see that in the future.”