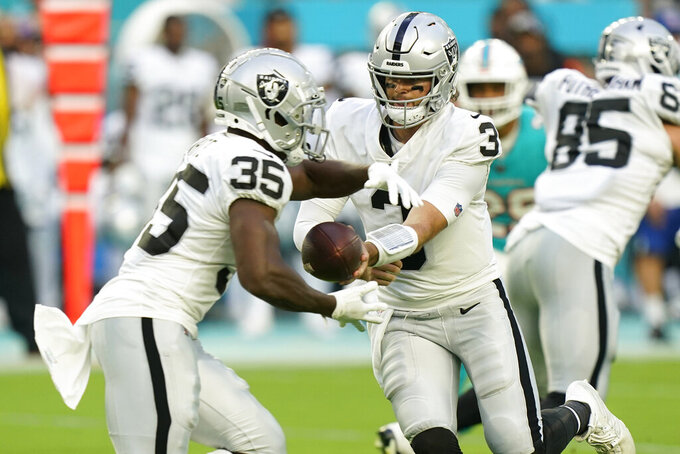 The Patriots practiced at Las Vegas’ facility Monday ahead of a pair of joint practices Tuesday and Wednesday.

“This is magnificent,” Belichick said. “I’ve been to a lot of good facilities and there have been some amazing college facilities, but I’d put this up there against any of them. I mean forget about the amenities, just the fields, the weight room, the offices, the indoor facility, the proximity, the ease of everything; yeah, this is as good as any I’ve seen — better than any I’ve seen.”

The teams will meet in Friday’s preseason finale.

It marks the second straight week of joint practices for the Patriots, who spent last week battling against Carolina. Tempers flared on separate days before New England’s 20-10 preseason win on Friday.

With multiple former Patriots players and coaches following McDaniels to Las Vegas, tensions could be high for New England once again.

“It’s grown men out there, it’s hot, everybody is getting yelled at, there’s going to be a couple fights — that’s football,” Raiders wide receiver Tyron Johnson. “I don’t expect nothing less, but we’re going to try to keep it clean. But it’s football, I can’t make any promises.”

McDaniels said he’s been a part of joint practices before, and he’s found them as a useful tool for coaches and players to evaluate against another system in a controlled environment.

Different faces, sure. But the Raiders might see some of the same things they’ve learned since training camp began last month, considering where McDaniels honed his skills as an offensive coach.

Under McDaniels, the Raiders are 3-0 in the preseason after beating Jacksonville in the Hall of Fame game, followed by wins over Minnesota and Miami in the first two weeks of the exhibition schedule.

Nevertheless, with an offensive line that has used numerous rotations this preseason while trying to find a starting five that can protect quarterback Derek Carr, and a defensive front that still needs work against the run, seeing something different at practice could prove invaluable for a team trying to win the AFC West, one of the best divisions in the NFL.

“I’m very excited for it, I think it’s going be fun,” said offensive lineman Jermaine Eluemunor, who spent two seasons with the Patriots from 2019-20.

Belichick said he’ll use this week to tighten some things up while moving forward toward installing certain things, and hopefully getting a few guys back that missed last week.

Belichick also said having joint practices away from home can prove to be beneficial, especially leading into the final preseason game, as it allows players to bond.

“It prepares us for the games we’re going to have on the road this year,” Belichick said. “So, whether it’s the whole travel routine, the operations and support staff, just getting things that you need on the road, whether that’s food, treatment, whatever. So, just trying to pass the time constructively.”