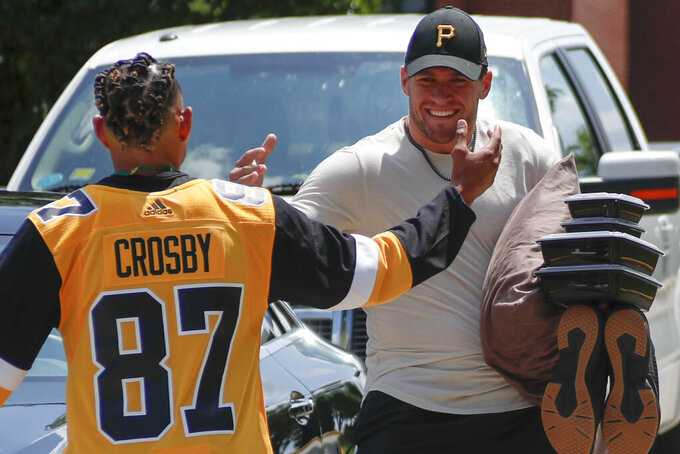 LATROBE, Pa. (AP) — No helicopter swooping in for a wind-swept landing. No Rolls Royce wrapped in black-and-gold complete with a chauffeur in full uniform.

No firetrucks or random all-terrain vehicles either.

The 2019 version of the Pittsburgh Steelers reported to training camp at Saint Vincent College on Thursday by significantly toning down the kitschy theatrics that had become a staple in recent years thanks to the tricked-out rides of former stars Antonio Brown, James Harrison and Brett Keisel.

OK, so maybe cornerback Joe Haden did pull up to Rooney Hall in a white Rolls Royce. And sure, wide receiver Eli Rogers rode shotgun on a tractor trailer before hopping out while wearing overalls with a green reflective shirt underneath and work boots on his feet while carrying a barbell.

But that was about as weird as it got. And that's kind of the point.

Following a December swoon that dropped them out of playoff contention and a bumpy offseason in which Brown pouted his way into a trade to Oakland and two years of drama surrounding running back Le'Veon Bell's status ended with Bell signing with the New York Jets , the Steelers know a hard reset is in order.

Pittsburgh spent the opening hours of camp continuing a series of pragmatic decisions made over the past few months focusing solely on how to get back to the postseason minus Bell and Brown and with a handful of new faces on defense.

Coach Mike Tomlin agreed to a one-year extension that runs through 2021, a deal that should — at least temporarily — to put to rest any speculation on his long-term job status. Cornerback Mike Hilton signed his exclusive rights tender rather than risk a holdout. Haden is "optimistic" agent Drew Rosenhaus can iron out a new deal with Pittsburgh before the regular season begins.

It all felt, well, kind of normal.

"I just like that everyone's happy," center Maurkice Pouncey said. "Everyone's at a happy place. Even if they're not here they're all happy, so all of the stuff has gone away now. The feelings are gone and everyone can just be happy and move on."

Or, at least in Tomlin's case, making sure they stay in place.

The Steelers have long made a habit of extending the contracts of prominent franchise figures — be it the general manager, head coach or franchise quarterback — with two years left on their deals. Tomlin still has two seasons left on the extension he signed in 2017. Extending him through 2021 — Tomlin said the deal does include an option for 2022 — assures it coincides with the end of the deal quarterback Ben Roethlisberger signed in the spring.

It also, in a way, underscores a sense of urgency in an organization that hasn't reached the Super Bowl in nearly a decade despite having one of the most dynamic offenses in the league.

Tomlin is 125-66-1 with two Super Bowl appearances and one championship in 12 seasons. Yet the Steelers have won just three playoff games since their most recent AFC title in 2010 and Brown's ugly departure led to plenty of back-and-forth — particularly on social media — on the culture in the locker room and who deserved blame for the team's highly public divorce with Brown.

It grew so caustic at one point that veterans such as Pouncey and Ramon Foster urged their teammates to put their phones away.

"Nobody cares about the cleanup," Foster said. "They only care about what's initially said. That's usually the bad stuff in the beginning. At a certain point you got tired of hearing it because you know it wasn't true or 'This guy wasn't as bad as they made him to be,' or 'This team, this locker room, these coaches aren't what you're making them out to be.' All those guys got their turn at saying what they wanted to. And with that, it just came to a head and we were like come on guys you've been here."

The messaging must have worked. The talk as players carried luggage, fans, speakers and electronics into cramped dorm rooms for the next three weeks centered more on substance and less on style.

The Steelers understand expectations are lower with Brown and Bell gone. They know the retooled Cleveland Browns have the swagger and the Baltimore Ravens have the bragging rights as reigning AFC North champions. It hasn't been that way in a division they've largely dominated for a long time.

Maybe that's not a bad thing.

"Not a lot of people are saying that we're going to be good," Pouncey said. "I always like being the underdog. Ever since I've been playing football I've always been the underdog so maybe that's the best way to be."

NOTE: The team placed outside linebacker T.J. Watt on the physically unable to perform list after Watt experienced tightness in his hamstrings during the mandatory run test late Thursday afternoon.