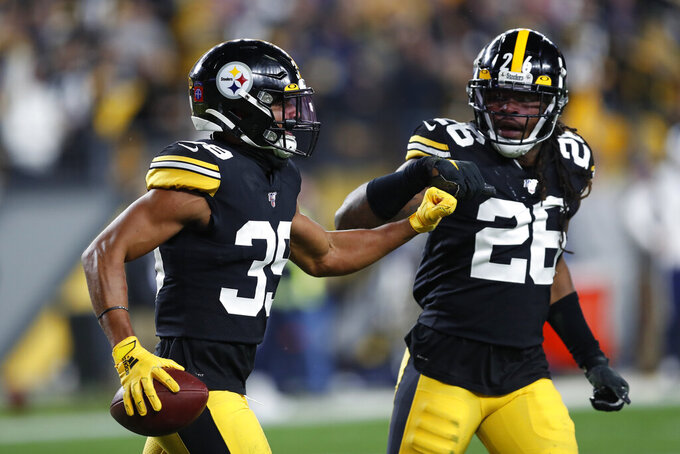 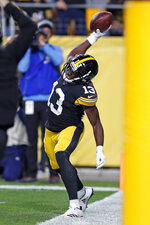 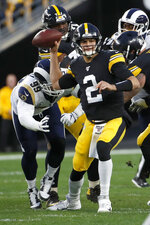 PITTSBURGH (AP) — The ball left Jared Goff's hands and fluttered to the ground. And for a split second, everyone around Minkah Fitzpatrick eased up . Not Fitzpatrick. Easing up isn't really his thing.

Instinctively, the Pittsburgh Steelers safety at the epicenter of his team's remarkable turnaround reached down, picked it up and took off. Four seconds and 43 yards later, he was in the end zone. The Steelers were in the lead. And Fitzpatrick's growing legend added another remarkable chapter.

Asked why he reacted so quickly while those around him temporarily froze — hard to blame them, considering by all accounts it appeared to be a forward pass — Fitzpatrick pointed to the coaching staff at Alabama. Whenever there was a loose ball in practice, Crimson Tide defensive players were instructed to pounce on it and start running regardless of the circumstances.

"Coaches yell 'Scoop' after every single play," Fitzpatrick said after his second touchdown in as many weeks helped the Steelers put together an inelegant 17-12 victory that pushed their winning streak to four. "'Scoop, Scoop, Scoop.' If you don't scoop, they'll throw the ball back out there, you have to go scoop it up again."

No need to tell Fitzpatrick twice.

All the 23-year-old has done in the seven games since his arrival in a trade with Miami — a move in which the typically risk-averse Steelers did something decidedly un-Steelerlike by sending a 2020 first-round pick to the Dolphins — is pick off five passes, recover a fumble, score twice and develop a reputation as a player who never seems to be out of position. Ever.

One that's become the fulcrum around which one of the NFL's most opportunistic defense swings. The Steelers (5-4) have already produced 26 turnovers through nine games, 11 more than they managed all of last season. Grabbing linebacker Devin Bush in the first round of the draft helped. So did signing cornerback Steven Nelson to the richest free-agent deal in team history.

Yet Fitzpatrick's impact is unmistakable. His five picks lead the team. His eight passes defensed are one behind cornerback Joe Haden though he's played in two fewer games. His dash to the end zone — complete with an escort by defensive end Cameron Heyward — made him the first Steelers defensive player in 35 years to score in back-to-back weeks.

"Every game Minkah is making big plays on the back end," Dupree said. "It makes us as rushers and defensive linemen up front, makes it that much easier for us to play."

It certainly looks that way. Pittsburgh heads to Cleveland (3-6) on Thursday holding the second wild-card spot in the AFC, heady territory considering it lost quarterback Ben Roethlisberger in mid-September and the Steelers were 1-4 a month ago following an overtime loss to Baltimore. Somehow, they've survived. The defense that's been long on potential but short on production in recent years is playing with a swagger that's contagious.

"I think we're slowly becoming that scary defense that nobody wants to play," Dupree said.

Offensive coordinator Randy Fichtner walked into the locker room on Sunday evening, pointed to quarterback Mason Rudolph and told the first-year starter "that's a step, that's a big step" after Rudolph completed 22 of 38 passes for 242 yards and a touchdown with no interceptions. Rudolph is just the ninth player since the 1970 merger to throw a touchdown in each of his first seven career appearances, a list that includes Roethlisberger. Challenged by Fichtner to start throwing the ball into tighter windows, Rudolph responded by threading the needle on several occasions and trusting his receivers to go make plays. About that ...

Confidently throwing into traffic is one thing. Catching the ball is quite another. Rudolph's numbers on Sunday would have been considerably better if not for a handful of drops. No one was immune. JuJu Smith-Schuster, James Washington, tight end Vance McDonald and running back Jaylen Samuels all let balls smack off their hands and fall to the turf. That needs to change quickly unless Fitzpatrick somehow manages to start scoring week in and week out.

"If you spend a lot of time with your receivers talking about receiving, you've got problems," coach Mike Tomlin said.

Mark Barron was a fixture on the field against the Rams, playing his most complete game since arriving in free agency in March. Barron finished with 10 tackles and a pass defensed against his former team.

The punt return game remains a mess. Ryan Switzer fielded a punt at the 5 in the fourth quarter and went nowhere, setting up a Los Angeles safety. Rookie Diontae Johnson had a season-best 14-yard return, but also fumbled.

Running back James Conner has a chance to return against Cleveland after missing two games with a shoulder injury. Starting guard Ramon Foster could also be back after recovering from a concussion.

Blunting Cleveland's momentum after the Browns snapped a four-game losing streak on Sunday against Buffalo. Having the offense generate more than one touchdown — which it has done in each of the past two games — would help.