Minshew, Jaguars close out season with 38-20 win over Colts 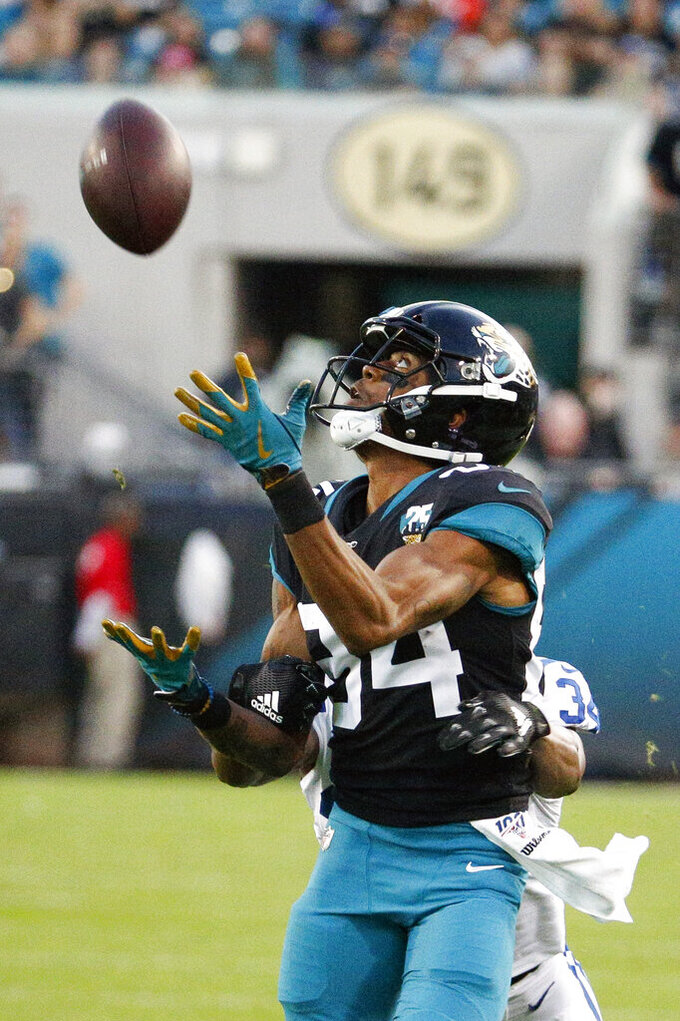 JACKSONVILLE, Fla. (AP) — This much is certain for the Jacksonville Jaguars: Minshew Mania will continue into 2020.

Coach Doug Marrone might even be around for it.

Gardner Minshew turned in his best performance in two months, throwing for 295 yards and three touchdowns in a 38-20 victory over Indianapolis on Sunday.

The rookie closed out Jacksonville's disappointing year by strengthening his case to be the team's starting quarterback over Nick Foles next season. Marrone seemingly helped his own cause, too.

Marrone's status has been unclear since team owner Shad Khan fired top executive Tom Coughlin last week. Khan will meet with Marrone, general manager Dave Caldwell and others in the coming days before deciding anyone's fate. Marrone and Caldwell have two years remaining on their contracts.

“Am I disappointed? Obviously. Am I concerned? Yes. You're always concerned when you have a disappointing season," Marrone said. "But for this moment, when I leave here, I might have a little bit more than one beer."

Minshew and the Jaguars (6-10) certainly made Marrone look good in the regular-season finale for both teams. Minshew connected with Keelan Cole, Ryquell Armstead and Dede Westbrook for touchdowns.

The sixth-round draft pick was at his best on consecutive passes to Cole, a 45-yard precision floater down the sideline and then a 14-yard strike while on the run for a score.

He looked like a rookie at times as well, with a fumble, an interception and two point-blank misfires in the red zone. Still, he helped Jacksonville win at home for the first time in two months.

“At least from now until whenever we start the offseason ... the guys in that locker room can feel good about something,” Marrone said.

The Colts (7-9) had a chance to finish .500 or better for the seventh time in the past eight years. But they did little on offense in the second half and finished below .500 for the second time in three seasons.

Jacoby Brissett fumbled on consecutive drives in the fourth, ending any chance Indianapolis had to end the year with consecutive victories. Yannick Ngakoue caused the first one that Calais Campbell returned for a touchdown and a 31-20 lead.

“It changed the game,” Brissett said. “I can’t be making those types of mistakes.”

Campbell chucked the ball into the stands, and Ngakoue yelled “pay me my money, man.” Ngakoue is a pending free agent and likely to get a franchise tag in the offseason.

“I've seen a lot and learned a lot being here in this organization," he said. "I'm forever thankful for them giving me an opportunity. At the end of the day, I don't know what the future holds. Business is business.”

Brissett turned it over again on the next drive. The late turnovers allowed Jacksonville to top 30 points for the first time in 15 months, since Week 2 in 2018.

Campbell stumped for Marrone after the win.

“We've got a lot of respect for him,” Campbell said. “We didn’t play as good as we wanted to, but I think we can win a Super Bowl with him as the coach.”

Running back Marlon Mack and receiver T.Y. Hilton were bright spots for Indy. Mack ran for 77 yards and two touchdowns in the first half. Hilton, who missed six games this season, had three receptions for 72 yards.

Jaguars running back Leonard Fournette has yet to play a full NFL season.

Fournette was inactive because of the flu, the first game he's missed this season. It's the third consecutive year that the fourth overall pick in the 2017 draft has missed at least one game. Fournette also sat out five games during his final collegiate season at LSU.

Fournette finished with 1,152 yards rushing and three touchdowns in 2019. He also led the team with 76 receptions.

Fournette and receiver DJ Chark became Jacksonville's first teammates to reach 1,000 yards in the same season since running back Fred Taylor and receiver Jimmy Smith in 2004. It should be a routine occurrence, but the fact that it hasn't happened in 15 years shows how few playmakers the Jaguars have had in recent years.

Josh Lambo broke Jacksonville's franchise record for field goals in a season with a 53-yarder in the second quarter. Lambo's second of the game and 32nd of the year topped the previous mark set by Mike Hollis in 1997 and tied two years later. Lambo added a 56-yarder at the end of the first half.

Colts: Have to get more playmakers for Brissett, who went 2-6 down the stretch.

Jaguars: Need to decide on Marrone and Caldwell, and then begin rebuilding a depleted roster. It should help that Jacksonville has two first-round draft picks in each of the next two seasons.