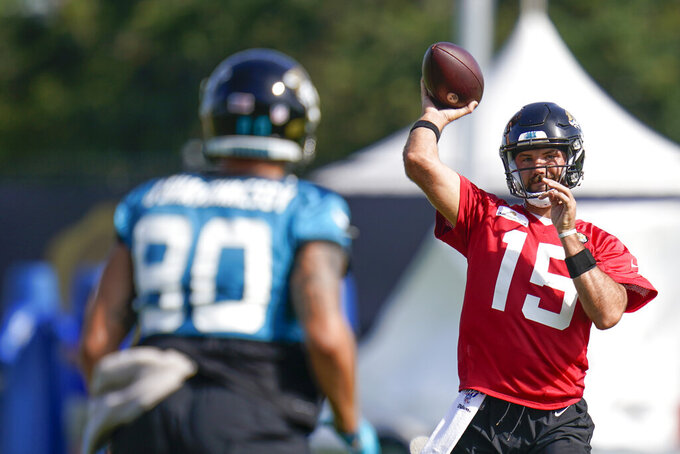 The Jacksonville Jaguars quarterback, a two-year starter who’s likely headed for a backup role behind No. 1 overall pick Trevor Lawrence, dropped a reference to Spanish conquistador Hernán Cortés when asked about his chances of earning the job Friday.

“Anytime you go into anything thinking that losing or second best is an option, most of the time that’s what you’re going to get,” Minshew said. “That’s like when Cortés landed in Veracruz with 600 dudes trying to take the Aztec empire. You know what he said? He said, ‘Burn the boats.’ He said, ‘We’re going back on their boats.’

“That’s kind of a mindset that stuck with me pretty much since I heard that story.”

It was the kind of vague reference that surely would have made Minshew’s former college coach, Mike Leach, proud. Leach’s passion for pirates and historical figures is well documented.

Minshew, meanwhile, hadn’t spoken publicly in Jacksonville since late December. That's when he laughed off then-coach Doug Marrone’s decision to create an open QB competition in Week 16 of the regular season. Marrone ended up choosing Mike Glennon over Minshew.

Many thought that would be the end of Minshew’s tenure in Jacksonville, especially with Lawrence on the way. New coach Urban Meyer looked like he was moving on from Minshew, too, when he signed C.J. Beathard to a two-year contract worth $5 million in free agency.

But two weeks into training camp, Minshew is still getting repetitions with the first-team offense. He and Lawrence are alternating days with the starters.

“All I ask for is a chance, and they’ve said they’d give me that and they have with the reps that I’ve been given,” Minshew said. “That’s all I can ask for. At that point, it’s up to me.”

Meyer has repeatedly praised Minshew’s work ethic, knowledge of the offense and how he has handled what could have been an awkward situation.

“I do appreciate what he’s going through,” Meyer said. “I’ve seen that at the college level. … It’s never been harder than 2021 to put team ahead of self. In my 35 years in the game, I’m not trying to be that old guy, but remember when the team was more important than self?

“I don’t know how much of that still is left, which you can complain about it, but it’s reality. He’s done a really good job.”

Minshew started 12 games in 2019, putting up better overall numbers than fellow rookies Kyler Murray and Daniel Jones and creating a “Minshew Mania” buzz around the city and part of the country. He was good enough that Marrone and former general manager Dave Caldwell gave him a chance to prove he could end Jacksonville’s decades-long search for a franchise quarterback.

Marrone turned to rookie Jake Luton at the bye week, partly because of Minshew’s struggles to get the ball down the field and partly because of a sprained thumb on his throwing hand. Luton made three starts before ending up back on the bench after a four-turnover performance against Pittsburgh. Glennon replaced him and started three games, a run that ended following his fourth turnover in six quarters.

Minshew regained the starting spot briefly, but he was sacked five times at Baltimore and missed several open receivers deep. He also took a safety, lost a fumble and had an interception that was returned for a touchdown negated by a roughing-the-passer penalty.

The bottom line: Minshew has shown more flaws than flashes since early in his rookie year. He’s a 6-foot-1 quarterback with an average arm and average mobility. And even though he remains in a competition for the starting job, most everyone expects Lawrence will earn the nod before the season opener.

In the meantime, Minshew won’t complain or ask for a trade.

“That’s something I’ve never been through. Never kind of went through this ordeal,” Minshew said. “But I’ve learned (to) let your agent handle all that stuff. Like I said, control what I can. I can’t control what team I play for.

“I control how I prepare, how I work, how I interact with the guys around me, so those are the things I’m focusing on. And I believe that if I do all the right things, I can play in this league as long as I want.”