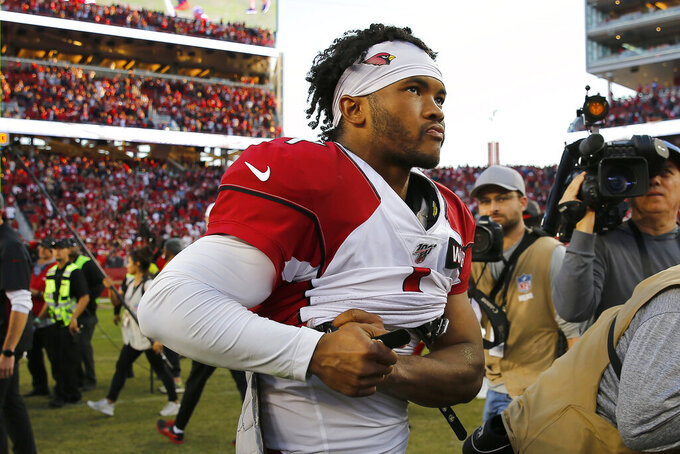 SANTA CLARA, Calif. (AP) — With the game on the line, Chandler Jones dropped into coverage instead of doing what he does best and rushing the quarterback.

Jones was unable to keep up with the faster and shiftier Jeff Wilson Jr. and gave up a go-ahead 25-yard touchdown pass with 31 seconds remaining, sending the Arizona Cardinals to their fourth straight loss with a 36-26 defeat by the San Francisco 49ers on Sunday.

“I’m not going to use the word frustrating,” Jones said. “We just have to grow. If you are watching these games and look at the film, we are right there. It can be tough the closer the games are.”

After being unable to generate a single first down after preserving a three-point lead with a red-zone interception late in the fourth quarter, the Cardinals (3-7-1) turned to their defense to make a big play to deliver a win against the first-place 49ers (9-1).

But Jimmy Garoppolo managed to move the ball into field-goal range after narrowly converting a third-and-3, setting the stage for the key play of the game.

Defensive coordinator Vance Joseph called for a blitz that left Jones in coverage despite his NFL-best 53½ sacks the past four seasons against Wilson, who was on the field for his first offensive snap of the game.

Wilson lined up to Garoppolo’s left in a shotgun formation and saw immediately that he would likely have a mismatch. He faked toward the outside and then beat Jones back inside with no help in the middle for the game-winning touchdown.

“I get the call and I play the call,” Jones said.

David Johnson then fumbled on the first play of the next drive for Arizona and San Francisco tacked on a late touchdown on the final play after a botched lateral by the Cardinals. That was the only thing that prevented this from being a third straight loss by four points or fewer for the young Cardinals led by No. 1 overall pick Kyler Murray and first-year coach Kliff Kingsbury.

“There are plays throughout the course of that game that of course you would love to have back,” veteran receiver Larry Fitzgerald said. “In pivotal moments, you just have to be able to say, ‘You know, this is a learning experience. We need to fix this or fix that.’ That’s something that comes with experience. When you have prolific playmakers like we have that are young guys, they can learn from these moments and grow and get better as we move forward.”

While the winning play came against Arizona’s defense, the offense had chances to win the game, especially after Jalen Thompson intercepted a pass from Garoppolo with 4:32 to play. But two straight runs netted 5 yards before Murray was sacked by Arik Armstead on third down.

That forced a punt and let to San Francisco’s winning drive for a win in a game Arizona led 16-0 in the first half.

“Everything we had was there,” Murray said. “We shot ourselves in the foot a couple of times. At the end of the day, we had our chance to win the game. We just did not put them away. They're a good team. When you play good teams, you cannot do that."