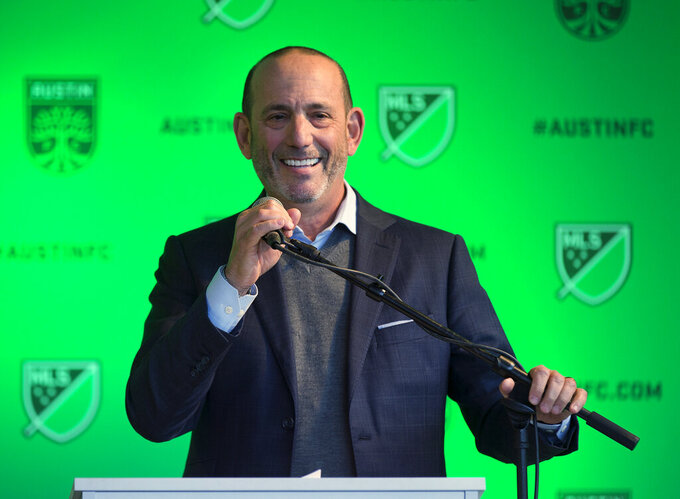 FILE - In this Jan. 15, 2019, file photo, Major League Soccer Commissioner Don Garber announces that Austin will be an expansion franchise for the 2021 season, in Austin, Texas. Garber's contract has been extended by league owners for five years through 2023. (Ricardo B. Brazziell/Austin American-Statesman via AP, File)

Garber's previous contract expired at the end of 2018.

He was hired in August 1999 to succeed Doug Logan, MLS's first commissioner.

Garber, 61, spent 15 years with the NFL. He was senior vice president of its international division when he was recruited for MLS by Robert Kraft and Lamar Hunt, owners of teams in both leagues. Garber was inducted into the U.S. National Soccer Hall of Fame last year.

Under his leadership, MLS has more than doubled in size from 12 to 27 teams and helped develop a boom in soccer stadium construction in the U.S. and Canada. MLS teams have 20 soccer specific stadiums, up from just the one in Columbus, Ohio, when Garber joined MLS, and Minnesota's Allianz Field opens this year.