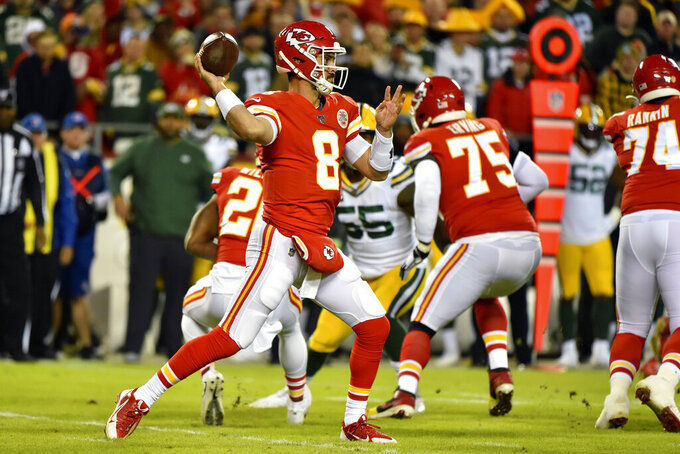 KANSAS CITY, Mo. (AP) — The Kansas City Chiefs are hopeful that Patrick Mahomes will be able to play next week against Minnesota, especially having practiced on a limited basis just days after dislocating his kneecap.

Hope is not lost if the reigning league MVP misses a second consecutive game.

Fill-in quarterback Matt Moore and the Kansas City defense showed in a 31-24 loss to the Green Bay Packers on Sunday night that they can keep the Chiefs' season afloat until their biggest star makes his return to the field. Moore threw for 267 yards and two touchdowns without an interception while Kansas City's defense pressured Packers quarterback Aaron Rodgers throughout the night.

"I thought we played really well on the back end," Chiefs safety Tyrann Mathieu said. "Guys up front did a good job getting to the quarterback. Aaron Rodgers is Aaron Rodgers — he's going to make some plays. But we felt like we left some plays out there tonight."

Packers running back Aaron Jones still caught nearly 160 yards in passes and went for two TDs, and Rodgers still made enough throws to lead the Packers to the go-ahead score in the fourth quarter.

But it wasn't as if the Chiefs rolled over just because Mahomes was on the sideline.

That should give them a boost of confidence with the Vikings coming to town.

"There's always going to be something in every game. It's never as good as you think and it's never as bad as you think," Moore said. "We'll look at it and see what we need to do moving forward."

The Chiefs (5-3) have lost three straight games at Arrowhead Stadium, a surprising slide given the way their fans provide a raucous home field atmosphere. But they are still in control of their AFC West title hopes, and that means they still have plenty to play for this season.

Especially if Moore and their defense can hold the fort until reinforcements arrive.

Yes, getting Mahomes back will be a huge boon to the Kansas City offense. But so would the return of left tackle Eric Fisher (groin) and left guard Andrew Wylie (ankle), just as the return of defensive tackle Chris Jones (groin) and defensive end Frank Clark (neck) would help out that side of the ball.

"We've got to get the numbers back," Chiefs coach Andy Reid said. "Get a few guys healthy here."

The secondary, already without slot corner Kendall Fuller, lost cornerback Bashaud Breeland for a period because of a sternum injury. He returned later in the game. But with its numbers depleted, the defensive backfield still fared well against Rodgers and Co. throughout the game.

The Chiefs' pass catchers could use some stickier gloves. Sammy Watkins dropped an easy throw over the middle, Travis Kelce had a throw go between his hands in the end zone and fellow tight end Blake Bell dropped another pass from Moore when he was wide open in the flat.

Running back Damien Williams was the starter this season, dealt with injuries and fell behind LeSean McCoy on the pecking order. But he finally got going against Green Bay, getting the bulk of the carries after McCoy's costly second-half fumble and finishing with 30 yards rushing and a TD.

McCoy has a reputation for carrying the ball loose, but he hasn't been known for fumbling in his college and pro career. The ball he coughed up against Green Bay, deep in Chiefs territory, was knocked out from behind while he was running through traffic at the line of scrimmage.

8 — The number of different targets Moore threw to Sunday night, helping to keep the Green Bay defense guessing. His favorite receiver was Tyreek Hill, who caught six passes for 76 yards.

Besides getting everyone healthy, the Chiefs need to figure out a way to win at home. They get another chance with the Vikings coming to town Sunday.