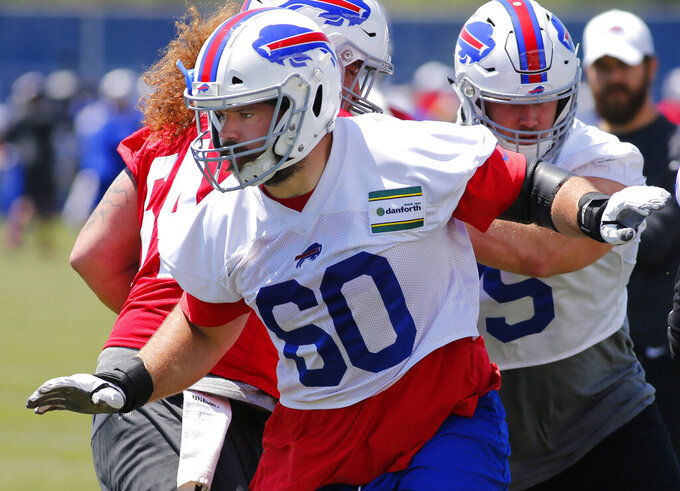 PITTSFORD, N.Y. (AP) — Mitch Morse is so level-headed the new starting center for the Buffalo Bills recounted how he was usually the one lineman asked to address the media after losses during his previous four seasons in Kansas City.

It's not exactly a point of pride for Morse, because he hates losing. And it's not to suggest he was attempting to seek out the spotlight.

Morse instead brought up his past role after being complimented on his ability to put people at ease.

"It's part of the gig, man. Losses are tough in this league. You're so emotionally driven that it's easy to lose your composure. And you guys have a job to do, right?" he said, referring to the media. "I've always been able to keep kind of a level head. ... It's just something I've been able to do."

It's a leadership quality the Bills took into account in making Morse the centerpiece of their offseason plans to overhaul what had been a patchwork offensive line.

Of the nearly 20 veterans — six of them offensive linemen — Buffalo added, the 27-year-old Morse landed the most lucrative deal in signing a four-year, $44.5 million contract.

The free-agent deal reflected the Bills' emphasis on the center position.

Just as important, it represented the faith the team has in Morse to anchor a line that could feature as many as four new starters; assist in quarterback Josh Allen's development entering his second season; and address a leadership void that was left open last season after center Eric Wood abruptly retired because of a career-ending neck injury.

"Being strong up the middle, it rings true in this sport, and that's why Mitch was the guy we spent the most money on for a reason," general manager Brandon Beane said.

"Mitch is a stabilizing force. He's calm. He's confident. He's a natural leader," he added. "And then you look at the tape, and he's been a very good player."

Morse isn't taking his new responsibilities for granted, even after missing most of the spring recovering from surgery to repair a groin injury. He has been limited to working out individually on the sideline the past two practices, but the Bills haven't provided a reason.

Difficult as it was being sidelined this spring, Morse spent his downtime at the team's headquarters watching game tape, building rapport with his fellow linemen and addressing the team's rookies in May.

"I hold myself to a high standard, and there's a reason why they brought me here, and there's a price they put on it, and I've always wanted to live up to expectations," Morse said. "I think it's a show of good faith on their part, and I want to reciprocate that."

Selected in the second round of the 2015 draft out of Missouri, Morse was a four-year starter in Kansas City. He was part of a Chiefs offense that made the jump from being ranked 27th in yards gained during his rookie season to fifth two years ago under quarterback Alex Smith and the very top of the league last season with the dynamic Patrick Mahomes behind center.

The Bills believe Morse's familiarity with Mahomes will carry over with Allen, who also is known for his ability to scramble and make plays outside the pocket. Another connection is Morse playing under Chiefs coach Andy Reid, who helped groom Bills coach Sean McDermott.

"I know those two guys have great rapport and they really do care for each other," Morse said, when asked if Reid's name came up during talks with McDermott. "To answer your question the long way, not so much. We're here to make our own stories."

"It kind of makes it interesting, doesn't it?" he said. "We've got to expedite that process a bit. It can be done."

"He's extremely calm, which is different," Dawkins said. "Like he's never amped up, crazy. He brings that perfect energy that just keeps everybody together."

Morse said patience is the key, which is something he has drawn from growing up with a younger brother, Robbie, who has special needs after sustaining a traumatic brain injury as a child.

"I have a few rules in life, and one's don't take yourself too seriously. It's always easier to be nice to someone than to be mean. And the classic one is the Golden Rule," he said. "If you follow those three religiously, it works itself out. You're a person people want to be around."

NOTES: OL Isaac Asiata retired Tuesday, a week after signing with Buffalo. ... TE Tyler Kroft is no longer wearing a protective boot on his right foot, which he broke during practice in May. He remains on the physically unable to perform list, and it's unclear when he can begin practicing.