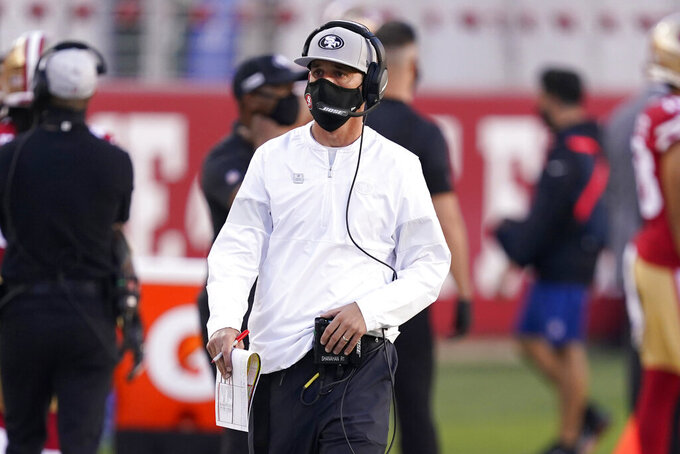 San Francisco 49ers head coach Kyle Shanahan walks on the sideline during the first half of an NFL football game against the Philadelphia Eagles in Santa Clara, Calif., Sunday, Oct. 4, 2020. (AP Photo/Tony Avelar)

SANTA CLARA, Calif. (AP) — Nick Mullens missed a wide-open Kyle Juszczyk on his second pass of the game and threw an interception that was returned for a touchdown on his last one.

It was that kind of day for the San Francisco 49ers, who were unable to put together a second straight impressive performance without injured starting quarterback Jimmy Garoppolo.

Mullens committed three turnovers, including a fumble that set up Philadelphia’s go-ahead score in the fourth quarter and the pick-six that helped seal a 25-20 win for the Eagles on Sunday night that sent the Niners to their second home loss this season.

A week after throwing for 343 yards and a touchdown in a win over the Giants, Mullens wasn’t nearly as sharp for the 49ers (2-2) against a much tougher Eagles defense.

He threw an interception in the red zone in the first half to deny the Niners a scoring opportunity and then melted down a bit in the fourth quarter.

With San Francisco nursing a 14-11 lead, Mullens lost a fumble on a strip sack by Cre’Von LeBlanc that Malik Jackson recovered. That set up the go-ahead score for the Eagles on Carson Wentz’s 42-yard touchdown pass to Travis Fulgham.

Then on the next possession, Mullens threw another interception that Alex Singleton returned for a touchdown.

“I just wasn’t as accurate as I needed to be,” Mullens said. “I felt like we could have taken advantage of some opportunities that were there. ... I just need to execute better.”

Coach Kyle Shanahan pulled Mullens after this third giveaway and C.J. Beathard tried to lead a late comeback that ultimately fell short when his desperation heave fell incomplete in the end zone on the final play.

Mullens had just put San Francisco in too big a hole. The night started off on the wrong foot when he missed Juszczyk on a deep shot on the opening drive.

Mullens was off for most of the game as he was unable to connect with his wide receivers. All-Pro tight end George Kittle had a big day with a career-high 15 catches for 183 yards and a score but it wasn’t nearly enough.

“I wasn’t able to get him in much of a rhythm today,” coach Kyle Shanahan said. “He had a challenge with that front. I know and Nick knows he can play better.”

The Niners hope they won’t need to see that for a while. Garoppolo has missed the past two games with a sprained ankle but could be ready to return next week when San Francisco hosts Miami.

Getting their starting quarterback back on the field will be a big boost to the defending NFC champions, who have lost their first two home games of the season.

They have been hampered significantly by injuries, with season-ending injuries to defensive linemen Nick Bosa and Solomon Thomas. Garoppolo, Kittle, star cornerback Richard Sherman, No. 1 receiver Deebo Samuel, running back Raheem Mostert and edge rusher Dee Ford are among the other key players who have missed time this season.

“I don’t feel that we’re playing to our standard that were capable of playing," said defensive lineman Arik Armstead. "But it’s a long season. It’s just the first quarter of the season. We have a lot more games and I’m excited to continue this journey and get better. I feel like when we get our guys back at full strength, we’ll be in a good place."