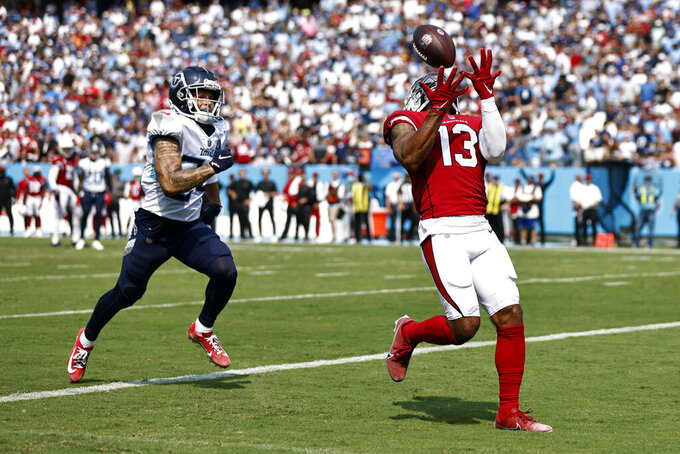 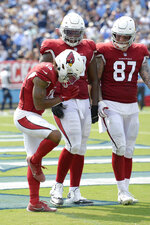 NASHVILLE, Tenn. (AP) — Kylar Murray provided a dazzling hint of how much better he might be in his third NFL season. Chandler Jones made it very clear why the Arizona Cardinals need to sign him to the new contract he wants — and soon.

Murray scored five touchdowns and Jones had a career-high five sacks as the Cardinals simply dominated the Tennessee Titans 38-13 Sunday for a big road win to open the season.

“I won't let our offense get complacent,” Murray said. “We know how good we can be. We know the sky's the limit for us.”

Jones, who tied the franchise record, had three sacks in a first quarter so good LeBron James chimed in on social media for his Defensive Player of the Year candidacy. Jones also forced two fumbles the Cardinals turned into 14 points.

“It was epic,” Cardinals safety Budda Baker said of Jones' performance. “I think it was one for the ages.”

Murray tormented the Titans throwing for 289 yards with a career-high four TD passes, two apiece to All-Pro wide receiver DeAndre Hopkins and Christian Kirk. Murray's best pass came came early in the third quarter off his back foot to Kirk on a beautiful floater Kirk simply ran under.

“Playing with a guy like Kyler you know what to expect,” Hopkins said. “The play is never over until he's on the ground. For us, it's just being where he needs us to be. Sometimes it's freestyling, sometimes with him and just getting open, finding an open spot.”

Arizona scored the first 17 points and moved the ball almost at will against Tennessee. Murray either bought time scrambling around until he could find an open receiver or just kept the ball. Murray was so wide open on a keeper he held the ball up almost immediately on a 2-yard TD for a 24-6 lead.

“It’s unfortunate,” Vrabel said. “It is disappointing. There is no other way to put it. It sucks when you lose.”

The Titans not only won the AFC South last year, they had one of the NFL’s best offenses in 2020 with Derrick Henry the AP NFL Offensive Player of the Year after rushing for 2,027 yards. They tied Buffalo for the second-most yards per game and ranked fourth in scoring, then traded for wide receiver Julio Jones in June.

They dismissed talk of rust after offensive starters had little time together this preseason. They couldn’t have been much worse when it counted. The Titans started with a three-and-out, Jones sacked Ryan Tannehill on the second play of the next drive and stripped him of the ball.

Tannehill was under constant pressure, with Michael Dogbe getting the sixth sack. Left tackle Taylor Lewan didn't talk to reporters but wrote on Twitter that he let everyone down. He also thanked Jones for exposing him.

“It will only force me to get better,” Lewan wrote.

About the only thing that didn't go Arizona's way was when Matt Prater missed a 43-yard field goal in the fourth quarter.

“We did exactly what we wanted to, particularly defensively, starting things fast, getting them off the field, and putting pressure on them,” Arizona coach Kliff Kingsbury said.

Murray became the first Cardinals player with four TD passes and a rushing TD in a game since Charley Johnson in 1962. He's just the sixth in the NFL to have such a game in a season opener and first since Ryan Fitzpatrick in 2018.

He also posted his fourth career game with at least three TD passes and a TD run. That ties Josh Allen and Jack Kemp for most such games in a player's first three seasons in NFL history.

Jones became the 17th player in NFL history with 100 sacks in his first 10 seasons after needing three to reach that mark. He also tied the franchise record set by Haason Reddick on Dec. 13, 2020 at the Giants.

His five sacks are the third most by a player in a season opener. Derrick Thomas had six to open the 1998 season, and Billy Gay had 5 1/2 for Detroit to open 1993.

Vrabel said they will evaluate the kicking position Monday. The Titans also have Randy Bullock on the practice squad.

Arizona right tackle Kelvin Beachum hurt his ribs in the third quarter and did not return.

Lewan left with cramps for a couple series in the third quarter. He was replaced by Kendall Lamm, who false-started twice in two series and gave up the fourth sack to Jones. Titans safety Amani Hooker hurt a foot.

Arizona hosts Minnesota next Sunday before going back on the road.