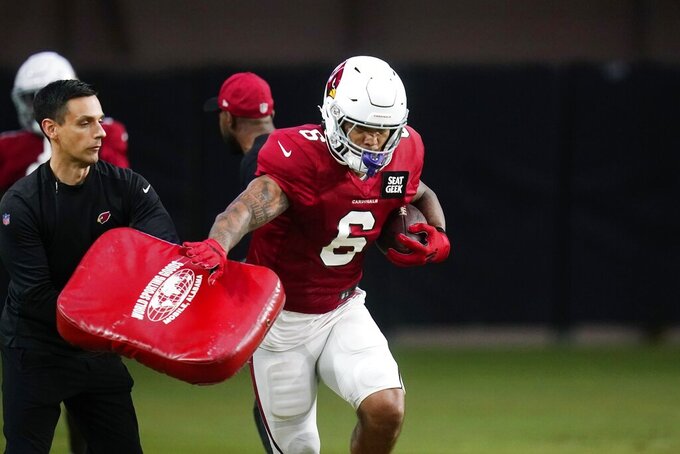 ARIZONA CARDINALS (11-7, Lost in wild-card round)

Strengths: QB Kyler Murray is with the Cardinals for the foreseeable future after signing a $230.5 million, five-year deal during the offseason. Entering his fourth season, he's already a two-time Pro Bowl selection and is one of the league's most exciting players with his ability to scramble and extend plays. RB James Conner is back after scoring a career-high combined 18 touchdowns last season and WR DeAndre Hopkins — when he returns from a six-game suspension — is still among the league's best pass catchers. Tight end is a deep spot with Zach Ertz, Maxx Williams and rookie Trey McBride. DE J.J. Watt is still a potent pass rusher who other teams must account for in the game plan. The Cardinals are also solid at the safety position with Budda Baker and Jalen Thompson.

Weaknesses: It'll be interesting to see how the Cardinals adapt without Hopkins during the first six games of the season. The Murray-Hopkins combo has been crucial to the team's success the past two seasons and when Hopkins was hurt last year, the offensive production took a nosedive. The defense must figure out a way to make up for the loss of Jones, who had 71 1/2 sacks over the past six seasons. There isn't much depth at cornerback after Byron Murphy Jr. and second-year player Marco Wilson. There's also uncertainty at linebacker: Young players Isaiah Simmons and Zaven Collins have shown ability in spurts, but the Cardinals need them to be much more consistent this fall.

Camp Development: CB Antonio Hamilton has had a good camp, which is a welcome development for a team that really needs a No. 3 cornerback. WR Greg Dortch has also impressed and there's an opening for him to get considerable playing time.

Fantasy Player To Watch: WR A.J. Green has a lot of miles on his body at 34 years old, but the seven-time Pro Bowl selection has a history of making plays. He could have some vintage production over the first six games of the season since Hopkins is out for the first six games because of his suspension. TE Zach Ertz should also get a lot of looks, too.

Expectations: The Cardinals have steadily improved over the past three years, making the playoffs last season after going 11-6. Another jump is expected after locking down Murray to a long-term extension. However, it's unclear how realistic those expectations are considering Hopkins will miss a big chunk of the season with a suspension. It's also hard to point to any spot on the roster and say the Cardinals got better during the offseason.