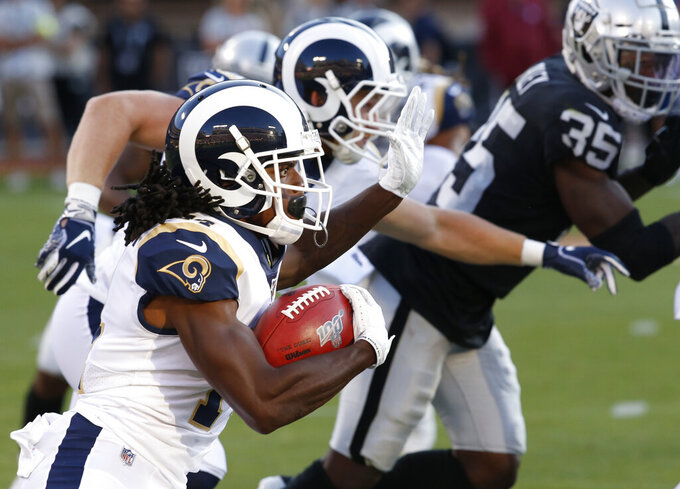 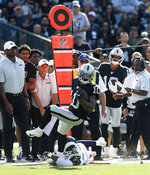 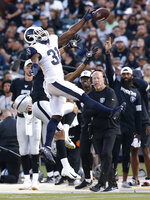 OAKLAND, Calif. (AP) — Nathan Peterman ran farther on one play in his first preseason game with the Oakland Raiders than he ever did with the Buffalo Bills.

If it helps Peterman gain an edge in the battle to be Derek Carr's backup, he's more than happy to keep doing it.

Peterman scrambled 50 yards to set up his only touchdown throw and the Raiders beat the Los Angeles Rams 14-3 in the preseason opener for both teams Saturday night.

"He can run," Oakland coach Jon Gruden said. "As he continues to gain command of the offense he's going to be an interesting guy to watch."

A starter for Buffalo in Week 1 a year ago, Peterman is competing with Mike Glennon for the backup job behind Carr. Glennon, attempting to latch on with his fourth team in four years, started and went 17 of 25 for 200 yards, but threw two interceptions.

"It was a super clean pocket and I was able to get out to my left." Peterman said. "Took off and I was about to slide then noticed that there was nobody else there. I think it was because of guys blocking downfield, guys making big plays for me. Tried to get in there, didn't quite make it."

Blake Bortles started for the Rams and played one series in place of Jared Goff. Bortles completed 3 of 8 throws for 50 yards and had a 59.4 rating.

"He's shown that he can be a big-time quarterback and he's really picked up things nicely," Rams coach Sean McVay said. "He is really unfazed by anything that doesn't go our way. It's very similar to what we love about Jared. Blake has been a great addition for us."

The Raiders were in the red zone in the second quarter when Glennon threw an interception near the goal line.

"I was thinking about calling timeout beforehand and I should have done that," Glennon said. "It was a bad throw."

Greg Zuerlein made a 36-yard field goal in the first half for the Rams.

Antonio Brown remains a topic even when he's not around the team. The heralded wide receiver has been absent from training camp due to a case of frostbite he suffered while undergoing cryotherapy in France. Brown has also reportedly filed a grievance with the NFL over a league rule that prevents him from wearing his 10-year-old helmet.

"I support this guy," Gruden said. "I don't know what anybody's writing or what anybody thinks but this foot injury wasn't his fault. This was a total accident. I know some people are smarting at it but it's really not a laughing matter.

"The helmet thing is a personal matter to him. He has a strong feeling about what he's worn on his head, and we're supporting him. We understand the league's position as well, so we're in a tough spot."

Second-round pick Taylor Rapp was mostly quiet but did make a nice play to break up a third-down pass intended for Raiders rookie Hunter Renfrow in the second quarter. Running back Darrell Henderson Jr. had a mostly disappointing night. The third-rounder was dropped for a pair of big losses early and managed 13 yards on six carries.

The Raiders spent much of the offseason attempting to improve a pass rush that was last in the NFL in sacks a year ago. They clearly still have a long ways to go, although defensive end Arden Key had a good night with a sack and two hurries.

IT'S BEEN A WHILE

Los Angeles cornerback Kevin Peterson missed all of 2018 with a torn ACL he suffered in the Rams first preseason game last year. Peterson showed some rust early when he leveled punt returner De'Mornay Pierson-El and was flagged 15 yards for fair catch interference. Peterson made up for his gaffe later with an interception near midfield and a 19-yard return.

While Brown remains missing, Oakland wide receiver J.J. Nelson has been turning heads since the start of camp with several impressive catches on deep throws. Nelson continued that trend with a leaping, turning 38-yard catch from Glennon followed by a short 5-yard reception that helped set up the Raiders' first score.

ABOUT THAT ONE PLAY

Rams rookie left tackle David Edwards had his hands full going against Raiders' first-rounder Clelin Ferrell in the first half. Edwards held his own for the first part, limited Ferrell to one tackle. But the fifth-round draft pick was called for a false start when the Rams attempted a kneel-down play before halftime.

Raiders second-round pick Isaiah Johnson left the game with a concussion in the first quarter after getting hit in the head by teammate Marquel Lee's knee. The rookie cornerback appeared woozy and had to be helped off the field before going to the locker room. Oakland got another scare in the second quarter when backup right guard Denver Kirkland limped off the field. The Raiders are already without starting right guard Gabe Jackson (knee) for two months so they held their breath until Kirkland returned.

Rams: Host the Dallas Cowboys in Honolulu on Aug. 17.

Raiders: At the Arizona Cardinals on Thursday night.