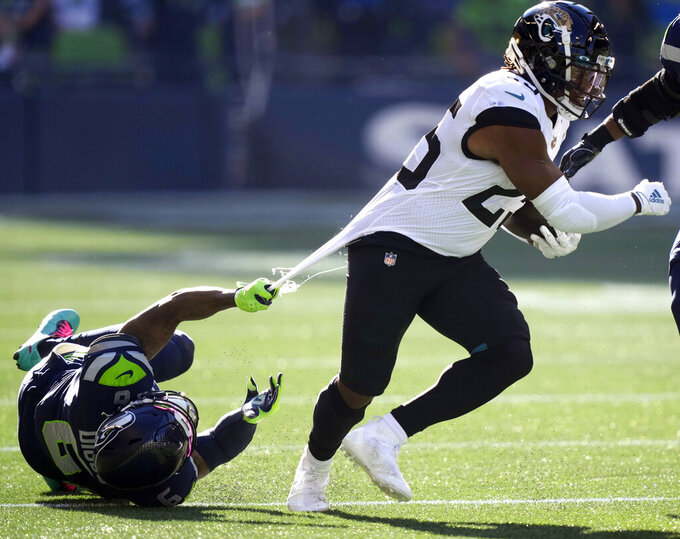 JACKSONVILLE, Fla. (AP) — Urban Meyer has one of the NFL’s slowest teams, nothing even remotely close to the speed advantage he enjoyed during tenures at Ohio State and Florida.

Now, in his first season with the rebuilding Jacksonville Jaguars, Meyer’s most dynamic offensive player is a former NFL cornerback who’s been playing receiver for less than two years.

Jamal Agnew has a team-leading 17 catches for 157 yards and a touchdown in Jacksonville’s past three games, but he’s hardly the deep threat the Jaguars (1-6) need to open the field up for everyone else.

Jacksonville’s big-play inability was evident in a 31-7 drubbing at Seattle on Sunday. The team’s longest play gained 17 yards.

“We have enough playmakers not to let that happen to us,” said Meyer, whose team hosts Buffalo (5-2) on Sunday.

When the Jags lost speedy receiver DJ Chark to a broken left foot in a Week 4 game at Cincinnati, it left them without a stretch-the-field guy. Marvin Jones is closing in on his 32nd birthday. Laviska Shenault is more likely to break tackles than ankles. And supposed speedster Tyron Johnson is struggling to get on the field because of route-running concerns.

Meyer recognized the need for more speed during the offseason. He brought in recent first-round draft picks Phillip Dorsett (2015) and Tavon Austin (2013), and then claimed Johnson off waivers from the Los Angeles Chargers. He ended up cutting Dorsett, and Austin has been relegated to a backup role.

But truly fixing the issue will have to wait until next year’s NFL draft, in which the Jags have 12 picks.

Jacksonville’s current receiving group dropped at least four passes Sunday, including some on third downs that provided no help to rookie quarterback Trevor Lawrence. Lawrence completed 32 of 54 passes for 238 yards, with a touchdown and an interception. He was under duress often but sacked just once.

“There's no secret pill or there's no secret T-shirt you could wear,” Meyer said. “It's hard work. I call it the snapshot: putting those players in position in practice so they can deal with that. But we didn't throw and catch (Sunday) very well. ...

"Hard work and the quarterback on the same page with the wide receivers, which at times they weren't (Sunday); we had a couple issues that were glaring.”

Run defense continues to be one of Jacksonville’s few strengths. The Jags held Seattle to 69 yards on 25 attempts, a 2.8 yards-per-carry average. Only one running back, Tennessee’s Derrick Henry, has topped 100 yards against Jacksonville this season.

Other defensive breakdowns, however, overshadowed the latest effort. The unit failed to cover Tyler Lockett (12 catches for 142 yards), was penalized twice for roughing the passer and was nearly flagged for having 12 men on the field on consecutive plays. Meyer called timeout to avoid the second one.

The Jaguars clearly aren’t built to play from behind. Jacksonville's offensive line is slightly better than average, especially when running the ball, but not good enough to hold up when defenses know Lawrence has to throw. It certainly doesn't help being without center Brandon Linder (ankle/knee) and right guard A.J. Cann (knee).

He faces the other Josh Allen, Buffalo's star quarterback, for the first time Sunday.

Rookie cornerback Tyson Campbell continues to look lost while trying to play the ball in the air. He was no match for Lockett.

Campbell, the 33rd overall pick in the 2021 draft, has 26 tackles and three passes defensed in five games.

Running back James Robinson bruised his right heel in the first half against Seattle and is considered day to day, Meyer said Monday.

8 — number of Jaguars players remaining from the team's 2017 postseason victory against Buffalo at home. Three of those — Linder, Cann and tight end James O'Shaughnessy — are injured and won't play.

Get Robinson healthy and get back to being offensively balanced. That provides the Jaguars their best chance for getting another win.