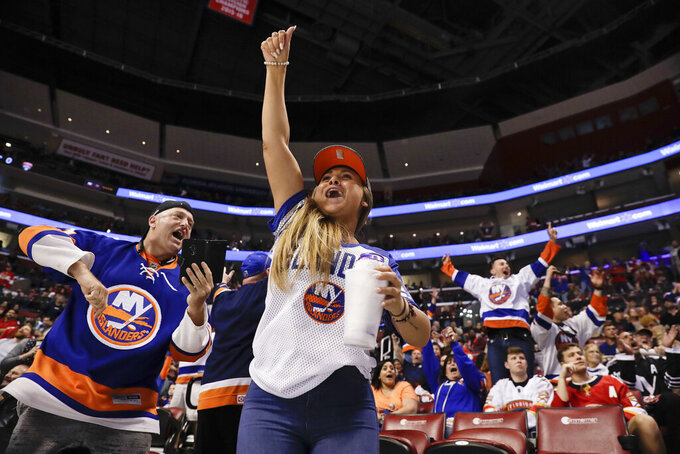 Marti Provenzano, of Rye Brook, NY., celebrates after a shot on goal by Florida Panthers' Aleksander Barkov was saved by New York Islanders goaltender Thomas Greiss during during the first period of an NHL hockey game on Thursday, April 4, 2019, in Sunrise, Fla. (AP Photo/Brynn Anderson) 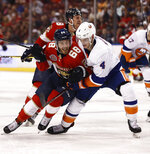 SUNRISE, Fla. (AP) — Brock Nelson made sure the playoff-bound New York Islanders still control their destiny in the final game of the season.

Nelson scored in the second period and then got the winner in the fourth round of the shootout to give the Islanders a 2-1 victory over the Florida Panthers on Thursday night.

New York remained two points ahead of Pittsburgh for second place in the Metropolitan Division and home-ice advantage in the first round of the playoffs. The Islanders need to earn just one point in the season finale at Washington on Saturday to clinch second.

"I've been high on it (home ice) all year, but it's not going to matter," coach Barry Trotz said. "You look at our record home and away, they're almost identical. We don't change the way we play on the road, at home. Would we like home-ice advantage? Yes, we would for our fans."

Thomas Greiss finished with 29 saves through overtime and thwarted all four Florida attempts in the tiebreaker as the Islanders won for the third time in four games.

"He was outstanding in the shootout against them, pretty dynamic people," Trotz said. "He was really good."

Jonathan Huberdeau scored the tying goal for the Panthers with 7:15 left in the third period. Sam Montembeault had 35 saves in his 10th NHL start.

"He (Montembeault) played amazing. He gave us a chance," Panthers coach Bob Boughner said." He held us in there and gave us a chance to eventually get the point and almost two. I thought he and Greiss were two of the best players on the ice."

Nelson gave the Islanders a 1-0 lead on his 25th goal of the season, a one-timer from the right circle that got past Montembeault at 1:50 of the second.

"I thought we did a really good job tonight, played a good game," Nelson said. "Greiss made a lot of saves, four big ones in the shootout. Big for us to come down here, get this one and now on to the next one with another big test to finish it off."

Huberdeau tied it on the power play as his shot from the slot trickled between Greiss's pads for his 29th goal and 90th point of the season.

"It's nice, a career-high in points," Huberdeau said. "It's a good year, but I'd rather have 60 points and make the playoffs."

NOTES: Huberdeau joined Aleksander Barkov with 90 points this season, the first time the Panthers have had two players reach the plateau in one season. ... Panthers G Roberto Luongo turned 40 on Thursday. Luongo is the oldest goalie in the NHL, and third oldest player. ... Islanders D Thomas Hickey returned to the lineup after being a healthy scratch the past six games. ... Miami Dolphins coach Brian Flores dropped the ceremonial first puck.

Islanders: At Washington on Saturday night.