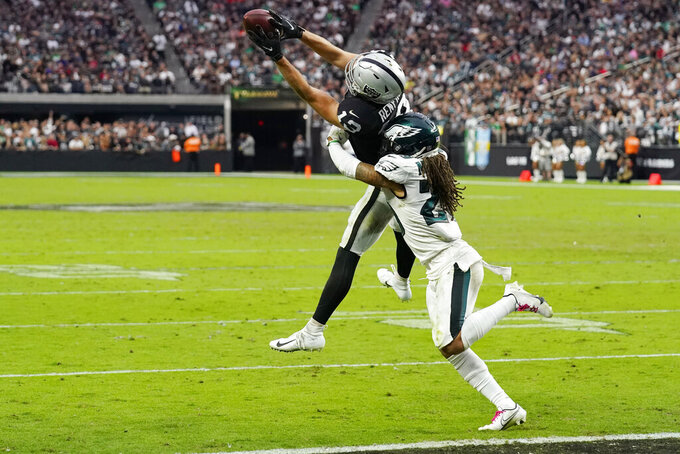 A new coach has made the Las Vegas Raiders look like a new team the past two weeks.

The Raiders went from back-to-back double-digit losses in their final two games under Jon Gruden to consecutive double-digit wins after following last week's victory at Denver with a 33-22 win at home against Philadelphia on Sunday.

It's the first time the Raiders (5-2) have had such a turnaround since 1992 as they head into their bye week in sole possession of first place in the AFC West for the first time since the final week of the 2016 season.

“We’re having a blast, winning is fun, that’s for sure,” quarterback Derek Carr said. “Losing in the NFL is hard on everybody. But when you win, it’s a lot of fun and right now we are having a lot of fun.”

It's easy to have fun when everything is working as well as it did on Sunday. The Raiders averaged more than 7 yards per play for the second straight week and scored 30 unanswered points to put away the Eagles.

“I'm having the time of my life,” Bisaccia said." I told those guys, time and time again, I have three priorities in my life. I have my wife, I have my children and I have the players. That’s the same thing when I was just doing special teams and it hasn’t changed here. We end a lot of the meetings the night before the game saying you just got to find a way to have more fun than you’ve ever had before. Sometimes in this league, the only way to do that for us is to win games."

The passing offense. Carr has been in complete control offensively the past two weeks with Greg Olson calling plays. He completed 31 of 34 passes against the Eagles for 323 yards and two TDs despite missing star tight end Darren Waller.

Denzel Perryman in coverage. The Raiders linebacker has been solid against the run this season but was exploited in coverage by the Eagles. Perryman allowed seven catches on seven targets for 108 yards and two TDs in the game.

Offensive line. The much-maligned line has shown signs of improvement the past two weeks. The running game got going a bit and topped 100 yards for just the second time all season. The Raiders also didn't allow a sack for the first time all year.

DL Clelin Ferrell. The fourth overall pick in the 2019 draft has become an afterthought in Las Vegas this season. He was a healthy scratch for the opener and has averaged less than 16 defensive snaps a game over the past six weeks. He has been in on just three tackles all season and has no tackles for loss and one quarterback hit.

RB Josh Jacobs left the game with a chest injury but checked out fine and should not miss any time. ... Waller missed the game after spraining his ankle in practice on Friday. He will remain in town to rehab during the bye week but is not expected to miss another game.

The Raiders have a bye before visiting the New York Giants on Nov. 7.