New England's Mills, Agholor return to their roots in Philly 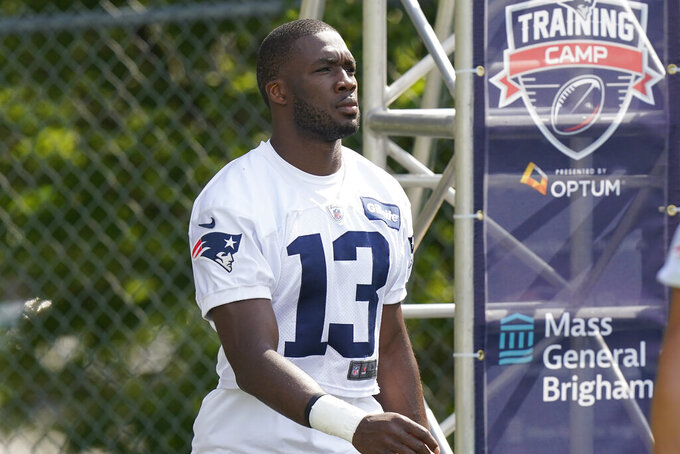 On Monday, Mills and Agholor returned to Philadelphia wearing Patriots uniforms as the Eagles hosted New England in the first installment of a two-day joint practice ahead of their preseason game Thursday night.

Mills, who is back at cornerback after playing safety for the Eagles last season, and Agholor, who had a career-best 896 yards receiving with the Raiders last season, were two of the better performers for New England on a day when the Eagles seemed to have more juice, particularly when the starting units faced off.

But neither player was eager to discuss old times, or dwell on the circumstances of leaving in free agency.

Agholor, a 2015 first-round pick, left Philadelphia a year ago after failing to live up to high expectations, He averaged 18.7 yards per catch for the Raiders on his 48 receptions, including eight touchdowns, but wasn’t re-signed.

“I can’t focus on that. I’m super happy with the opportunity I have to be a Patriot,” Agholor said.

A question about his up-and-down five seasons as an Eagle drew a similar answer:

“I don’t think anything in my life was a mistake. There’s no ‘what-ifs.’ It’s all a part of whatever was forming,” Agholor said. “It’s great (to be back at the Eagles’ facility). I think this is a beautiful place. I’m super happy for the opportunity we get to practice vs. the Eagles. Also, for me to be back here and see a lot of wonderful faces.”

Mills also spent five seasons with the Eagles. He switched positions last year after Malcolm Jenkins left Philly. Now, he’s back on the outside, and with Stephon Gilmore sidelined with a quad injury Monday, Mills seemed to be New England’s most aggressive, effective cornerback.

“We’re in the dog days of camp right now, where, you wake up and it’s another day and you’re beat up and you’re tired. I think having joint practices like this, going against a new face, a new opponent, it just gets the juices flowing,” Mills said.

“I’ve got memories here. We did something that will be in the books forever. I have history with a couple of the guys, but I just see it as a new journey. ... This is the next chapter.”

In 11-on-11 play, Eagles second-year quarterback Jalen Hurts was more effective than Cam Newton, who held onto the ball too long and often threw late. Hurts said afterward that he was honored to meet Newton, the 2015 NFL MVP. Newton said he became aware of Hurts when the young QB was in high school in the Houston area. Hurts, nearly perfect in full-team setups, was intercepted twice in 7-on-7.

Asked about the Eagles being more physical, Newton said with the two teams together, there was “a field full of Alpha males. Ain’t nobody gonna blink.”

Newton’s most memorable mistake was an end zone interception that hit Eagles linebacker Eric Wilson right between the numbers. Newton said the scenario of the red zone drill was third-and-4 with 7 seconds remaining, and he didn’t want to take a sack — Javon Hargrave was pressuring — so he took a chance on a low-percentage throw.

NOTES: Eagles DE Derek Barnett leveled Pats TE Matt LaCosse, who left the field and did not return. LaCosse was trying to chase down Newton’s pass and slammed full speed into Barnett, who was standing still. Barnett braced for the impact by dipping his shoulder, which made contact with LaCosse’s head. ... Eagles CB Darius Slay left the field late in practice after a collision with teammate Avonte Maddox, but Slay remained on the sideline. ... Eagles first-round rookie WR DeVonta Smith (knee) took part in individual drills for the first time since he was injured on July 31. ... LaCosse’s departure left the Pats short at tight end, where Hunter Henry (shoulder) and Jonnu Smith (ankle) did not practice. ... Even with the Patriots, Mills still keeps his hair dyed bright green. Mills, who declared himself “The Green Goblin” when he arrived with the Eagles, said: “I’m the Green Goblin. Superman flies all around the world, his cape stays the same color, so, gotta keep the green.”