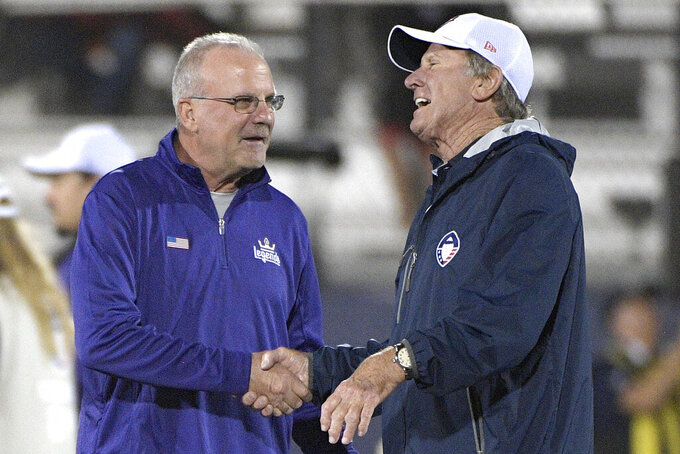 The Alliance of American Football was a ratings winner in its inaugural weekend, but founder Charlie Ebersol realizes it is a small sample size.

"We feel really good about them and that our theory that Americans want more football tends to be true," Ebersol said in a phone interview. "However, we still have to remain slow and steady in building things. We are going to be facing stiff competition as soon as next month (with the NCAA Tournament)."

The games Saturday on CBS averaged 3.25 million viewers, which was more than ABC's broadcast of the Houston Rockets against the Oklahoma City Thunder (2.67 million), according to Nielsen. Most of the country could see San Diego at San Antonio while the rest could see Atlanta at Orlando.

The AAF ratings are comparable to the 3.32 million viewers that CBS averaged for a pair of NFL preseason games last August. However, the broadcasts Saturday from San Antonio and Orlando will be the only games on CBS until the championship game on April 27 in Las Vegas.

NFL Network will have the games on Saturday and Sunday nights while the CBS Sports Network has the Sunday afternoon game. TNT will be doing the game from Birmingham next Saturday afternoon, but the next eight weeks it will be streamed on B/R Live.

The broadcast Sunday night on NFL Network averaged 640,000 viewers. Many observers will be following the NFL Network numbers over the next couple weeks since the rest of the games will be on cable.

Most of the production is being done from Sneaky Big studios in Scottsdale, Arizona. Pregame, halftime and postgame shows will be done from the facility and some games are being announced remotely.

All the games the first week had the same graphics packages and production elements, which have given the broadcasts consistency.

"It was essential to us and our partners that viewers felt like they were tuning in to one product. One thing that has been heartening is the quality of the production," Ebersol said.

The league also received mostly positive reviews on social media. The first viral video moment came less than half an hour into the opening games when San Antonio's Shaan Washington laid a massive hit on Mike Bercovici that knocked the helmet off the San Diego quarterback.

The league is not receiving rights fees from networks. Ebersol described the league's relationships not as time-buys, but as "partnerships that extend beyond just broadcasts."

At its core, the league is equal parts sports and technology startup. Its app, which is the second-most downloaded sports app on Apple's App Store, features real-time visualization of plays along with users trying to predict plays. As more states begin to legalize sports gambling, that technology could be marketed to other platforms.

"What we are looking to do is create a structure that is equitable for the network," Ebersol said. "People paying for media rights are losing money. In the modern tech world, you want to get people engaged in the product and there is an enterprise value. CBS has been buying into technology companies and Turner bought Bleacher Report a couple years ago."

Ebersol is also keenly aware that the biggest driver to keep fans coming back is the quality of football. Ebersol was in Las Vegas for the opening game of the XFL in 2001 and remembers how disappointed his father — former NBC Sports president Dick Ebersol — was with the level of play. Coincidentally, Dick Ebersol is a member of the AAF's board of directors.

Neal Pilson, the former president of CBS Sports who now runs his own sports television consulting company, said the biggest barometer of whether the league is a success is the fans' attachment to the teams and players.

"Any new league has to create some emotional link," Pilson said. "Can they get people to root for coaches, quarterbacks or running backs? We're not going to know that for a while."