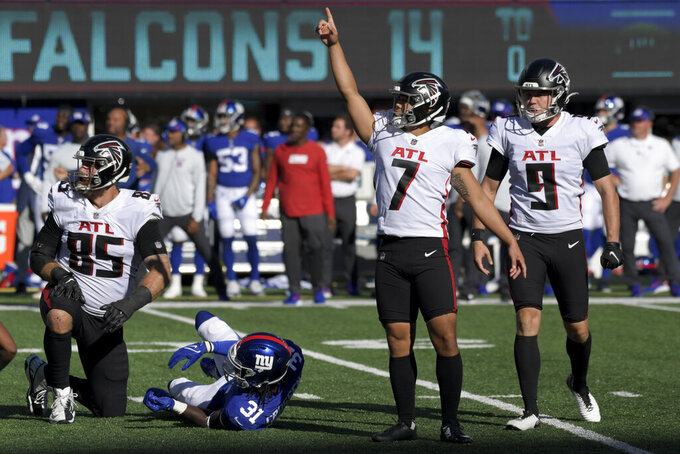 EAST RUTHERFORD, N.J. (AP) — The New York Giants are hurting in more ways than one.

Having three starters leave the game with injuries in the first half against the Atlanta Falcons on Sunday was the physical hurt.

The mental anguish was just as bad after the winless Giants (0-3) dropped a 17-14 decision to the Falcons on a 40-yard field goal by Younghoe Koo on the final play of the game.

It was their second straight loss on the final play of the game. Washington beat them 30-29 on Sept. 16 when an offside penalty allowed Dustin Hopkins to shake off a miss and kick the winner.

There's another factor to consider. Giants fans are frustrated with another bad start after years of losing. That was supposed to change this year following a 5-3 finish to last season under rookie coach Joe Judge. Now it seemingly is heading to another year of losing.

Co-owner John Mara was booed at halftime when he spoke during the ceremony to retire the No. 10 jersey of two-time Super Bowl MVP Eli Manning.

They booed tight end Evan Engram after a fumble and a drop, and later cheered when he left the field. And when Koo added to their woes, they just booed more.

“I think guys are frustrated and certainly disappointed with the results,” Daniel Jones said after hitting 24 of 35 passes for 266 yards. “We’re all competitors and we want to win and we expect to win, so that’s frustrating, and we’ve got to understand that and feel that today.”

The fans wanted none of it. The Falcons (1-2) came into the game giving up an average of 40 points and New York did not capitalize. It gained 346 yards and had two long drives that ended up with Graham Gano field goals.

While the defense played its best game of the season, Logan Ryan dropped two potential interceptions and Adoree Jackson blew one in the end zone just before Matt Ryan threw a tying TD pass to Lee Smith with 4:13 to play.

The unit also surrendered a winning drive on the final series for the second straight game.

“Obviously, you prepare every week to have success. You come out of any game without success and there are things you’re obviously not happy about,” Judge said. “The key for us is to make sure that we go back to work, we correct the mistakes, we keep being productive in things we’re doing well and we stay together as a team and keep pushing forward. That’s the biggest-picture thing right now.”

Saquon Barkley, who scored on a 1-yard run to help the Giants go ahead 14-7 early in the fourth quarter, doesn't think New York is far off.

“We're this close, this close,” he said. “We keep saying it. Somebody has to do something about it, and that's me and the leaders of this team. We have to step up and make plays.”

Barkley has not played on a winning team with the Giants since joining in 2018 as the No. 2 overall draft pick.

“I am sick of losing. No one wants to lose,” said Barkley, whose touchdown was his first since a major knee injury early last season. “Everybody is sick of losing but I would not consider us a bad team.”

At 0-3, the Giants are in the bottom echelon with 14 more games to go.

The Giants lost leading tackle Blake Martinez to a knee injury on the opening series and wide receivers Darius Slayton and Sterling Shepard to hamstring injuries in the opening half. After the game, Judge said he hopes they can return soon. He had no update on their conditions.