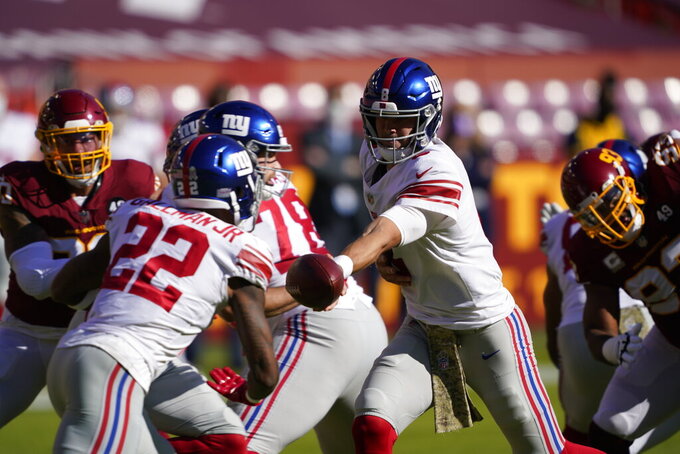 New York Giants quarterback Daniel Jones (8) hands the ball off to running back Wayne Gallman (22) during the first half of an NFL football game against the Washington Football Team, Sunday, Nov. 8, 2020, in Landover, Md. (AP Photo/Susan Walsh)

EAST RUTHERFORD, N.J. (AP) — The New York Giants are bucking long-held beliefs about how to get an offensive line to play better.

The norm was to take your best five offensive lineman and play them until they knew each other so well they become an effective unit in both the passing and running games.

The Giants (2-7) are going their own way under first-year coach Joe Judge and veteran offensive line coach Marc Colombo. They are playing everyone who is dressed for the game.

By the end of the game, rookie tackle Matt Peart had filled in at both left and right tackle and even backup Chad Slade got time at guard, just in case one of the starters was hurt.

The rotation is going to increase in the final seven games as starting left guard Will Hernandez comes off the COVID-19 reserve list. It's quite possible Lemieux who has been outstanding in filling in for Hernandez the past two games, will see time at both guard positions, while Peart, a third-round pick, also continues to rotate at the tackles.

Gates, who made the move to center this year, seems to be the only lineman immune from the rotation system, at least for now.

Colombo said the rotation is not new for the players. The teams has used different linemen in different positions since opening training camp in August.

So when Peart takes over for Fleming at right tackle, he and Zeitler have run the same combination blocks thousands of times.

“It gives guys, you know, a chance to get a breather and get back in there,” Colombo said Tuesday. “And you can see kind of the flow of the game, too. You can kind of use these guys in different roles. So it's starting to work really well for us. And we’re kind of excited, you know, the way we’ve been playing lately. We just got to keep getting better.”

New York rushed for a season-high 166 yards against Washington, and it wasn't quarterback Daniel Jones scrambling all over the place. That was the run offense earlier in the season after star running back Saquon Barkley was lost for the season with an ACL injury.

Jones had six carries for 4 yards in the Washington game. Wayne Gallman (68 yards) and Alfred Morris (67 yards) carried the load.

Zeitler, who is in his ninth season in the league, said continuity has long been the key phrase for offensive lines.

“We also have a unique situation,” he said. “We have a lot of young O-linemen in the room, very talented O-linemen. I think given how the season has started, I think the ability to get them in there has been really good for us. Obviously, as you saw, Will unfortunately had to be gone for two games. Shane, even in practice to be able to rotate in and get reps, he was able to step in and go right away. It’s not like we missed a beat. I think it’s big because it allows us to prep and know if any injuries happened down the road, I think it’s going to be good for us.”

Colombo said the line has come a long way since the season opener when the Steelers held the Giants to 29 yards rushing on 20 carries. Barkley had 15 carries for 6 yards.

“Confidence is a big part of it,” Colombo said. “You know, it’s a confident group right now. You know, they can see themselves doing it right on film. We talked about consistency. That was that was kind of the biggest thing this whole entire season. We needed to be more consistent. You’re starting to see it now from every player on the line, you know, so all five of them. And then, you know, add Matt to the equation. Right. These guys are consistent with their technique. They’re consistent with their execution. And that’s why you kind of see some of the stuff start to work. ” ___