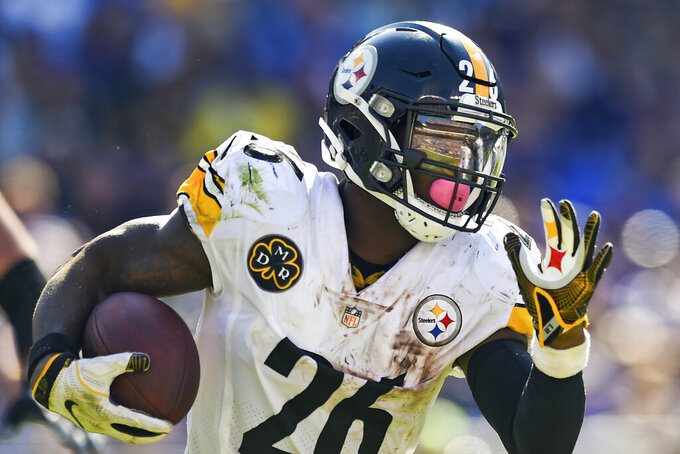 FILE - In this Oct. 1, 2017, file photo, Pittsburgh Steelers running back Le'Veon Bell (26) carries the ball during the second half of an NFL football game against the Baltimore Ravens in Baltimore. A person with direct knowledge of the negotiations says the New York Jets and Bell have agreed to a deal early Wednesday morning, Mach 13, 2019, a person with direct knowledge of the negotiations told The Associated Press. The deal gives new coach Adam Gase and second-year quarterback Sam Darnold a big-time playmaker, arguably the best player at his position before Bell opted to sit out all of last season rather than sign a franchise tender with Pittsburgh. (AP Photo/Gail Burton, File)

NEW YORK (AP) — Le'Veon Bell is leaving all the number crunching to the critics.

The star running back slept soundly after finally making his long-awaited decision on where to restart his NFL career, agreeing to a four-year, $52.5 million deal from the New York Jets early Wednesday morning and officially signing Thursday.

"The Jets were kind of the team I had in the back of my mind where I wanted to go," Bell said during a conference call. "So, you know, once the numbers made sense to me, it wasn't really a hard decision. I made the decision and I'm happy with the decision I made.

"Today, I woke up feeling amazing. So, I'm happy with where I stand."

The deal, which reportedly includes $25 million in guarantees, had some wondering if he might have made a mistake by sitting out all last season after declining a five-year, $70 million offer from the Steelers and then refusing to sign his $14.5 million franchise tender.

Bell gambled on himself and took a chance — one he's content with, regardless of whether some think he overplayed his hand and shortchanged himself.

"The decision I made is the decision I would do all over again," Bell said. "I don't regret anything that happened. Everything has happened for a reason up until this point. Who's to say if I played last year, if I do go out there and play on a one-year franchise tag and I do get hurt, do I end up in this position today, being with the New York Jets on a beautiful deal?

"Even on the other side of it, if I go out there and play on the franchise tag and I get another 400 carries ... and I come out of the season healthy, who's to say what team is going to take me after another 400 carries? So, like I said, I've contemplated everything I've done. ... I don't regret one thing. I'm happy where I'm at and the decision I made and I'm glad I'm here."

After all, Bell had dreams of being a member of the Jets as a kid.

He grew up in Groveport, Ohio, in a house full of Steelers fans, but his favorite player was Jets running back Curtis Martin. From afar, he wanted to be just like Martin, a playmaker out of the backfield who could change games in an instant on his way to a Hall of Fame career.

Turns out, Bell has carved out quite an impressive career of his own. He rushed for 5,336 yards and 35 touchdowns in five seasons for Pittsburgh, and caught 312 passes for 2,660 yards and seven scores as one of the most versatile and dangerous offensive players in the NFL. His 128.9 yards from scrimmage per game over his career is the best mark in the NFL since the 1970 merger.

And, now, he'll be able to get back on the field and make his mark for the team Martin once carried.

"When the season ended, it was kind of like all the stars kind of aligned to the Jets," Bell said. "I'm glad we made it happen and everything worked out."

Oh, and those comments over a year ago when Bell shot down a fan who jokingly offered him $60 million to play for the Jets, or when he said during last year's Super Bowl that it would take $100 million for him to come to New York?

Well, that was then.

"I mean, that was just me being on Twitter and TMZ talking," Bell said with a chuckle. "That's all that was. The situation I'm in right now, I wouldn't change it for anything in the world."

Bell's arrival comes at a time when the Jets are building around second-year quarterback Sam Darnold, who showed promise as a rookie as well as the typical ups and downs young signal callers deal with early in their careers.

But Bell, like many others, saw some promise in Darnold — and is excited about helping the youngster grow and thrive — and win — in the NFL.

"I'm just looking forward to coming in and being, you know, sort of his security blanket, a guy he can rely on," said Bell, who acknowledged that Darnold was "absolutely" a major factor in his decision.

"I'm going to do everything in my power to try to make his job as easy as possible," Bell added. "Seeing a guy like him, so young and so talented and knowing, maybe he needs another weapon. You never know what he can do with another weapon."

That's where Bell comes in. As soon as he shakes off the rust, of course.

"The fact that I took last year off, it sucked having to watch and not play football," Bell said. "But at the same time, at the end of December and through January and February, it's the best my body's feeling ever in my life. There's nothing that can even come close to compare to how I feel."

He hasn't played an NFL game since Pittsburgh's playoff loss to Jacksonville on Jan. 14, 2018. That means it will be a span of 19 months in between game appearances by the time the preseason begins in August.

"Things that count, I'll be ready for that," Bell said. "I've been playing football my whole life, so it's something that kind of comes natural to me, but obviously not having done it at a full competitive level for over a year, so it's going to take minicamp and OTAs and practices to get right, but I've got plenty of time until the regular season starts."