Next up for Tom Brady after early playoff exit? Who knows? 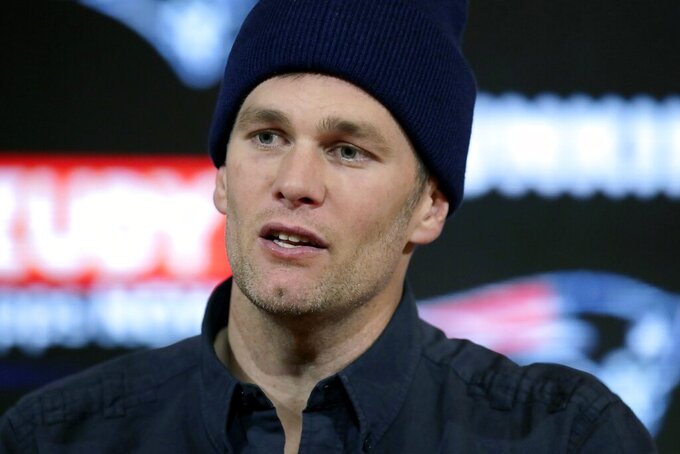 Teammates and opponents, coaches and NFL executives, even most fans recognize that Tom Brady has nothing left to prove.

Maybe that's why in the midst of the disappointment — and some discontent — with how the Patriots' season ended and how he performed in the second half of the schedule, Brady came pretty close to guaranteeing he will be back for a 21st season. At age 43.

Asked about retirement following the wild-card loss to the Texans, Brady said, ``I would say it’s pretty unlikely, but, yeah, hopefully unlikely.''

Later, to another question about his plans, Brady added:

``Again, I don’t want to get too much into the future and stuff. I mean, this team has fought hard. We battled every day, we tried to get better, we worked hard to improve, and I was proud to be a part of this team. Not only this year, but every year.

Brady doesn't need football any longer from a success standpoint. Not with a record six Super Bowl rings, four MVP honors in the big game, and three league MVP awards. Five years after he has retired, he'll be feted in Canton, Ohio as a first-ballot Hall of Famer.

He doesn't need the money, either.

What he seems to require, like so many star athletes, is the competition that spices his existence. The adrenaline explosions. The challenges.

The locker room rapport. The practices. The game planning.

Brady surely knows there are few, if any, replacements outside of the game once he leaves the sport for good. Unlike the man he is most compared to among his contemporaries, Peyton Manning, Brady doesn't fit the off-field celebrity role Manning has embraced so well.

So, barring physical ailments — and few football players ever have taken care of themselves the way Brady has — another year at the helm of the Patriots or another team appears doable. Here's a peek into which uniform Brady could wind up in for 2020.

Maybe Brady would like to try replicating his New England successes with another coach. In part to show he can reach the top in a different system and a different city. In part to display that the Patriots' dynastic run was built on his brilliance more than anything.

Should he return to Foxborough, Brady can name his price. Does anyone see owner Robert Kraft balking? Especially after some of the “hometown discounts” Brady allegedly took in past negotiations?

He also would be wise to insist on better personnel around him after the drop-off in talent level at receiver and on the offensive line this season.

Brady is a California guy; sure, it's NoCal, but he and his wife, super model Gisele Bundchen, would seem a perfect fit in SoCal.

Philip Rivers comes off one of his worst seasons and the Chargers could be ready to move on from their long-time QB. Plus, what better way to move into their new home? They will be overshadowed by the Rams in SoFi Stadium — except with Brady behind center.

Brady at 53 might be more reliable than Mitchell Trubisky was this season. And, like New England, Chicago has a top-shelf defense.

Maybe Dak Prescott isn't the answer to America's Team's nearly quarter-century Super Bowl drought. We all know how much Jerry Jones likes to create headlines. What a doozy that would be in Big D.