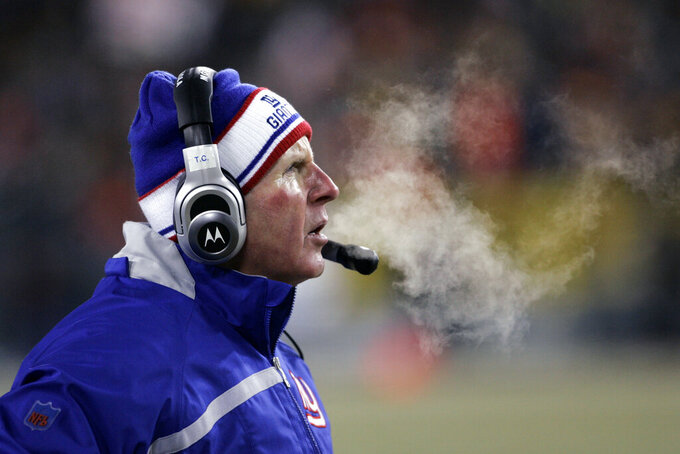 FILE - In this Jan. 20, 2008, file photo, New York Giants NFL football head coach Tom Coughlin watches during the first half of the NFC Championship football game against the Green Bay Packers, in Green Bay, Wis. The coldest NFC championship game was the Giants' 23-20 overtime victory at the Packers during the 2007 season. Coughlin's crew had knocked off the top-seeded Cowboys in the divisional round, and his bright red cheeks in the minus-1 temperature with minus-23 wind chill at Lambeau Field provided the image many remember from that game. (AP Photo/David Duprey, File) 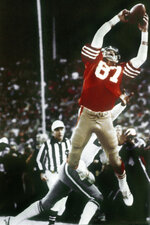 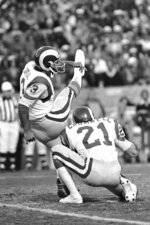 With “The Catch” that sent San Francisco to its first Super Bowl and “The Blown Call” that kept New Orleans at home, NFC championship games have two seminal moments that rank with just about any in postseason history.

There's plenty to remember from the 37 years separating those plays, and don't forget one other thing about the 49ers: They are the team that has played in the most NFC title games, making a 16th appearance, facing Green Bay on Sunday in the NFL's 100th season.

San Francisco played for the first two conference titles after the merger, losing both times to Dallas in the 1970-71 seasons before facing the Cowboys three straight times in the 1990s in arguably the best NFC championship rivalry.

And that's not even counting the 1981 season, when Joe Montana's famous throw was improbably caught by a leaping Dwight Clark in the back of the end zone in the final minute of the 49ers' 28-27 victory over Dallas.

“Start of a dynasty. I don't let myself go down the road of, 'What would have happened if he doesn't make that catch?'” former 49ers executive Carmen Policy said on the day the club paid tribute to Clark after he died in 2018 at age 61.

“As Joe Montana says, 'What would have happened if I didn't throw that pinpoint pass perfectly angled to be in the only spot where he should catch it and no one else would be able to interfere with it?' But without that play, I wonder where we would have been. And I stopped thinking about it, because so much happened after that.”

Like eight more trips to the NFC championship game in the next 13 seasons, and four more Super Bowl titles to go with that first one.

The Saints haven't been back to the NFC title game since winning the championship in their only trip to the Super Bowl 10 years ago. There's probably not a person in New Orleans who doesn't think they were robbed of another trip last season, when Rams cornerback Nickell Robey-Coleman wasn't called for pass interference when he flattened Saints receiver Tommylee Lewis on an incomplete pass.

A first down would have allowed the Saints to run the clock all the way down and kick a winning field goal in regulation. Instead, Los Angeles had time to get a tying field goal and won in overtime.

The missed call was so egregious, the NFL added pass interference to the list of reviewable plays in the offseason. The move proved wildly unpopular because so few decisions were overturned, when coaches thought so many of them were obvious. But none was as obvious as the call the Saints didn't get.

“Came to the sideline, looked at the football gods and was like, ‘Thank you,’” Robey-Coleman said after the game. “I got away with one tonight.”

The 49ers beat the Cowboys in perhaps the most-hyped NFC championship game during the 1994 season. It was billed as the Super Bowl, and pretty much ended up that way, with San Francisco later blowing out San Diego for the title. It was also only the third consecutive meeting of the same teams for the NFC title.

San Francisco led from the opening moments in the 38-28 victory, thanks to a 21-0 lead built off three straight Dallas turnovers. There were nine eventual Hall of Famers in that game. One of them, Michael Irvin, still holds the championship game record for yards receiving with 192.

It was the only loss in four title-game appearances for “The Triplets” of Irvin, quarterback Troy Aikman and Emmitt Smith, the NFL's all-time leading rusher. All are in the Hall of Fame.

The coldest NFC championship game was the Giants' 23-20 overtime victory at the Packers during the 2007 season. Tom Coughlin's crew had knocked off the top-seeded Cowboys in the divisional round, and his bright red cheeks in the minus-1 temperature with minus-23 wind chill at Lambeau Field provided the image many remember from that game.

For all the struggles in the precursor to the NFC championship game — the Giants were 3-11 in NFL title games — New York has the most appearances without a loss since the merger at 5-0. That 2007 team beat the 18-0 Patriots in the Super Bowl.

KICKING DOWN THE DOOR

The Rams lost their first four NFC title games before finally breaking through as the first team in either conference to win a title game without scoring a touchdown. LA beat Tampa Bay 9-0 on Frank Corral's three field goals before losing to Pittsburgh in the Super Bowl. All five of those NFC championship appearances were in a span of six seasons.

LA wasn't the only NFC champion that didn't score a touchdown in the title game. The Giants did it 11 years later in a 15-13 win over San Francisco that ended the 49ers' hopes for a three-peat in the Super Bowl, which still hasn't happened. Matt Bahr's fifth field goal came on the final play of one of the biggest upsets in an NFC title game.

Teams are never supposed to choose to kick off after winning the coin toss because it means they won't get the ball to start either half. But games rarely have wind gusts of 25 mph and beyond. That was the case when the Giants beat the Redskins 17-0 for the 1986 NFC title.

Coach Bill Parcells broke conventional wisdom by electing to kick off after winning the toss to make sure the host Giants had the wind to start the game. It was so unusual, the typewritten play by play had to “x” out “receive” and type “kick off” above where it read, “Giants won toss, elected to kick off.”

With the Redskins punting into the wind, New York started at the Washington 47-yard line and drove 17 yards to a field goal. Then the Giants got the ball at the 38, and Phil Simms' 11-yard pass to Lionel Manuel made it 10-0. It never mattered that the Redskins got the ball to start both halves.

Minnesota won its first three NFC championship games but lost in the Super Bowl each time. The Vikings haven't been back to the biggest stage, losing six consecutive conference title games in a skid that started with the 1977 season. Two of the losses sent the opponent to its first Super Bowl.

During the 1998 season, Gary Anderson's first missed field goal of the season, from just 38 yards, gave Atlanta a chance to tie on a touchdown in the final minute of regulation. The Falcons, big underdogs, won in overtime.

In Brett Favre's last good chance to win his second title in the 2009 season, the former Green Bay star threw an interception with the Vikings closing in on a field goal with the score tied in the final seconds. The Saints secured their only Super Bowl trip with a field goal on the first possession of overtime.

During the following offseason, the NFL changed OT rules to prevent playoff games from ending with a field goal to start the extra period. Those rules eventually were added in the regular season.

Aikman and Philadelphia's Donovan McNabb are the only quarterbacks to start four straight NFC title games. While Aikman led the first team to win three Super Bowls in a span of four seasons, the Eagles lost their first three appearances with McNabb. Philly finally broke through the fourth time, then lost the 2005 championship to Tom Brady and the Patriots.

The Cowboys and Rams were the other NFC teams to lose three straight title games. Dallas' skid defined the legacy of quarterback Danny White because those were the first three seasons (1980-82) after two-time Super Bowl winner Roger Staubach retired. “The Catch” came in the middle of that stretch.