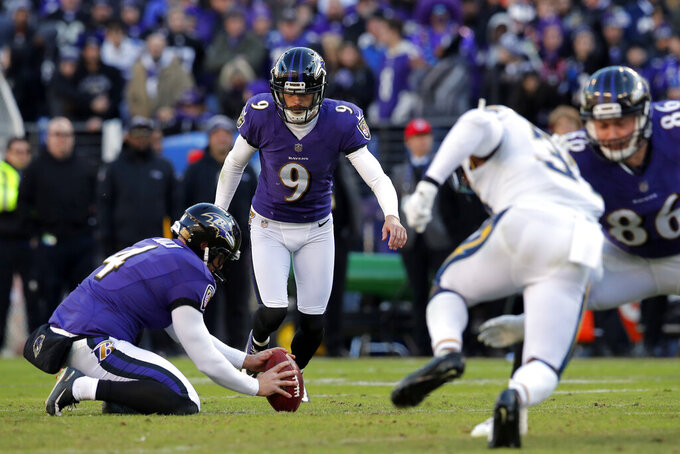 FILE - In this Sunday, Jan. 6, 2019 file photo, Baltimore Ravens kicker Justin Tucker (9) kicks an unsuccessful field goal attempt in the second half of an NFL wild card playoff football game against the Los Angeles Chargers in Baltimore. If the offense stalls, Justin Tucker can be counted on the deliver a long-distance field goal. Tucker has an NFL-record 90.1% accuracy rate on 3-pointers and is the first kicker to produce six seasons with at least 30 field goals.(AP Photo/Carolyn Kaster, File)

BALTIMORE (AP) — In an NFL landscape filled with strong-armed quarterbacks and high-scoring games, the Baltimore Ravens are kicking it old school.

Combining a slick-footed quarterback with an aggressive defense and the most accurate placekicker in NFL history, the Ravens intend to win by running the ball and controlling the clock.

Second-year quarterback Lamar Jackson will probably be spending much of his time handing the football to free agent pickup Mark Ingram or Gus Edwards, who had a team-high 718 yards rushing last year (just ahead of Jackson's 695). The new playbook, written mostly by first-year offensive coordinator Greg Roman, will take advantage of Jackson's ability to slip and slide from the pocket.

Jackson took over last November and led the Ravens to a 6-1 finish, the AFC North title and their first playoff appearance in four years. Not long after Baltimore was eliminated in the first round by the Los Angeles Chargers, first-year general manager Eric DeCosta dealt long-time starting quarterback and 2012 Super Bowl MVP Joe Flacco to Denver in accord with coach John Harbaugh's commitment to a run-first attack.

With Jackson a threat to run, pass or pitch, Harbaugh has an attack he labels "revolutionary" in the current NFL climate.

"Even when he scrambles, he's scrambling to throw, and when it's his last resort, he'll run and show off his talents that way," Ingram said. "But, obviously, if you just look at the last games that he played last year, they had crazy success running the ball."

If the offense stalls, Justin Tucker can be counted on to deliver a long-distance field goal. Tucker has an NFL-record 90.1% accuracy rate on 3-pointers and is the first kicker to produce six seasons with at least 30 field goals.

The defense, ranked No. 1 last season, lost linebackers Terrell Suggs, C.J. Mosley and Za'Darius Smith to free agency. Patrick Onwuasor, now in his fourth season, is poised to replace Mosley in the middle and defensive coordinator Don Martindale is sure to find a way to keep opposing quarterbacks on the run.

The strength of Baltimore's defense is a secondary led by safety Earl Thomas, signed as a free agent to replace the departed Eric Weddle. The loss of nickel back Tavon Young to a neck injury should hurt, but cornerbacks Marlon Humphrey, Brandon Carr and Jimmy Smith, along with strong safety Tony Jefferson, will provide ample coverage downfield.

Martindale can't help but be excited about the backfield, although he's reserving judgment for now.

"Let's start talking about how good they are come September, October, November," he said. "But we do have a lot of depth, and we have a lot of skill. Yes, we do."

DeCosta appears to have done well in his first draft since replacing general manager Ozzie Newsome, who held the title since the franchise moved from Cleveland in 1996.

Wide receiver Marquise Brown, drafted in the first round out of Oklahoma, has speed and good hands, traits the Ravens can't wait to see after he's fully recovered from a foot injury.

In the meantime, rookie receiver Miles Boykin has been impressive in practice and in preseason games and has a very good chance to make the team.

Fourth-round selection Justice Hill runs with power and authority, and quarterback Trace McSorley (sixth round, Penn State) has been good enough in the preseason to warrant keeping behind Jackson and Robert Griffin III.

If Baltimore can't offer protection of Jackson and open holes for Ingram, the new playbook will require drastic editing.

Although Jermaine Eluemunor appears poised to be the left guard, he started only one game last year and has rookie Ben Powers as a backup. James Hurst will be ready to step in at virtually every position but center.

Suggs and Smith combined for 15 1/2 sacks last year, and now it's up to Matthew Judon and others to make up the difference.

"He's going to be a really good pass rusher in this league, and he already is," Martindale said of Judon.

Suggs and Flacco were more than merely very good players. They were leaders in the locker room, and now someone else has to step up.

Jackson has got the offense covered.

"Lamar is a natural leader," Harbaugh said. "He doesn't really need to develop as a leader. Guys gravitate to him."