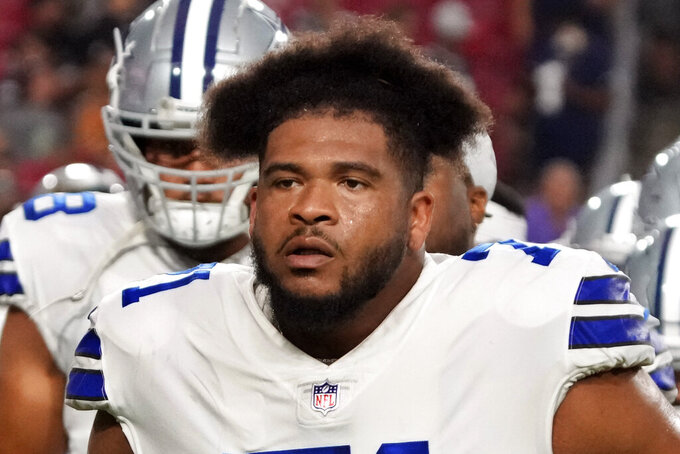 FILE - In this Aug. 13, 2021, file photo, Dallas Cowboys' La'el Collins walks off the field during a preseason NFL football game against the Arizona Cardinals in Glendale, Ariz. The NFL accused Cowboys offensive lineman Collins of trying to bribe a drug-testing official before he was suspended five games for a violation of the substance-abuse policy, according to court documents released Friday, Oct. 8, 2021. (AP Photo/Rick Scuteri, File)

FRISCO, Texas (AP) — The NFL accused Dallas Cowboys offensive lineman La'el Collins of trying to bribe a drug-testing official before the player was suspended five games for a violation of the substance-abuse policy, according to court documents released Friday.

The allegation surfaced in a federal court case after Collins sued the league, its management council and Commissioner Roger Goodell while seeking an injunction to stop the suspension with two games remaining.

The NFL said the person who collects specimens for testing wrote in his notes that in November 2020, Collins asked to meet with him “man to man” and said he felt he was “being tested too much because (they) were seeing each other every day.”

The collector said Collins asked if there was something “we could do” and offered $5,000, and later $10,000, according to the NFL's filing in response to Collins' request for an injunction.

Player agent Peter Schaffer, one of Collins' representatives, strongly denied the allegations of bribery against Collins, who was recovering from hip surgery at the time and didn't play in 2020.

“He allegedly bribed a collector without giving him any money, to look the other way on a test that was negative?” Schaffer said. “No witnesses, no nothing. He walked in in a T-shirt and shorts on crutches. How can you bribe somebody?”

A federal judge heard arguments over the injunction Friday in Sherman, Texas, about 65 miles (105 kilometers) north of Dallas. There was no immediate ruling.

The Cowboys (3-1) play the New York Giants (1-3) at home Sunday. Coach Mike McCarthy said Friday there was not a plan in place for Collins, the starting right tackle, to play against the Giants if the suspension were halted.

Collins’ suspension was announced the day after Dallas’ 31-29 loss to defending Super Bowl champion Tampa Bay in the opener, his first game since 2019.

During an appeal of the suspension, Schaffer called star quarterback Dak Prescott to testify in an attempt to refute the allegation of bribery. Prescott testified to the joking nature of some of the conversations with the test collector, and said he didn't see Collins carrying $10,000 on the day in question.

The league said in its filing Collins had a “long history of discipline for repeated violations" of the substance-abuse policy. Collins missed seven drug tests in a five-week period around the time of the alleged bribe in November 2020, the NFL said.

Schaffer took issue with what he called personal attacks on Collins during Friday's hearing.

“That’s why it was so important to La’el to fight this thing so that people can see he’s not a bad person and he doesn’t have this great history of missing tests and being a bad person,” Schaffer said. “Just the way they just took personal attacks at him. This is one of your players. Find a way to do it without doing the personal attacks. I was embarrassed to be part of the NFL today by the way the NFL lawyers attacked La’el personally.”

The league intended to suspend Collins for the first four games of 2020, but the management council and players' union agreed to a fine. The NFL said Collins continued to miss tests, leading to a five-game suspension that the union negotiated down to two.

An appeal of the two-game ban resulted in an arbitrator reinstating the five-game suspension after the league alleged Collins' attempt at bribery.

Collins' representatives say the NFL falsely claimed the seventh-year player had previously been suspended four games when he hadn't. They also said he was suspended for missed tests when the new labor agreement in 2020 no longer allowed for suspensions over missed tests or positive marijuana tests.

The lineman's representatives said Collins had legitimate reasons for missing tests, including the death of an uncle in Arizona and the death of Cowboys strength coach Markus Paul, who collapsed in the weight room two days before last year's Thanksgiving game.

Collins signed with the Cowboys as an undrafted free agent in 2015. The former LSU player was expected to be a high draft pick, but his name surfaced in the investigation of a woman’s death just before the draft. Collins was cleared in that case.