NFL Notes: Pro Bowl is all in the family for Diggs brothers 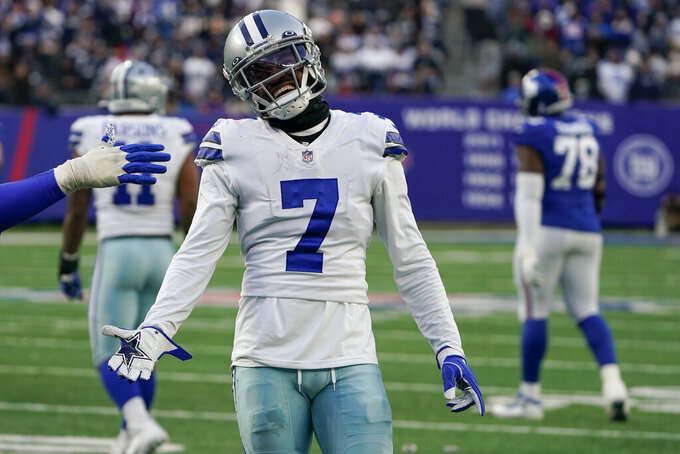 Dallas Cowboys cornerback Trevon Diggs (7) reacts after breaking up a pass in the end zone against the New York Giants during the fourth quarter of an NFL football game, Sunday, Dec. 19, 2021, in East Rutherford, N.J. (AP Photo/Seth Wenig)

The first Pro Bowl for NFL interceptions leader Trevon Diggs of the Dallas Cowboys means the league now has three sets of brothers with invitations to the all-star game.

Diggs joins Buffalo wide receiver Stefon Diggs, who made his second in a row and also was a 2020 All-Pro selection. The other pairs are Kansas City tight end Travis Kelce and Philadelphia center Jason Kelce; and pass rushers Joey Bosa of the Los Angeles Chargers and Nick Bosa of San Francisco.

The Pro Bowl is scheduled for Feb. 6 — the week before the Super Bowl in Los Angeles — at Allegiant Stadium in Las Vegas.

The younger Diggs, who has 10 interceptions and a shot at Dallas' club record of 11 with three games remaining, shared a group video chat with his brother and about 15 family members and friends after the announcement Wednesday.

“That was real cool,” said Trevon Diggs, who's in his second season. “Probably one of my favorite moments of this year, for real, because that’s my brother and I love him to death and just being able to go up there with him, that’s fire.”

Stefon Diggs, who waited five years for his first Pro Bowl nod, said he was happier for his brother than himself.

“He was the epitome of just taking that second-year jump, maturing as a player on and off the field,” Stefon Diggs said. “I was just more proud than anything. I knew he was going, but I still wanted to see it. I saw his picture and I saw his face, I saw him in the Cowboys, I’m like, ‘Yeah, that’s my little brother.’”

It’s the third consecutive year for the Kelce brothers to make it. Travis Kelce leads all of them with seven Pro Bowls, followed by his brother (five), Joey Bosa (four) and Nick Bosa (two).

Seattle free safety Quandre Diggs was voted to the Pro Bowl for the second time in his career and first time as a starter. He has picked off five passes for the second straight season and has already set a career high for tackles.

And yet, he’ll be an unrestricted free agent in a few weeks.

Since arriving in Seattle via trade midway through the 2019 season, Diggs has become one of the top safeties in the NFC. He was asked to play a different role with the Seahawks than his previous time in Detroit. But once he learned how to play the Earl Thomas role in Seattle’s defensive system, Diggs has thrived.

Diggs has 13 interceptions in 35 games with the Seahawks, the latest coming last week when he picked off old friend Matthew Stafford in Seattle’s loss to the Rams.

For now, Diggs is taking the high road about his contract situation and any possible future in Seattle.

“I have a contractual obligation for three more games and my obligations are to the Seattle Seahawks,” Diggs said. “My job is to go out there every Sunday, go play my role, and do what I do, which is to protect the seams, protect the post, and go get interceptions like I have been doing since I’ve gotten here. That’s all I’m worried about in this moment.

Jerry Rice has a reason to root for the Los Angeles Lakers. Rice launched an energy drink, appropriately called G.O.A.T. Fuel that recently partnered with the Lakers.

G.O.A.T. Fuel says it's the first all-Black-owned beverage company in the energy space. It was formed by Rice, his daughter Jaqui Rice Gold and son-in-law Trevion Gold.

“We wanted to put something out there a little bit more healthier,” Rice said. “The beverage field is really tough, and I’m having some of those sleepless nights. Just like when I played football, when we put in those first 15 plays, I knew exactly what was going to happen the next day in those 15 plays. So I’m visualizing putting myself in different scenarios. I’m playing a game in my head. When I have to talk to distributors and do all that stuff, I’m up and I’m getting my game plan together. I want to be the best that I can be.”

Rice, who played 16 of his 20 seasons in San Francisco, tabbed 49ers rookie quarterback Trey Lance as the energy drink’s first official NFL ambassador. Lance, the No. 3 overall pick, is backing up Jimmy Garoppolo while the Niners (8-7) make a playoff push. Rice knows about having a quarterback-in-waiting. He played with fellow Pro Football Hall of Famers Joe Montana and Steve Young.

“Trey is the future for the San Francisco 49ers,” Rice said. “His dedication, his endurance, his tenacity, it reminds me of Joe and Steve. And this guy is really going to be exceptional. ... He’s willing to learn. He wants to be great and he’s going to work for it and he’s going to be a great leader. So those are all the qualities in a quarterback that you want.”

Smith has seen his targets go down while the team has emphasized running the ball. He has 21 receptions in the past seven games after catching 32 balls in the first seven. The Eagles (7-7) have rushed for at least 175 yards in seven consecutive games, going 5-2 to climb into the race for an NFC wild-card spot.

“Being able to give back to them and see the impact I have on them is great,” Smith said.

Despite a decreased workload, Smith leads the Eagles with 53 catches for 741 yards and four TDs. Jeremy Maclin was the last wide receiver to have a 1,000-yard season for Philadelphia in 2014.

As one of the game’s top receivers, Green Bay’s Davante Adams is accustomed to encountering defenses designed to contain him.

But he’d never seen anything quite like what he faced last Sunday at Baltimore.

Not only did Adams typically deal with double coverage, the Ravens occasionally had three guys on him as they took on multiple issues that had decimated their secondary depth. Baltimore’s package was called “17 Bulldog,” in a reference to Adams’ uniform number and the mascot of his alma mater, Fresno State.

When he was asked about the unusual coverage during his weekly Zoom session with reporters, Adams pulled out his phone to show photos he saved detailing how many guys were covering him. Then the 2020 All-Pro discussed how he could combat that type of defense.

“Once they do that, I just start running around in circles, just do whatever,” said Adams, who turned 29 on Friday. “I just turn it into a playground operation. (If) that’s how they want to do it, I do unfair stuff, too. I don’t even know what route I ran, but I don’t think it was the route I was supposed to run on that. In seriousness, I try to do that, but obviously it’s a lot going on as far as people in my way, my path. So, a lot of times it’s going to be tough running my route. It’s just different, man.”

“It’s a sign of respect, but it definitely was annoying," Adams said of facing a defense so devoted to dealing with him that it was named in his honor. "So hopefully it doesn’t happen too much moving forward.”

This has been an eye-opening and humbling season for Giants outside linebacker Jaylon Smith.

The 26-year-old one-time Pro Bowl pick has gone from being a starter with the Dallas Cowboys, taking a two-game pit stop in Green Bay to someone enjoying being in back in the NFL with New York, thanks in part to the COVID-19 outbreak.

Smith had a wild last weekend. He went from working out in Fort Wayne, Indiana, to being signed to the Giants’ practice squad on Friday. He was elevated to the roster as a COVID-19 replacement on Saturday and got to play 17 snaps and made four tackles Sunday against his old buddies on Dallas, taking down haflback Tony Pollard on his second play.

The 34th pick in the 2016 draft, Smith was signed to the Giants’ active roster Monday.

“It’s my first year really dealing with the politics and business side of the National Football League, but I’m a guy that I’ve been through so much, nothing can stop me,” said Smith, who overcame two torn ligaments in his final college game to make the NFL. “I’m a guy that’s going to continue to work, continue to learn. Just a humble servant. But a guy that’s young and got a lot of ball left playing at a high level. It was a blessing to be able to show that versus the team that drafted me last weekend. Now, it’s just about moving forward.”

The way Smith played against Dallas expect him to get more playing time against the Eagles this weekend. He’s not a novice. He started every regular-season game for Dallas from 2018-20.

The Pro Bowl is adding a few new events to its skills competition with participants able to show off their catching abilities and speed.

The NFL announced Pro Bowl participants will compete in the new Best Catch and Fastest Man events in the made-for-TV Pro Bowl Skills Showdown that airs on ESPN, ESPN Deportes and simulcast on ABC on Feb. 3, three days before the all-star game in Las Vegas.

This is the fifth time AFC and NFC all-stars will compete in events before the Pro Bowl. The other competitions include: Precision Passing, where each conference’s two quarterbacks and one non-quarterback try to hit as many targets as possible; Thread the Needle, a head-to-head offense vs. defense accuracy challenge; and Epic Pro Bowl Dodgeball, the showdown's finals in which the all-stars compete in the classic schoolyard game.