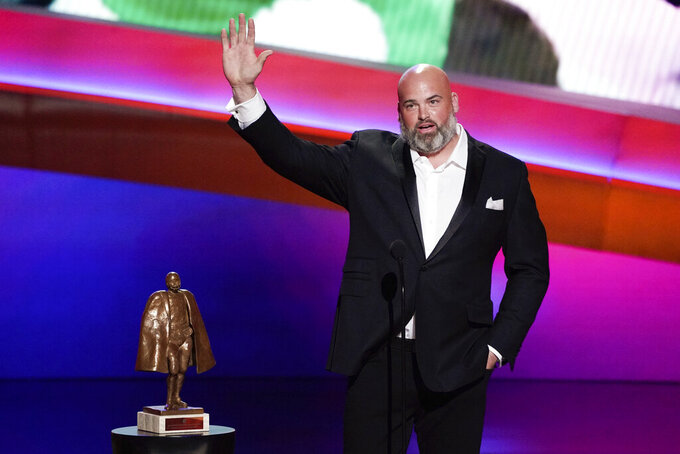 LOS ANGELES (AP) — Cam Heyward was helping one group of children plant in the garden at the Los Angeles Boys & Girls Club, while Harrison Phillips was lobbing passes to another set of kids.

The two defensive linemen were among a group of NFL players who turned out Friday for the annual Walter Payton NFL Man of the Year event, a chance for the league to honor and promote volunteerism. Over a slightly chaotic 90 minutes, players and local children planted, played and stuffed grocery bags with food for the needy, among other things.

Twenty-four of the 32 nominees for the Walter Payton Award, which goes to the player who best demonstrates excellence on and off the field, were on site volunteering. Each team nominates one player for the leaguewide award. Los Angeles Rams offensive lineman Andrew Whitworth won it Thursday night at the NFL Honors show.

Whitworth, whose team plays in the Super Bowl on Sunday against Cincinnati, was not at the event. NFL Commissioner Roger Goodell was mingling with players and others.

Heyward, who was nominated by the Pittsburgh Steelers for his charity, the Heyward House, which benefits at-risk youths, said the best part of working with children is, “to see them open up, to share what they’re going through."

“It means that we’re doing something right,” he said.

Among the kids on the scene was Rio Carrillo, whose free T-shirt was marked all over with NFL players’ signatures by the end of the day.

“I’ve never met them before, so it’s really exciting,” Carrillo said. “I’ve been waiting to see them and I’m just happy.”

For players at the event like Las Vegas Raiders tight end Darren Waller, being involved in the community through his namesake foundation means a great deal. Before becoming a Pro Bowl-caliber player, Waller was addicted to oxycodone as a teenager, overdosed on pills and spent time in a substance rehabilitation program.

“A lot of people can look at me and think that I’m perfect, or that my life has always been this way, and it hasn’t been,” Waller said. “I just want to let them know that anything can be overcome if they go about it in the right manner.”

Cleveland Browns cornerback Denzel Ward’s father, Paul, died at 46 years old of a heart attack while taking a spin class at a gym. His death prompted Ward to start the Make Them Know Your Name Foundation, which is dedicated to raising awareness for heart health.

In addition to his charity, he knows all too well the importance of setting an example for young children.

“I used to be one of these little kids, just looking up to everyone in the community — athletes or NFL stars coming back to the community and giving back,” Ward said. “I just look forward to coming back and having a good time with the kids.”

Though perhaps more used to stuffing the run as a Buffalo Bills defensive tackle, Phillips was right there with everyone else, digging three-foot-deep holes meant for plants. While Carrillo and company got a kick out of players like Phillips etching signatures on their clothing, Phillips understands his contributions extend a bit further.

Andrew Destin is a sports journalism student at Penn State.