NFL on Prime Video latest foray by leagues into streaming 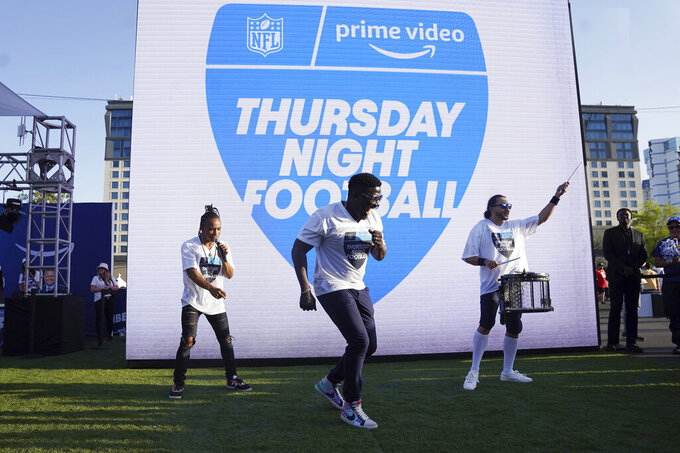 Roger Bennett remembers calling his father in Liverpool, England, and having his father hold the phone next to the television so he could experience his beloved Everton in the FA Cup semifinals.

To say those days are long, thankfully gone, is an understatement. Technology, streaming packages, and the value of sports programming have allowed fans to view their favorite teams or leagues live or on demand.

“We are living in a golden age. You could make a case for soccer that there’s nowhere better to follow or be a fan than the United States just because of the sheer volume of games broadcast and accessible,” said Bennett, the co-host of the “Men in Blazers” podcast.

With streaming services eager to acquire live content, professional sports leagues in the U.S. are taking the next steps. The NFL will be the latest with Amazon Prime Video’s debut of “Thursday Night Football” when the Los Angeles Chargers take on the Kansas City Chiefs.

More than half of this season's 103 games in the Walt Disney Co.’s agreement with the NHL will be exclusively on ESPN+ and Hulu this season. Turner Sports has the option to add games to air on HBO Max as part of its seven-year deal.

MLB began a Friday night doubleheader this year with AppleTV+. A Sunday afternoon slate of games on Peacock ended on Labor Day weekend.

While the NHL and MLB deals were transformative, the NFL’s branching out into streaming has garnered more attention, much like when it signed its first cable deal with ESPN in 1987.

“The NFL deal with Amazon signals what’s ahead for coveted live-action sports content in streaming,” said Jon Christian, the EVP for Qvest, a technology consulting firm specializing in media and entertainment. “Consistent accessibility for desired sports programming on streaming apps is the next step for the large majority of consumers to ‘cut the cord’ from traditional broadcast methods.”

While viewing habits are one reason for the addition of streaming packages, another is technology. The rollout of 5G four years ago made leagues realize that video quality and presentation could be on the same level as what's found on a linear broadcast.

Brian Rolapp, the NFL’s EVP, Chief Media and Business Officer, looked back on the NFL’s first attempt at streaming seven years ago for a regular season game in London as an example of how much things have grown.

“We didn’t think the internet couldn’t sustain that many users at once and have the high-quality experience that you would expect on television,” he said. “We wanted to make sure that the internet could evolve into where it could support audiences at high quality. And we think it’s there.”

MLB recently celebrated the 20th anniversary of becoming the first pro sports league to live-stream a regular season game. The following year, MLB.TV started as a package for out-of-market games.

MLB’s Advanced Media division branched out to create direct-to-consumer services for HBO, World Wrestling Entertainment and Major League Soccer until it was spun off in 2015 as BAMTech Media and eventually bought by Disney.

“We’ve helped a lot of people in the space and continue to again. We think that it’s in everybody’s best interest to have the best experience out there for fans, regardless of the content that’s being consumed,” Noah Garden, MLB’s Chief Revenue Officer. “There’s enough room for everybody. There always has been.”

Amazon isn’t the only service streaming NFL games. ESPN+ will stream the Oct, 30 Denver-Jacksonville game from London, while Peacock begins next season. The league’s “Sunday Ticket” package of Sunday out-of-market games will be completed by the end of the season.

ESPN+ has been at the center of the sports streaming ecosystem for nearly four years, with more than 22.8 million subscribers. With a full slate of soccer, college football, and the U.S. Open tennis tournament, ESPN said ESPN+ had its most-viewed day on Sept. 3.

Russell Wolff, the EVP & GM of ESPN+ & ESPN Networks Business Operations, said he doesn’t think fans are picky about what is on linear vs. streaming, just as long as they can view it.

“The understanding of where things are is as easy as possible for fans, that’s probably the biggest change for fans. I don’t think you have an issue with fans going, ‘Oh, that’s on streaming? I don’t know how to do that, or I don’t want to do that,’” he said.

Peacock, which carries the Olympics and the Premier League, has 13 million subscribers, while Paramount+, with rights to Champions League soccer, has 43 million in more than 60 countries. Paramount does not break out U.S.-only numbers.

Major League Soccer’s deal with AppleTV+, including the production of games, garnered plenty of headlines, but the next big move could come with college football and basketball. If the NFL is a success on Prime Video, it could allow Amazon and Netflix to become more attractive to the Pac-12 or Big 12, whose rights come up in the next couple of years.

“The NFL deal with Amazon signals what’s ahead for coveted live action sports content in streaming,” Christian said. “The U.S. sports streaming is a bit behind at the moment with tremendous opportunity ahead. Currently, the focus on streaming has been more on episodic and full-length, on-demand, recorded content. It will be interesting to see how this plays out as the rights for major sports leagues are not cheap.”