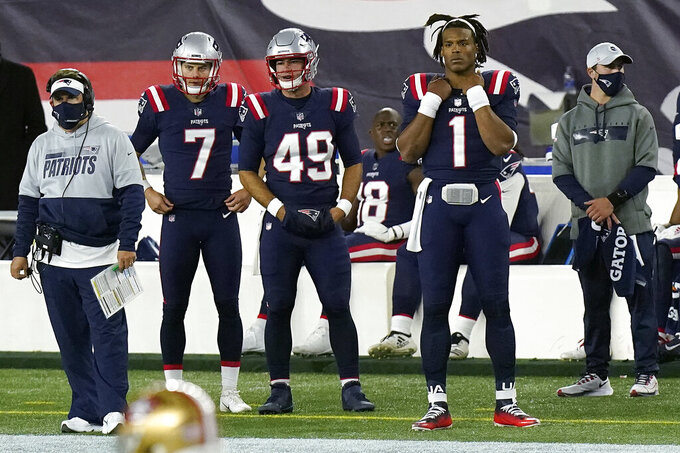 FILE - In this Sunday, Oct. 25, 2020, file photo, New England Patriots quarterback Cam Newton (1) and teammates watches from the sideline during the second half of an NFL football game against the San Francisco 49ers in Foxborough, Mass. The NFL is recommending that players on the sidelines who are not participating in a game or about to go on the field wear protective masks, according to a league management council memo obtained by The Associated Press on Friday, Oct. 30, 2020. Although the NFL stopped short of mandating masks for all players not on the field, it “strongly encouraged” all active players in the bench area who are not about to enter the game to wear masks while standing on the sideline and/or sitting on the bench. (AP Photo/Steven Senne, File)

The NFL is recommending that players on the sidelines who are not participating in a game or about to go on the field wear protective masks.

In a memo obtained by The Associated Press on Friday, the league's management council also suggested the 32 teams enhance physical distancing on the sidelines while the NFL considers expanding the bench area.

Although the NFL stopped short of mandating masks for all players not on the field, it “strongly encouraged” all active players in the bench area who are not about to enter the game to wear masks while standing on the sideline and/or sitting on the bench.

“A player wearing a mask during a close contact has a significantly reduced probability of being designated a ‘High Risk Close Contact’ after an exposure to a COVID-positive individual,” the memo said.

Citing a player who tested positive two days after playing in a game and who had close contacts with 17 teammates and two team staffers — most of which occurred while the player was standing on the sideline — “we are strongly recommending that clubs continue to implement measures to encourage physical distancing among players and staff on the sidelines during games,” the memo said.

While the NFL considers expanding the bench area further down the sideline, teams may consider reconfiguring or adding benches.

“Assistant coaches and members of the football staff should pay particular attention to ensuring that players remain separated while waiting to enter the game, as well as avoiding grouping or bunching,” the league said.

“It’s really a look at how we can expand that physical distancing on the sideline ... the distancing and face masking are critical,” said Dawn Aponte, the NFL’s chief football administrative officer. “Every week we are learning something and trying to share best practices ... with our clubs.”

The league also is offering an additional testing option for bus drivers retained by teams in the away city, prior to the team’s arrival.

The NFL has been particularly proactive in dealing with coaches who have not obeyed protocols — though such efforts might seem unsuccessful given how Panthers coach Matt Rhule and some assistants on Thursday night skirted those rules about properly wearing masks. Several coaches, including Pete Carroll and Jon Gruden, were fined $100,000 for not obeying the requirements, and teams have been fined $250,000 apiece for sideline issues.

“We do try to remain in constant communication with the clubs through memos, phone calls, conference calls, one-offs, trying to remind and educate,” Aponte said. “Everyone needs to lead by example. It is more so about trying to educate and get everyone to adhere to the face-covering protocol.”

Earlier Friday, the NFL said that the Los Angeles Chargers’ game at Denver this weekend isn’t in jeopardy after players on both teams tested positive for the coronavirus.

“No, it is not. There’s no change to the status of the game,” NFL spokesman Brian McCarthy told The Associated Press. “There have been 70-plus instances of a team having a player or players who test positive. The player is isolated and we conduct contact tracing to ensure to mitigate any risk of potential spread among the team.”

New York Giants guard Will Hernandez tested positive this week and most of the team's offensive linemen were barred from the practice facility. Hernandez is in isolation and it is unlikely he will play Monday against Tampa Bay.

The Buccaneers had an equipment staff member test positive for COVID-19 this week.

Two teams, the Tennessee Titans and New England Patriots, have had significant outbreaks of the coronavirus, causing juggling of the NFL schedule. Several other clubs have had isolated cases.

“We have to continue to reinforce all the messages about risk mitigation, something we can never say enough,” said Dr. Allen Sills, the league's chief medical officer. “I think it just speaks to the need to be diligent all the time.”

By Julie Watson 33 minutes ago
By Stephen Whyno 2 hrs ago
By Dennis Waszak Jr. 18 hrs ago
By Tom Withers 19 hrs ago
By Kristie Rieken 22 hrs ago