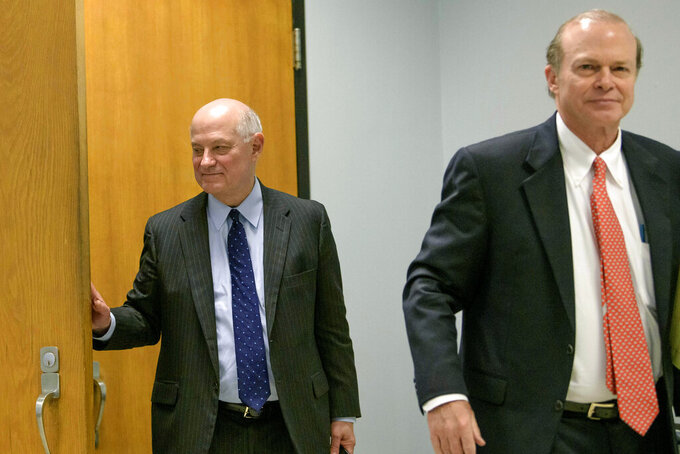 Edward Dirk Wegmann, attorney for the New Orleans Archdiocese, right, and James C. Gulotta, Jr., attorney for the New Orleans Saints, leave a hearing at Orleans Parish Civil District Court in New Orleans, Thursday, Feb. 20, 2020. The New Orleans Saints headed to court Thursday in a bid to block the release of hundreds of confidential emails detailing the behind-the-scenes public relations work the team did for the area's Roman Catholic archdiocese amid its sexual abuse crisis. The request comes amid claims that the NFL team joined the Archdiocese of New Orleans in a “pattern and practice” of concealing sexual abuse — an allegation the Saints have vehemently denied. (AP Photo/Matthew Hinton)

NEW ORLEANS (AP) — An attorney for New Orleans' Roman Catholic archdiocese Thursday strongly defended the New Orleans Saints' behind-the-scenes help in dealing with the clergy sex abuse crisis, saying the legal effort to release hundreds of confidential emails between them is aimed at trying to shame those “who had the audacity” to back the church.

Claims that the NFL team's public relations help was improper are "nothing more than a clear attack on the Catholic faith and the Catholic Church for wrongs of the past that the church has acknowledged,” attorney E. Dirk Wegmann argued.

He added that the emails are private and “should not be parsed through simply for the purpose of annoying or embarrassing — or bringing public scrutiny on — individuals who supported the church.”

The impassioned remarks came amid a court hearing on the Saints' request to keep secret hundreds of emails the team exchanged with the archdiocese in 2018 and 2019. A special master overseeing the proceeding was not expected to rule immediately.

The hearing comes amid claims the Saints joined the church in a “pattern and practice” of concealing sexual abuse — an allegation team officials have vehemently denied.

Attorneys for some two dozen men suing the church say the emails show team officials had a say in deciding which priests the archdiocese named on a 2018 list of dozens of “credibly accused” clergy members. An Associated Press analysis found that roster was undercounted by at least 20 names.

The Saints say their involvement was limited to a team executive preparing church leaders for the publicity surrounding the credibly accused list.

Retired Judge Carolyn Gill-Jefferson heard arguments from attorneys for the archdiocese, the Saints and the AP, which broke news of the emails and filed a motion urging their release.

AP attorney Mary Ellen Roy argued that neither the Saints nor the archdiocese had met their legal burden to demonstrate the emails are confidential. The news organization argued in court papers that any privacy interests “are minimal compared to the public's concern about the roles the Archdiocese and the Saints played in managing public opinion."

“They’re trying to have it both ways," Roy said. “They’re trying to say, ‘Everything we did was fine and dandy, but let us tell you that. Don’t look at them yourselves and make your own determination of that.’”

Gill-Jefferson was appointed “special master” in the dispute by an Orleans Parish Civil District Court judge overseeing a lawsuit against the archdiocese over a longtime deacon accused of abusing schoolchildren decades ago.

The Saints say they have nothing to hide but have asked Gill-Jefferson to apply “the normal rules of civil discovery” in the lawsuit, rather than allowing attorneys for the men suing the church to “selectively disseminate” the emails before trial. The team has said it does not oppose the emails being made public at a later stage of the litigation.

“The Saints motion to maintain confidentiality is not rooted in a desire to conceal information,” Saints attorneys wrote in court filings last week.

Team owner Gayle Benson, a devout Catholic who has donated millions of dollars to church causes, said last week she is proud of the role the team played in assisting the archdiocese, efforts she said were part of a bid to help "heal the community.”

The attorneys for the men suing the church, however, have said the Saints and archdiocese have misled the public about their coordination and the contents of the emails.

They argued in court papers that the public has a right to know “whether this is an untoward relationship designed not only to mitigate the PR fallout from the church sexual abuse crisis but also to spin some of the underlying facts.”

Wegmann, the archdiocese attorney, said the AP's reporting on the Saints' involvement ignited a “media storm.”

“It was like you threw a match in a warehouse full of gasoline,” he said.

All the while, Wegmann added, church leaders have been contending with some claims of clergy abuse that “could not ever have happened" based on the assignments of certain priests.

“The fact that an allegation is made does not mean ... that you get a red letter,” he said.