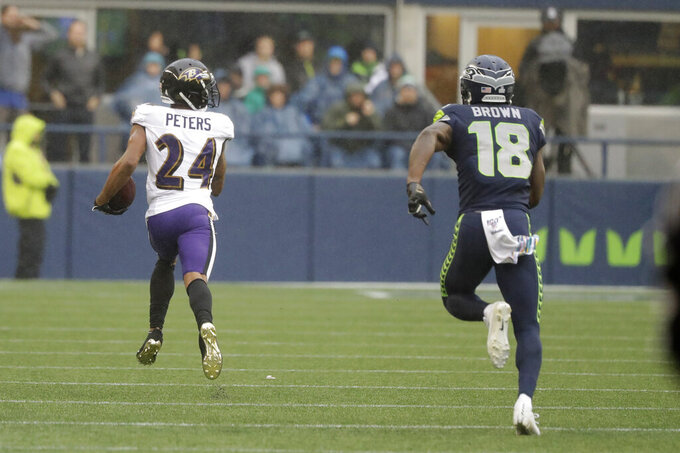 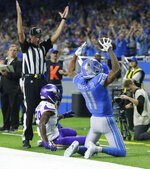 New England at N.Y. Jets, 8:15 p.m. EDT. The AFC East rivals are meeting for the eighth time on "Monday Night Football," with New York ahead 4-3 in the previous meetings. Tom Brady has New England off to a 6-0 start for the fourth time in team history. They'll take on Sam Darnold and the Jets (1-4), who are coming off their first win of the season after the quarterback returned from missing three games with mononucleosis.

— Aaron Rodgers, Packers, threw for 429 yards and five touchdowns, ran for another score and finished with the first perfect passer rating of his career as Green Bay beat Oakland 42-24.

— Ryan Tannehill, Titans, passed for 312 yards and two touchdowns in a 23-20 win over the Los Angeles Chargers, his first start since Tennessee benched Marcus Mariota.

— Teddy Bridgewater, Saints, improved to 5-0 as the fill-in starter for the injured Drew Brees as he threw for 281 yards and two touchdowns in New Orleans' 36-25 victory over Chicago.

— Chase Edmonds, Cardinals, rushed for career highs of 126 yards and three touchdowns in Arizona's 27-21 victory over the New York Giants.

— Lamar Jackson, Ravens, rushed for 116 yards with a touchdown and passed for 143 yards in Baltimore's 30-16 win at Seattle.

— Stefon Diggs, Vikings, had seven receptions for 142 yards in Minnesota's 42-30 victory at Detroit.

— DeAndre Hopkins, Texans, caught nine passes for 106 yards and a touchdown in Houston's 30-23 loss at Indianapolis.

— Cordarrelle Patterson, Bears, had a 102-yard kickoff return for a touchdown in Chicago's 36-25 loss to New Orleans.

— Brett Maher, Cowboys, kicked a 63-yard field on the final play before halftime in Dallas' 37-10 win over Philadelphia, his third career field goal of 62 yards or longer — the only kicker in NFL history to accomplish the feat.

— Micah Hyde, Bills, returned an onside kick 45 yards for a score to help Buffalo rally from a five-point deficit for a 31-21 victory over winless Miami.

— Eli Penny and Michael Thomas, Giants. Penny recovered the ball for a TD after Thomas blocked a punt in New York's 27-21 loss to Arizona.

— Robbie Gould, 49ers, kicked field goals of 28, 22 and 29 yards to provide the only points in undefeated San Francisco's 9-0 win over Washington.

— Darious Williams, Rams, recovered a fumbled punt in the end zone for a score in Los Angeles' 37-10 victory at Atlanta.

— Marcus Peters, Ravens, returned an interception 67 yards for a touchdown in his debut with Baltimore, a 30-16 win at Seattle.

— Chandler Jones, Cardinals, had a career-high four sacks, a forced fumble and a recovery in Arizona's 27-21 victory over the New York Giants.

— Jurrell Casey, Titans, recovered a fumble by Melvin Gordon at the goal line with 15 seconds left, and Tennessee pulled out a 23-20 victory over the Los Angeles Chargers.

— Dante Fowler, Rams, had three sacks and a forced fumble in Los Angeles' 37-10 win at Atlanta.

— Yannick Ngakoue, Jaguars, returned an interception 23 yards for a TD to clinch a 27-17 victory over winless Cincinnati.

Minnesota's Kirk Cousins became the first quarterback in NFL history with three straight games in which he had at least 300 yards passing and a passer rating of 135 or higher. He threw for 337 yards with four touchdowns and no interceptions for a 141.1 rating in the Vikings' 42-30 win at Detroit. ... The Lions' Matthew Stafford has 40,277 yards passing in 147 games, the first player to reach 40,000 in 150 games or fewer. ... Detroit WR Marvin Jones Jr. had four TD catches, making him the fourth player in NFL history to have at least four in two games, joining Jerry Rice, Sterling Sharpe and Bob Shaw. ... Cordarrelle Patterson's 102-yard kickoff return for a touchdown in Chicago's 36-25 loss to New Orleans was the seventh of his career, tied for third in NFL history behind only Josh Cribbs and Leon Washington, who each had eight.

San Francisco beat Washington 9-0 to improve to 6-0 for the first time since 1990, when the 49ers began the season 10-0. They're also the sixth team since 1990 and the first since the 2005 New England Patriots to allow seven or fewer points and 200 or fewer net yards of offense in three consecutive games. ... Cincinnati lost 27-17 to Jacksonville to fall to 0-7 for the first time in 11 years.

Green Bay's Aaron Rodgers passed for 429 yards with five touchdowns, including the 350th of his career, and no interceptions — and also ran for a score — in the Packers' 42-24 win over Oakland. Appearing in his 172nd game, Rodgers surpassed Drew Brees (180 games) as the fastest quarterback to reach 350 TD passes. Rodgers is also the third player with at least 400 yards passing, five TD tosses and a rushing TD in a game in NFL history, joining Norm Van Brocklin and Mark Rypien. He also became the third player in the Super Bowl era with five TD throws and a TD run in a game, joining Rypien and Mark Malone.

Saquon Barkley returned after missing three games with a sprained right ankle, but was held to 72 yards rushing and a touchdown in the New York Giants' 27-21 loss to Arizona. While Barkley said his ankle felt fine, he only had two rushes of 10 yards or more. Half of his 18 rushes were for either negative yards (three) or between just 1 and 3 yards (six).

In his debut for Baltimore cornerback Marcus Peters had a 67-yard interception return for a touchdown to help the Ravens win 30-16 at Seattle. It marked the fifth interception-return touchdown of his career, tied for the third most by a player in his first five seasons in NFL history. Only Ken Houston (nine) and Lem Barney (six) had more. Peters, who was acquired last week from the Rams, is the first player in NFL history to return an interception for a TD for two teams in one season. He had a 32-yard interception return for a score for Los Angeles in Week 4.

Atlanta running back Devonta Freeman and Los Angeles Rams defensive lineman Aaron Donald got into a fight in the third quarter of the Falcons' 37-10 loss, leading to Freeman's ejection. The two locked up after Matt Ryan's pass off Mohamed Sanu's hands was intercepted by Cory Littleton deep in Atlanta territory with the Rams leading 20-3. Freeman had his hands on Donald's facemask before throwing a punch at the much bigger Donald, which appeared to make little if any contact. Umpire Terry Killens finally pulled Freeman away from Donald, taking Freeman to the ground in an apparent unintentional body slam before quickly helping Freeman to his feet. Each player drew unnecessary roughness penalties, and Freeman was tossed for throwing the punch.

The Los Angeles Chargers thought they had scored the go-ahead touchdown not once but twice in the final 44 seconds at Tennessee, only to lose both on review by the replay official. That official also overturned Melvin Gordon being stopped on the Chargers' final play of Los Angeles' 23-20 loss. First, Philip Rivers' pass that Austin Ekeler took 16 yards was ruled a touchdown only to be reversed for not breaking the plane as he was tackled by Kenny Vaccaro and Logan Ryan. After a false start, Malcolm Butler then was flagged for defensive pass interference on Mike Williams in the end zone. Then, Gordon went over right tackle with 34 seconds left for what officials ruled a 1-yard TD, and the replay official then reversed the call for the second time in what became a run for no gain. That set up Gordon's final run with 19 seconds left — and Jurrell Casey recovered a fumble after he was initially ruled down shy of the goal line at the 1.

Earl Thomas made his return to Seattle after nine seasons of playing for the Seahawks, getting five tackles in Baltimore's 30-16 victory. The star safety caught up with a handful of his former teammates before the game and signed a few of his Seahawks jerseys still floating around. He also exchanged jerseys with Russell Wilson after the game. Thomas was given the game ball after the victory.

Atlanta quarterback Matt Ryan injured his right ankle when he was sacked by the Los Angeles Rams' Aaron Donald in the Falcons' 37-10 loss. Ryan's right leg bent awkwardly as he was sacked by Donald and fumbled early in the fourth quarter. Coach Dan Quinn said he did not know the severity of Ryan's injury. Ryan wore a walking boot in the locker room and was not made available for his usual postgame news conference. ... The Falcons also lost running back Ito Smith with head and neck injuries. ... Houston cornerback Phillip Gaines was carted off the field late in a 30-23 loss at Indianapolis with what appeared to be a lower leg injury. Texans wide receiver Will Fuller left during Houston's first series with a hamstring injury and did not return, and safety Tashaun Gipson injured his back late in the first quarter. ... Minnesota wide receiver Adam Thielen suffered a hamstring injury while scoring his seventh touchdown of the season in the Vikings' 42-30 victory over Detroit. ... Arizona running back David Johnson was limited to one carry by ankle and back issues in a 27-21 victory over the New York Giants.

"A lot of times that ball leaves his hand, I'm always like in awe. So, yeah, he's pretty good." — Green Bay coach Matt LaFleur on quarterback Aaron Rodgers, who threw for 429 yards and five touchdowns, and ran for another score in the Packers' 42-24 rout of Oakland.

"I always wanted to play against Michael Vick. I guess I'm getting the new era with Lamar Jackson right there." — Seattle defensive end Jadeveon Clowney on the Baltimore quarterback who had 116 yards rushing and a TD, and 143 yards passing in the Ravens' 30-16 win.