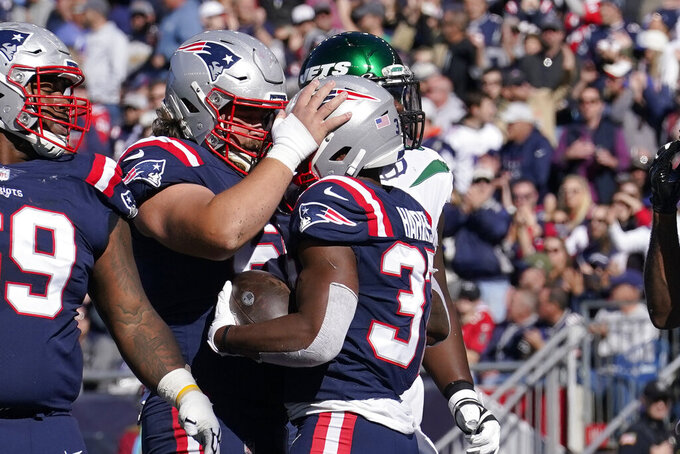 New England Patriots running back Damien Harris (37) is congratulated by center David Andrews after his touchdown during the first half of an NFL football game against the New York Jets, Sunday, Oct. 24, 2021, in Foxborough, Mass. (AP Photo/Steven Senne)

Saints at Seahawks, 8:15 p.m. EDT. New Orleans (3-2) returns from its bye coming off a victory over Washington two weeks ago. Seattle has dropped two straight after last week’s 23-20 overtime loss to Pittsburgh in its first game without quarterback Russell Wilson. The Seahawks (2-4) will have Geno Smith under center again in Wilson's place.

— Joe Burrow, Bengals, threw for a career-high 416 yards and three touchdowns, including a pivotal 82-yarder to rookie Ja’Marr Chase in the third quarter of Cincinnati's 41-17 rout of Baltimore.

— Damien Harris and J.J. Taylor, Patriots, each ran for two scores and Harris finished with 106 yards on 14 carries in New England's 54-13 win over the New York Jets.

— Jonathan Taylor, Colts, had 107 yards and a touchdown on 18 attempts in Indianapolis' 30-18 victory at San Francisco.

— Leonard Fournette, Buccaneers, ran for 81 yards and a touchdown to help Tampa Bay cruise past Chicago 38-3.

— Eli Mitchell, 49ers, rushed for 107 yards and a score in a losing cause as San Francisco lost to Indianapolis 30-18.

— Derrick Henry, Titans, had 86 yards on 29 carries and saw a five-game stretch of 100-yard rushing games snapped, but also threw a touchdown pass in Tennessee's 27-3 win over Kansas City.

— Quarterback Taylor Heinicke, Washington, ran for a game-high 95 yards on 10 carries in a 24-10 loss at Green Bay.

— Ja'Marr Chase and C.J. Uzomah, Bengals. Chase had eight catches for a team rookie-record 201 yards, including a pivotal 82-yarder in the third quarter of Cincinnati's 41-17 win over Baltimore. Uzomah caught two touchdown passes.

— Mike Evans and Chris Godwin, Buccaneers. Evans had six catches for 76 yards and three TDs in Tampa Bay's 38-3 win over Chicago, while Godwin had eight receptions for 111 yards and a score.

— A.J. Brown, Titans, had eight receptions for 133 yards and a touchdown in Tennessee's 27-3 win over Kansas City.

— Terry McLaurin, Washington, had 122 yards receiving and a touchdown on seven catches in a 24-10 loss at Green Bay.

— Younghoe Koo, Falcons, made a 36-yard field goal as time expired to give Atlanta a 30-28 win over Miami.

— Nick Folk, Patriots, kicked two field goals in New England's 54-13 win over the New York Jets to give him 301 for his career and making him the 35th NFL player to reach 300 for his career.

— Denico Autry, Titans, had two of Tennessee's four sacks in a 27-3 victory over Tennessee.

Tom Brady became the first player to throw 600 career touchdown passes and the Tampa Bay Buccaneers routed the Chicago Bears 38-3 for the best seven-game start in franchise history at 6-1. The 44-year-old Brady has 602 TD passes and has now thrown at least 20 TD in a season a record 19 times. ... New England’s Nick Folk made two field goals, giving him 301 for his career. He’s the 35th player to reach 300 and is fifth active kicker to reach the mark, joining San Francisco’s Robbie Gould, Green Bay’s Mason Crosby, Arizona’s Matt Prater and Baltimore’s Justin Tucker. ... Cincinnati rookie wide receiver Ja'Marr Chase has 754 yards receiving, the most for a player through the first seven games of his career since the AFL-NFL merger.

Cincinnati snapped a five-game losing streak against Baltimore with a 41-17 victory. The Bengals lost the opening coin toss for the first time in a while, though, having had won 11 straight tosses — nine pregame and two at the start of overtimes — before Sunday. ... Arizona remains the NFL’s only undefeated team as the Cardinals improved to 7-0 for the first time since 1974 with a 31-5 win over Houston. ... New England earned its 12th straight victory and sixth consecutive season sweep over the New York Jets with a 54-13 rout. The 54 points were the most allowed by the Jets since losing 55-21 at New England on Oct. 29, 1978. It is the fourth-most points ever allowed by New York. ... San Francisco's fourth straight loss, 30-18 to Indianapolis, kept the 49ers winless at home for more than a year since beating the Los Angeles Rams on Oct. 18, 2020.

FROM TIGERS TO BENGALS

Joe Burrow threw for a career-high 416 yards and three touchdowns, including a pivotal 82-yarder to rookie Ja’Marr Chase in the third quarter, and the Cincinnati Bengals won their AFC North showdown against the Baltimore Ravens in style, pulling away in the second half for a 41-17 victory Sunday. The former LSU teammates were too much for Baltimore to handle, and Cincinnati’s offense moved the ball pretty easily from the middle of the second quarter on. Chase had eight catches for 201 yards, easily the most productive performance of his impressive debut season. He broke Speedy Thomas’ franchise rookie record of 177 yards receiving, set in a 1969 game at Denver.

Washington outgained Green Bay 430-304, but had five scoreless trips inside the Packers 30-yard line in a 24-10 loss on Sunday. Washington had back-to-back series that ended inside the 5, but still couldn't get in.

Before Sunday, Packers opponents had scored touchdowns every time they reached the red zone.

Mahomes was slow to get up after taking a knee to his head. He went to the medical tent and didn’t return with Chad Henne replacing him late. He finished with 206 yards passing and 35 yards rushing.

Mahomes has been intercepted in six straight games, the longest stretch of his career. He had 11 interceptions combined over 2019 and 2020 and has nine this season. His fumble with 1:46 left in the first half was his second this season, giving him 11 turnovers for the season. That’s the most Mahomes has ever had in a single season even counting the playoffs. He had only nine in 17 games in 2019 and 10 in 18 games in 2020.

Tennessee running back Derrick Henry’s 5-yard TD pass to MyCole Pruitt in the Titans' 27-3 win over Kansas City made him the second NFL player in the Super Bowl era to run for at least 10 TDs and throw a TD pass in his team’s first seven games. LaDainian Tomlinson was the first in 2005.

Henry, the NFL’s rushing leader, did snap a five-game stretch of 100-yard rushing games. He finished with 86 yards on 29 carries.

With most of his top skill players sidelined with injuries, Daniel Jones did a little of bit of everything for the New York Giants. He ran the ball, threw a touchdown pass and even made a great catch on a trick play in a 25-3 win over Carolina.

Jones threw a 5-yard TD pass and made a spectacular one-handed 16-yard catch on the game’s only meaningful touchdown drive.

Jones’ touchdown pass to Dante Pettis survived a very long replay review. Pettis coincidently made the slightly overthrown pass on the flea flicker which Jones caught with the finger tips of his throwing hand.

Jones, who finished 23 of 33 for 203 yards with six carries for 30 yards, didn’t remember ever catching a pass in college. He laughed when asked if teammates are calling him ‘Odell” after one-time Giants and current Cleveland Browns receiver Odell Beckham Jr.

Derek Carr threw for 323 yards, completing 31 of 34 pass attempts with one touchdown, and the Las Vegas Raiders defeated the Philadelphia Eagles 33-22 for their second straight win since former coach Jon Gruden resigned Oct. 11 because of offensive emails he sent before being hired in 2018.

The Raiders (5-2) outgained Philadelphia 443-358 in a dominating performance that saw Las Vegas score on five straight possessions after its first series ended with Carr being intercepted inside the Eagles 5-yard line.

Under interim coach Rich Bisaccia, the Raiders have outscored Denver and Philadelphia 67-46 collectively, and outgained both 869-779.

It was the first time Hopkins and J.J. Watt had played against Houston, which is where both grew into stars before coming to the Cardinals. Watt signed with Arizona during the past offseason, while Hopkins was acquired by the Cardinals in a trade in 2020. Both had good moments on Sunday. Hopkins caught a 1-yard touchdown in the second quarter while Watt added a tackle for loss.

Ertz was making his debut for the Arizona Cardinals, a little more than a week after he was acquired in a trade with the Philadelphia Eagles.

New York Jets rookie quarterback Zach Wilson suffered a knee injury in the second quarter of a 54-13 loss to the New England Patriots. Wilson said he felt a “pop” and a “twist” in his knee when Patriots linebacker Matt Judon fell on the back of his legs early in the second quarter. The second overall draft pick said the initial diagnosis was an injury to his posterior cruciate ligament, and he was to have an MRI on Monday. ... Veteran Patriots safety Devin McCourty left with an abdominal injury. The Patriots also lost defensive lineman Carl Davis (wrist), tight end Jonnu Smith (shoulder), linebacker Harvey Langi (knee) and right guard Shaq Mason (abdomen). ... Chiefs quarterback Patrick Mahomes was evaluated for a concussion late in Kansas City’s 27-3 loss to Tennessee. He took a knee to his head on a sack by Denico Autry but said after the game he was fine. Kansas City defensive end Chris Jones strained a groin muscle, and safety Tyrann Mathieu hurt his ribs. ... Las Vegas lost running back Josh Jacobs to a chest injury after he ran for 29 yards on six attempts, including a touchdown, in the Raiders’ win over the Philadelphia Eagles.

“We’re starting to earn respect.” — Cincinnati coach Zac Taylor said after the Bengals pulled away in the second half for a 41-17 victory over Baltimore to tie the Ravens for the AFC North lead at 5-2.

“You have the right mindset and have courage. He has it. He’s a special player. I personally think he’s been criminally underrated if you look at his career.” — Atlanta coach Arthur Smith on quarterback Matt Ryan, who made two big throws in the closing moments to set up the winning field goal in the Falcons' 30-28 victory at Miami.