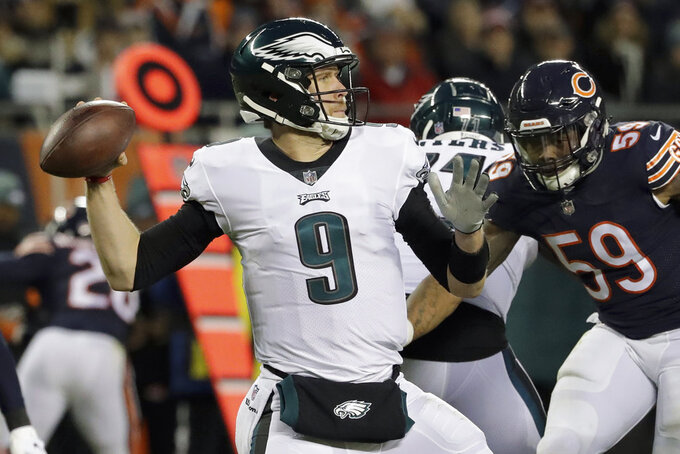 Indianapolis at Kansas City, 4:35 p.m. EST. Andrew Luck threw two touchdown passes to lead the Colts (11-6) to a wild-card playoff victory at Houston. The Colts, who opened the season 1-5, continued an impressive run by winning their fifth straight and for the 10th time in 11 games. Patrick Mahomes and the Chiefs (12-4) earned the No. 1 seed in the AFC for the first time since 1997. They did it behind Mahomes, who broke out with one of the best seasons in NFL history for a first-year starter with 5,097 yards and 50 touchdowns.

Dallas at L.A. Rams, 8:15 p.m. EST. Ezekiel Elliott rushed for 137 yards and the go-ahead touchdown in the fourth quarter in a 24-22 wild-card win for the Cowboys (11-6) over Seattle. It was the first playoff win for Elliott and quarterback Dak Prescott on their second try after losing a divisional game as rookies two years ago. The Rams (13-3) boast one of the NFL's best offenses with Jared Goff and Todd Gurley running coach Sean McVay's innovative schemes to perfection for long stretches of the franchise's best regular season since 2001.

— Nick Foles, Eagles, hit Golden Tate with a 2-yard touchdown pass on fourth down with 56 seconds remaining to lift Philadelphia past the Chicago Bears 16-15.

— Philip Rivers, Chargers, went 22 for 32 for 160 yards for Los Angeles, providing just enough offense to help the Chargers beat Baltimore 23-17 and get even for a loss to the Ravens two weeks ago.

— Melvin Gordon, Chargers, had a touchdown run in Los Angeles' 23-17 win at Baltimore.

— Michael Crabtree, Ravens, caught two touchdown passes on his only catches of the game in Baltimore's 23-17 loss to the Los Angeles Chargers.

— Michael Badgley, Chargers, kicked franchise playoff-record five field goals — connecting from 21, 53, 40, 34 and 47 yards — to help lead Los Angeles past Baltimore 23-17. He made up for a 41-yard attempt that was blocked by Za'Darius Smith in the third quarter.

— Tarik Cohen, Bears, returned a kickoff 35 yards to put Chicago great starting position — at its 42 — on its final possession in a 16-15 loss to Philadelphia.

— Michael Bennett and Tim Jernigan, Eagles. Each had a sack in Philadelphia's 16-15 victory at Chicago.

Baltimore's 23-17 loss to the Los Angeles Chargers marked the first time in the Ravens' seven postseason appearances under coach John Harbaugh that they've lost their opening game. ... The Chargers advanced to play New England, but are 0-7 against Tom Brady and the Patriots — including the playoffs — since Philip Rivers became the starter in 2006. Rivers' only win against New England came in 2008 against Matt Cassel. ... The two games Sunday featured a combined seven field goals and no touchdowns in the first half. It marked the first time in NFL postseason history that there were multiple playoff games on the same day and no first-half touchdowns, according to STATS. ... Chicago is 1-15 all-time in playoffs when trailing after three quarters, including its 16-15 loss to Philadelphia.

Baltimore's 21-year-old Lamar Jackson became the youngest quarterback to start an NFL playoff game, but got off to a rough start in the Ravens' 23-17 loss to the Los Angeles Chargers. The Heisman Trophy winner from Louisville, who turns 22 on Monday, had a passer rating of 0.0 early in the fourth quarter before finishing at 78.8 by going 14 for 29 for 194 yards, two fourth-quarter TDs, one pick and one lost fumble. He was sacked seven times, and rushed for 54 yards. The Ravens were making their first playoff appearance since 2014.

Chicago kicker Cody Parkey hit the left upright and then the crossbar with a field-goal attempt from 43 yards with 10 seconds remaining, and the Bears fell to Philadelphia 16-15. He was 11 of 12 in the fourth-quarter on field goals before missing the biggest kick of his career. Parkey hit the uprights four times in a game against Detroit at Soldier Field earlier this season.

Los Angeles' 23-17 win at Baltimore was not without controversy. The Chargers used a 1-yard touchdown run by Melvin Gordon to take a 20-3 lead with 14:44 left, a score that came one play after Gordon lost control of the ball at the goal line and the Ravens took it the other way for a touchdown. But he was called down by contact and a replay confirmed the call. "He had control of the football as he hit the ground," said NFL Senior Vice President of Officiating Al Riveron.

No team has repeated as Super Bowl champion since New England in 2004, and Philadelphia is a sixth seed this year. The previous sixth seed to win the NFL title was Green Bay in the 2010 season; the Packers won the NFC championship at Soldier Field that season.

Chargers cornerback Brandon Facyson missed the second half of Los Angeles' 23-17 win at Baltimore with a concussion. ... Ravens defensive tackle Michael Pierce hurt an elbow in the third quarter. ... Chicago tight end Trey Burton was inactive for the Bears' game against Philadelphia with a groin injury.

"I'm standing there, and they were just like chanting Flacco's name. I love 'Flac,' but (Jackson) got us here. So for the fact that you're a fair-weather fan that quickly when things go rough — you turn your back on him? — that just got under my skin a little bit. So I just went to them and told them, like, 'Yo, you either ride or die or you get ... out of here.'" — Ravens cornerback Jimmy Smith, who didn't like fans urging Joe Flacco to replace Lamar Jackson as the rookie quarterback struggled in Baltimore's 23-17 loss to the Los Angeles Chargers.

"I think the big thing is, we saw some adversity tonight in the first half (and) I had a couple of turnovers. I think the big thing is that no one loses faith, no one stops believing, everyone just keeps talking, keeps believing in one another, and we just rallied. Our defense really kept us in this game." — Philadelphia quarterback Nick Foles after the Eagles defeated Chicago 16-15.