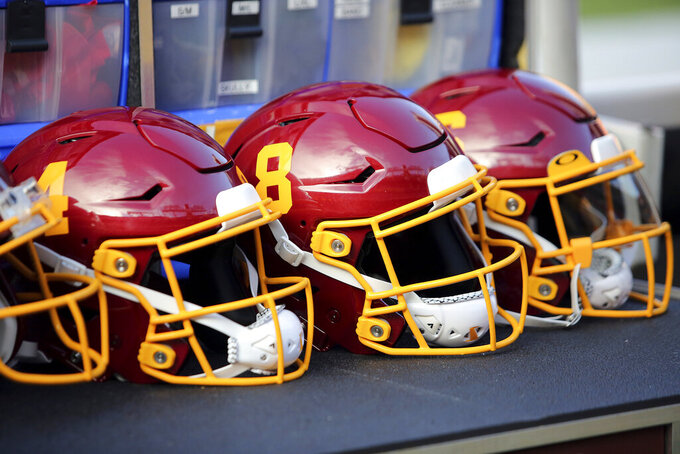 FILE - Washington Football Team helmets are shown before an NFL preseason football game against the Cincinnati Bengals in Landover, Md., in this Friday, Aug. 20, 2021, file photo. The NFL Players Association says it has sent a formal request to the league for information about Washington's practice facility being searched last week by federal authorities. (AP Photo/Daniel Kucin Jr., File)

ASHBURN, Va. (AP) — The NFL Players Association said Wednesday it sent a formal request to the league for information about Washington’s practice facility being searched by federal authorities last week.

Head athletic trainer Ryan Vermillion was put on administrative leave for what a Washington spokesman called an ongoing criminal investigation unrelated to the team.

Two people familiar with the matter told The Associated Press that federal law enforcement officials, including agents from the U.S. Drug Enforcement Administration, served a search warrant at the facility last week. Another search warrant was served at a local home, according to one of the people.

The NFLPA said the situation “directly impacts player health and safety. The NFLPA insisted on language in our collective bargaining agreement that obligates clubs to adhere to all state and federal laws and regulations. We look forward to learning more so we can protect our players."

Veteran safety Landon Collins, Washington's NFLPA rep, said he was unaware of the request but was cool with the statement that was sent out.

Washington returned to practice Wednesday without Vermillion, who did not travel for its game at Atlanta last week. Former trainer Bubba Tyer, who retired in 2009, was at the facility and on the field during practice.

“He came in to help out, and that's it: He’s got time and he wanted to come and just help us,” Rivera said. “We’re going to do everything pretty much by committee. I go down there and I check in, and I check in with the trainers and then I check in with our therapists and we go from there.”

Rivera has worked with Vermillion for more than a decade dating to their time together in Carolina and brought him to Washington after he was hired and put in charge of football operations.