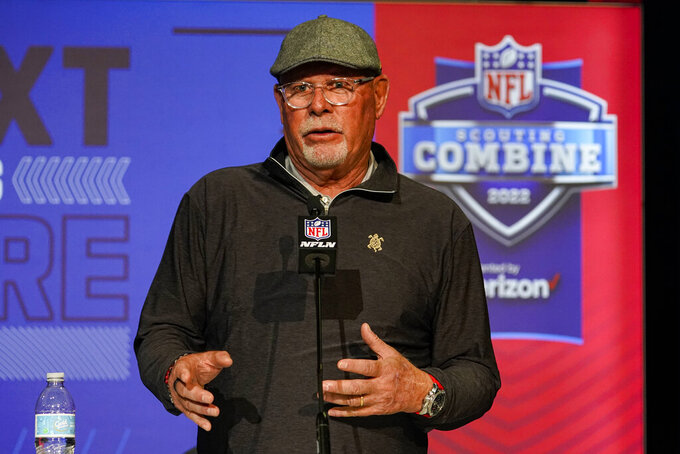 INDIANAPOLIS (AP) — All the Buffalo Bills wanted in January was one more chance to beat Kansas City.

Now they're trying to make sure no NFL team begins the offseason as it did.

On Tuesday, more than a month after enduring a crushing AFC divisional round loss without ever touching the ball in overtime, Bills general manager Brandon Beane threw his support behind a proposal to change the league's postseason rules.

“Ours is going to be more instead of one possession and then you get the other possession, is a time, similar to in basketball, you play five minutes," Beane said.

“Baseball, both teams get the top half and the bottom half (of an inning). So a time limit, and I’m talking about postseason only. That way, both teams will definitely have a chance and maybe even more than one possession."

Beane acknowledged the league's competition committee could field multiple proposals during this week's meeting at the annual NFL scouting combine in Indianapolis, joking there could be one from all 32 teams. No decision is expected this week.

And it's not just current Bills jumping on board.

Colts coach Frank Reich, the former quarterback who orchestrated the NFL's greatest comeback during his tenure in Buffalo, also supports the move. Reich is a first-year committee member and is uncertain what that might include.

“It’s basically something that would guarantee each team a possession,” Reich said. “My opinion is that I think there’s a place for both teams to have a possession. But I can see both sides of it. You’ve got 60 minutes to win a game, so go win the game. Or play defense.”

The NFL last changed its overtime rules in 2010 after complaints the coin flip often determined the winner. Under the current system, if the opening possession of overtime results in a touchdown or a defensive score, the game ends. That's what happened to Buffalo.

But if the opening possession results in a field goal, the opposing team gets a chance to tie the score or win the game. Those rules apply throughout the entire season.

And now the Bills want every playoff team to get one last opportunity.

“I think, experiencing what we experienced overall, I think there’s a better way out there," Bills coach Sean McDermott said. “We’ve got some ideas and I think they’ll help move the game forward. And we’ll see where it goes."

Exactly one month after Brady announced his retirement, Arians acknowledged Brady's replacement already may be on the roster. Tampa Bay drafted Kyle Trask in the second round last year.

But if Brady changed his mind, well, the Bucs would welcome him back.

“That door is never closed. Whenever Tom wants back, he’s back," Arians said.

Would the Bucs be as accommodating if Brady wanted to play for another team?

He doesn't need another quarterback after selecting Trevor Lawrence last season and even though this year's college quarterback class is light on star power, it's created speculation about a possible trade.

But it might not be the same kind of seller's market Colts general manager Chris Ballard found in 2018 when the shipped the No. 3 overall selection to the New York Jets.

“You need a little luck and you need someone to covet a player up high," he said. “That was a really heavy quarterback draft, people were reaching up to get them so it worked out. This year, I don't know."

Giants general manager Joe Schoen said difficult decisions are forthcoming as he finagles his team under the salary cap. He might even consider trading running back Saquon Barkley, the No. 2 overall pick in 2018.

“We’re still working through that, but I’m open to everything, whether it’s trading player for player. I’ll listen to anybody if it’s trading a couple players,” Schoen said.

“Again, we’re in a situation where unfortunately we have to get under the salary cap and we’re not in very good salary cap health. Again, I’m not going to say yes to every deal, but I’m definitely going to listen and I’ll be open to the situations that are best for the New York Giants.”

One day after league officials announced the Green Bay Packers would play in London in the 2022 season, general manager Brian Gutekunst said the team's large, loyal fan base was enthused. Green Bay is the only NFL team that hasn't played a regular-season game in London since the international series began in 2007.

“Our fans are excited," Gutekunst said. “I've been getting texts ever since the announcement. So Packers Nation will show up strong."